Porto’s Feast for the Senses - 405 Magazine 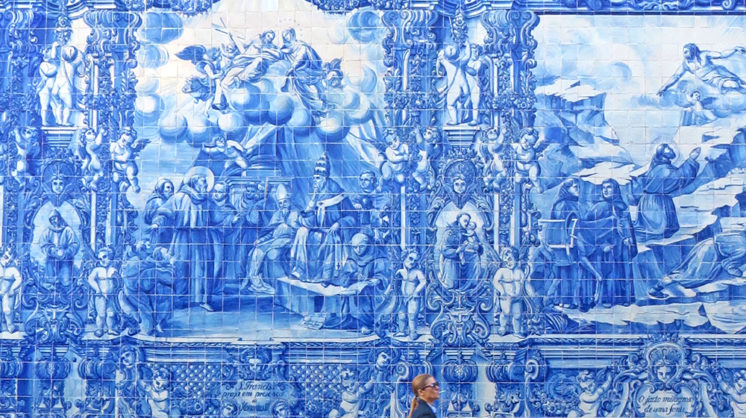 Portugal is eye-candy country – and no place more so than Porto, the city which gave its name to port, the popular dessert wine. Located at the mouth of the Duoro River, its pastel buildings with red tile roofs climb steep hills. Magnificent churches sport curlicued spires and impressive domes. And everywhere are examples of the iconic ceramic tiles of Portugal – colorful displays that sometimes cover entire buildings.

I’m a big fan of hop-on, hop-off bus tours when exploring a new location. We bought a two-day ticket for Yellow Bus Tours, and found it not only helped getting to all the sites we wanted to visit, but also gave us a good overview of newer parts of the city. (Plus, by saving our ticket receipts, we saved 10 percent on our bus tickets in Lisbon.)

Traveling with family means give and take – we each had some “must sees” on our lists: Husband Jack wanted to take a river cruise, daughter Zoe had her eye on the Marionette Museum and I wanted to see everything.

We started with a walk past the Chapel of Souls, a church wrapped in ceramic murals of the lives – and mostly the deaths – of St. Francis and St. Catherine. Running south from there is Rua Santa Catarina, a major shopping/eating street, and one we often used on our route to and from the apartment.

To get the flavor of the city, we visited Bolhão Market, since 1839 the place to buy fresh fish, produce, flowers, meat and much more. Portugal has about one-third of the world’s cork oak forests and produces half of the cork used in the world, which meant several stalls carried items– from jewelry to purses – made from it.

The nearby Avenida dos Aliados is a major boulevard through the area. Reminiscent of the Ringstrasse in Vienna, it is a wide thoroughfare with park-like medians. Sidewalk cafes and high-end shops line the sides of the streets. Even the sidewalks are beautiful, with black and white tile designs.

The first stop on our open-top, double decker bus tour was one of my musts: the Livraria Lello, a 1906 Belle Epoque beauty said to be the oldest bookstore in Porto. The crown jewel of its fantastic art nouveau interior is an elaborate double staircase. It’s such a popular attraction that you have to buy a ticket to go inside, but you get your money back if your purchase exceeds the entry fee. 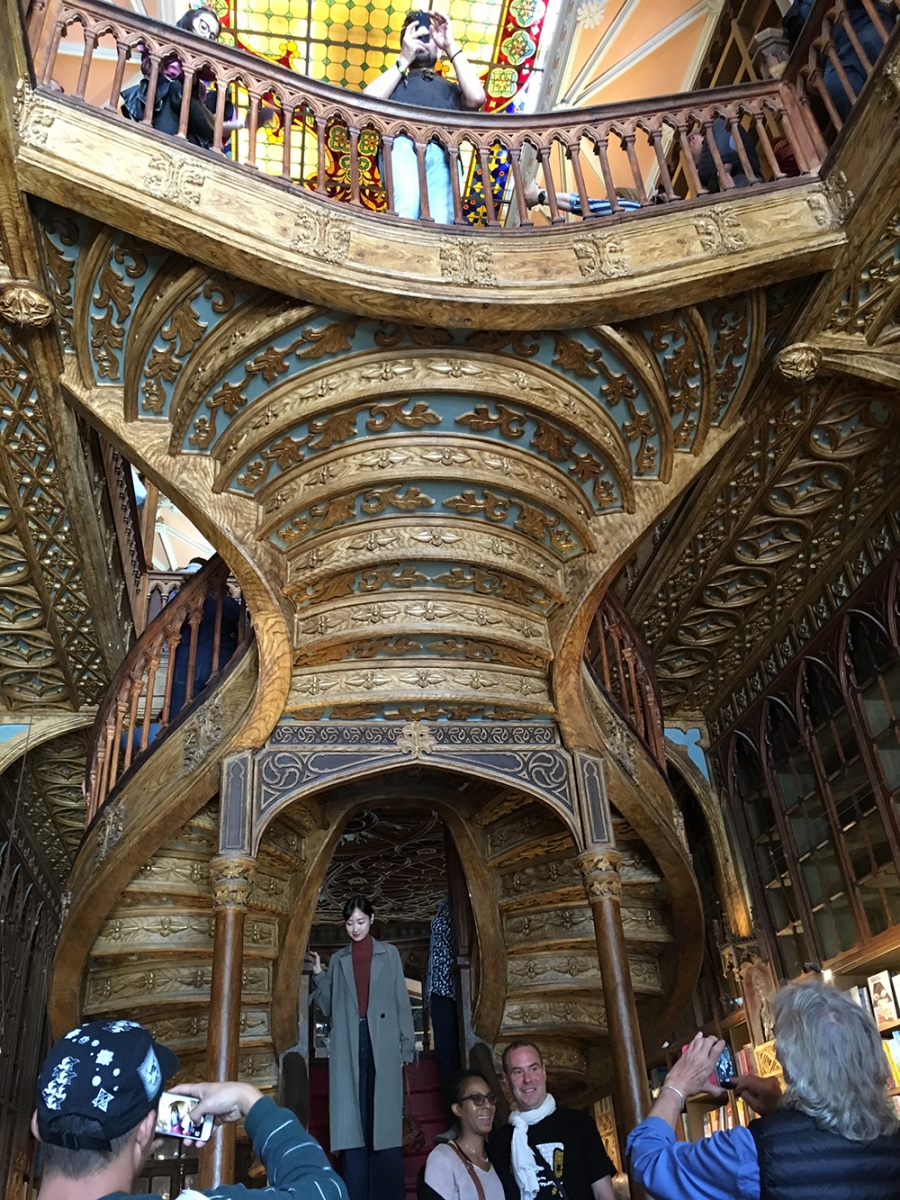 It was a short walk to a two-fer – two magnificent cathedrals almost side by side. The older of the two, the Igreja dos Carmelitas, was built in the 17th century and was the church of the Carmelite nuns. Though rather plain on the outside, the inside is lavishly decorated. The newer church, Igreja do Carmo, was built in Baroque style in the 18th century, and monks lived in its monastery. The interior, with seven altars, glitters with gold. The east exterior wall is covered with azuelos (tiles), creating a blue and white mural depicting the founding of the Carmelite order.

In between the two is what might be the world’s narrowest house. Just over a yard wide, it was occupied until the 1980s. Its purpose was to serve as an architectural bundling board between the nuns and the monks.

Back on the bus, we headed to the Ribiera district, the oldest and most traditional part of Porto. Across the Duoro, which is spanned here by a bridge designed by a partner of Gustave Eiffel, is Vila Nova de Gaia, home to the port houses.

We discovered that even in the off-season, advance reservations to tour are a necessity. Not having the time to wait, we settled for a visit to the Calem tasting room, enjoying a sampling of several kinds of port.

More bus touring the next day brought us near the Museu das Marionetas, but when we arrived, it was closed for two hours for lunch. Fortunately, across the narrow street we found a tiny café, Puorto, which turned out to be a treasure. Barely two tables wide, it specialized in sandwiches including the francesinha, a local tradition. Supposedly brought to Portugal by a returning emigrant, it bears a slight resemblance to a croque monsieur. It features a variety of meats between two slices of bread, cheese on top, drenched in a tomato/beer gravy and often capped with a fried egg. Do not leave Porto without trying one.

The Marionette Museum proved to be fascinating; while children may enjoy puppets, there’s a big adult audience for the productions of the company associated with the museum. Though small, the museum’s collection included a good variety, from glove puppets to giant figures. Productions range from folk tales to Shakespeare and Beckett. 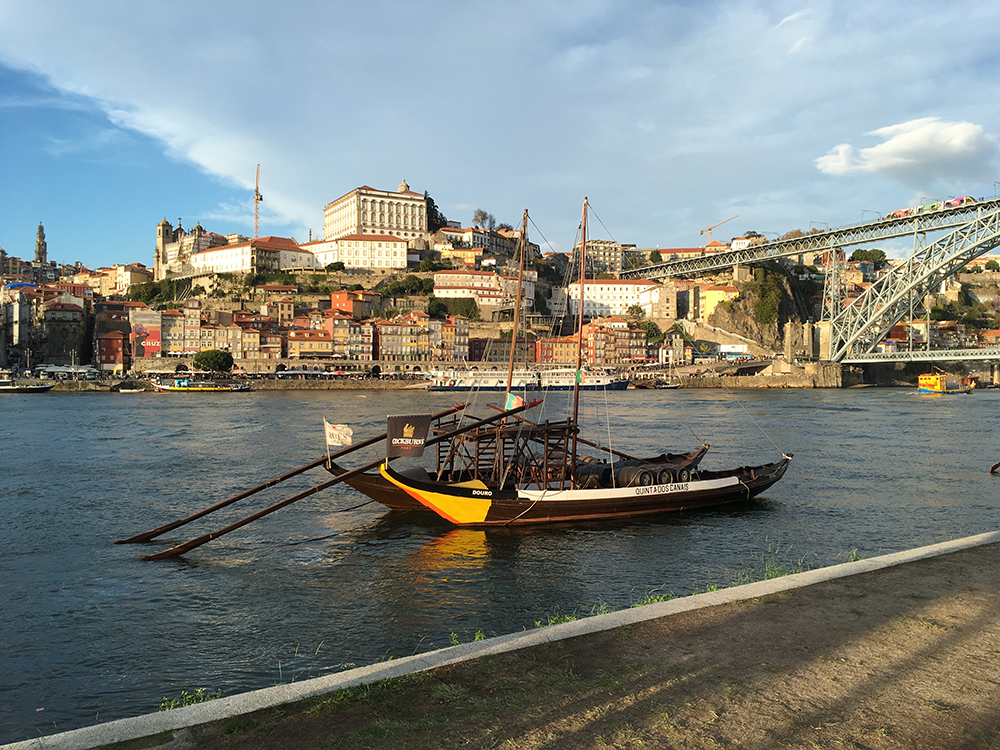 Our last day in Porto was given to a cruise on the Duoro River. The local visitors’ bureau had suggested a Barcaduoro vessel. We met at the Bento train station – worth a visit to see the azuelos even if you’re not catching a train – and took a two- hour trip to Régua, before boarding the boat to cruise back to Porto.

It was early November, and the weather was perfect. Trees were still green; the steep hillsides were zig-zagged with terraced vines. (The Duoro valley is famous for its grapes, particularly the ones used in making port.) The five-hour trip was restful, punctuated with insights from the guide. We were served a hearty lunch, traveled through locks on the river and enjoyed the peaceful countryside.

We arrived at the pier in Gaia at sunset. Grabbing a cab, we traveled over Eiffel’s bridge, the Dom Luis, back to Rua Santa Catarina and one of the most famous restaurants in Porto, the Majestic Cafe. With a history going back to the ’20s, this art nouveau stunner provided a majestic coda to our trip.

Three days was not enough to spend in this delightful city. Usually, I’m looking forward to my next destination. Porto will keep me looking back.