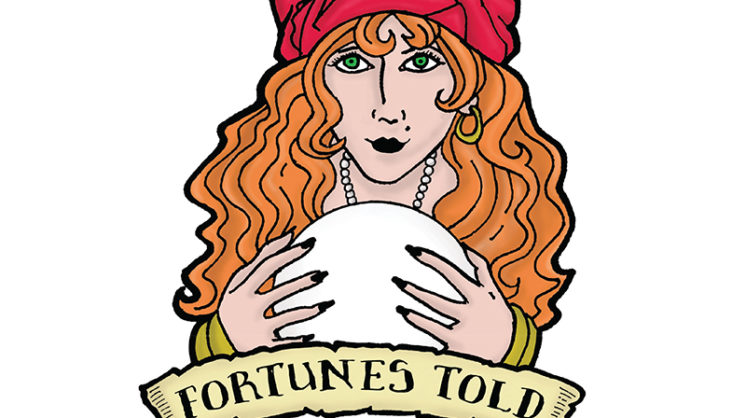 If there’s one thing I enjoy at the start of the new year, it’s building a roaring fire and kicking back with a good read – specifically, with a riveting list of coming attractions for the year in the form of psychic predictions. Whether they’re the devil’s playbook or life’s sometimes-legitimate warning label, they are, as predicted, supremely entertaining.

This month marks the 20th anniversary of the “crossing over” of one of the all-time greats among the dearly departed. Long before Nancy Reagan’s astrologers, the Psychic Friends Network, Miss Cleo or the Long Island Medium, there reigned Jeane “Queen of the Unseen” Dixon, whose syndicated annual predictions could often compel readers to take an alternate route to work – thanks in part to a few home run predictions she’d knocked out of the park, including accurately predicting the deaths of FDR, Joseph Stalin and JFK. (It’s reasonable to think Dixon’s name would be casually removed from the White House guest lists of Nixon and the Reagans; apparently, she remained a hit at parties.)

Although many still carry the stale whiff of Dionne Warwick, psychic websites abound on the Internet. The sheer volume of annual predictions makes it more difficult to separate the psychic wheat from the dabbling chaff, especially during years when drought, famine and pest infestation are predicted to spark a global disruption in the food supply and cripple the American farmer.

In my quest to find a reliable new steady amid the psychic fray for some 2017 predictions, I came across a psychic’s website that actually came with a warning (and really, shouldn’t they all come with a warning?) which read, Warning: do not read if negative visions of the future make you depressed or distressed. Of course, that’s good advice for anyone to heed, but it’s also the kind of titillating advisory that makes you lean in for a closer look, the same way you do when the newscaster says, “The graphic nature of what you’re about to see may be disturbing to some viewers.” To me, that’s code for, “Get in here and turn it up. You’re not going to believe this!”

Naturally, I leaned in for a closer look and discovered (spoiler alert!) that 2017 is the year we’re all doomed, according to the psychic bloggers who contribute to the site. Knowing there’s a possibility of depressing or distressing readers with these negative visions, I’ll extend the same warning for these carefully curated, month-by-month predictions. If you’re reading this online, print out a copy to tuck away in the [predicted] event that you find yourself running to outpace the flow of hot lava behind you.

I’ve already done some of the presorting, editing out scads of unspecific, broad-brushstroke predictions that have all the substance of cotton candy to information-starved readers (i.e., “sometimes the market will be up and sometimes it will be down,” “a beloved celebrity will die,” or “some countries will experience droughts while others experience floods.” Riveting!) Here are the year’s hotspots:

January: Politician in handcuffs after being arrested (and just in time for February sweeps!)

February: Texas secedes from the U.S. (more pressing issue: does the groundhog see his shadow?)

March: All hell breaks loose in the U.S. (this can only mean someone important will get kicked off “The Voice”)

April: Congress in shambles (bigger concern: what time will it be in Phoenix when Daylight Savings begins?)

May: A direct quote: “World Stops” (the preppers were right!)

July: Laurel and Hardy in the news (this sounds like a stunt to improve the national mood)

August: Crabs in the news (use the cream, people!)

September: Secret meetings at Camp David (not a secret anymore)

As the curator of the list, I’ll be keeping a copy to check off any events that actually come to pass (except during the month of May, when the world will stop). You, on the other hand, should throw this list out and make it a happy and wonderful 2017. Cheers!