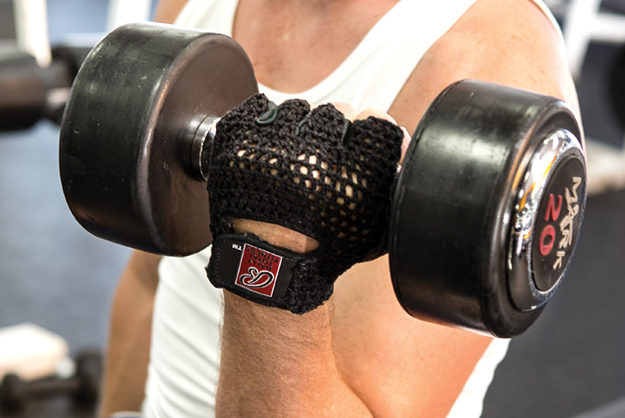 The shorts have been pushed to the back of the closet, and where the trunks landed after that final August swim is anybody’s guess. Flip flops? They’re gone until spring, along with the fading tan line.

But just when I am ready to grab that box of Cheez-Its and start a six-month binge on comfort foods, I remember how hard it was looking in the mirror last spring. “No more taking the winter off,” I promise myself.

I used to be one of those gym rats who complained about all the “New Year Resolutionists” –  the ones who make that commitment to work out only after consuming a bottle of bubbly on New Year’s Eve. They swarm the gym and hog the equipment on January 2 until they get bored in February.

Last year, however, I became one of those “resolutionists.” But after seeing what six months of Cheez-Its will do to the abs, I am determined not to do it again.

“Exercising has always been very important to me,” said Sherri McCurdy, owner of No Regrets stationery and gift store in Casady Square. “Physical fitness and nutrition are vital to good health, so I always try to exercise and eat well-balanced meals.”

McCurdy says family responsibilities and running a business sometimes make it hard to fit everything into the day, including finding time for the gym.

“On the days when I can’t make it in for a workout, I will still do some exercises on my own at home, either stretching, power-walking or I may just pop in a fitness video,” McCurdy said.

“Pilates is my favorite activity. I do that once a week, and I also mix it up with some weight training. I try to work out at least three times a week, but sometimes that just doesn’t happen.

“I usually never take a break from working out. A friend once told me it takes months to get toned, but only two weeks to lose everything you worked for. I know it’s tempting to want to skip the gym, especially in the colder months. But even if I can make myself go for 15 minutes I always feel better,” she added.

So how can we force ourselves out of the house and into the gym on even the coldest, grayest winter days?

“We all want to look good in a bikini or swim trunks,” said Kevin McBride, owner of Four Star Fitness. “Some people have the luxury of everlasting youth and never pack on that extra weight. But for those of us who are not so lucky, we need to be working out in the wintertime because it just doesn’t happen overnight.”

Exercising and fitness is all about moderation, he says, and setting realistic goals for yourself.

“Ideally we are after a healthy lifestyle to promote longevity and feeling better. It’s not just about looking good at the beach or the pool, although that is a definite bonus,” McBride said.

“We want people’s goal to be a healthier lifestyle, which is a year-round commitment. I’m also more of an advocate of a healthy balance, too. If you’re having a day that you absolutely don’t want to go to the gym, then take a day off and regroup. The gym will be there tomorrow. You just have to know that if you take that day off, then you absolutely will have to go the next day – no excuses.”

For the beginner, or even for the fellow who has taken a few months off to sit home and eat Cheez-Its, looking around at the muscled bodies can be a little intimidating.

“The muscular person you think is judging you is most likely saying to himself that it’s good to see you working on your health,” McBride said. “If it’s a good gym, then it’s full of supportive people. Once you get past your fears and stick with it, you will see you’re just like everyone else in there; the only difference is they just started before you.”

Not so long ago, Oklahoma City made headlines for being one of the top states for people with the worst health. Obesity was a leading cause. Today, fitness centers and retail shops are helping get people off the sofa and into an exercise regimen.

“We are all about fitness,” said Jon Beck, owner with his wife Burke of Red Coyote Running and Fitness in Classen Curve. “For us it’s not just about getting shoes on people’s feet. We have a number of programs we put together for people who need an incentive to get healthy.”

Red Coyote’s “Newbie 5K” is a 10-week program that trains people for their first 5K/3.1 mile distance run. “There is a little work involved,” Beck said “but you’re absolutely at the same beginner level as everyone else.

“We have a free ‘Fun Run’ each Thursday evening, and we cap off the night off with an adult beverage or two. It’s a lot of fun, and a great way to socialize and exercise. Our main reason for opening the store, however, was to give top-notch customer service. The majority of our customers are new to fitness, and we want them to feel comfortable coming into our store and not be intimidated. Burke and I like to think we are helping Oklahoma City become a more fit community,” Beck said.

As fall kicks into high gear, running and fitness often take a backseat to those rich, tempting foods that come with the holidays. Certified personal trainer Jeremy Minihan believes we don’t have to deprive ourselves – just use a little common sense.

“The average person will gain about five pounds between Thanksgiving and New Year’s,” Minihan said. “This is generally because once they begin eating these treats, they also stop their normal exercise routines. It’s important, if you don’t want to be a statistic, that you maintain your workout and healthy eating routine, and allow yourself to indulge only twice a week. You can still enjoy the holiday festivities, but do it in moderation.”

And keeping up a winter exercise regimen is crucial for a number of reasons, he says.

“Because your exercise options are now more limited to indoor activities, you must make gym time a staple in your daily agenda. We are creatures of habit who mostly operate on ‘autopilot,’ so it is important we stay aware of the habits we are forming. If you don’t allow yourself to get out of the habit of going to the gym, your New Year’s resolution is suddenly less intimidating.”

Minihan says once you put on a fat cell, that sucker is there to stay. “Sure, you can shrink it but it never goes away entirely. That’s why it’s so easy to put weight back on once you have worked so hard to take it off.

“It may be tough getting out of the house when the weather is cold,” he says, “but one thing is for sure: You’re always glad you went and you will feel great once you’re finished. At the end of the day if your heart is in the right place and you want to make changes but don’t quite know how – simply ask for help. It’s out there waiting on you. Just keep in mind summer bodies are made in the winter.”