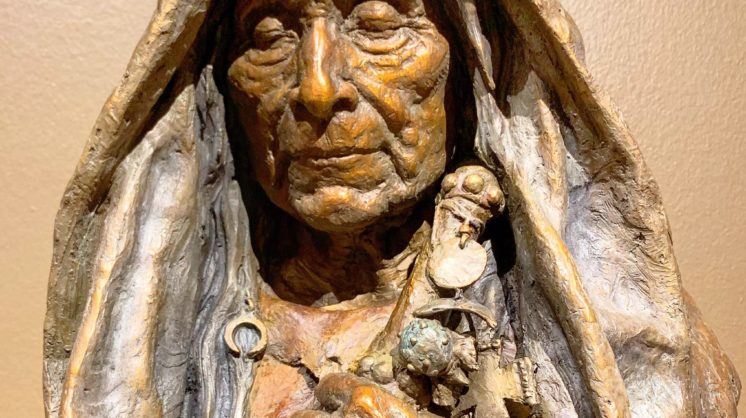 The Prix de West Invitational Art Exhibition and Sale at the National Cowboy and Western Heritage Museum generated nearly $3 million in sales during its opening week this June. A portion of the proceeds from the sale funds the museum’s exhibitions and family programming – but as much as its primary function is as a sale, the Prix de West is also one of the premier exhibitions in the world, especially in terms of Western art.

“We think most people assume it’s simply an art auction,” says NWCHM Curator of Special Exhibits Susan Patterson. “But the art remains here on site until August 4, and it’s a rare chance for the public to see some of the best Western art available.”

This year, 98 artists displayed their work in the show, and 96 of those artists’ works are on display at the museum. Based on the show, it’s clear that Western art continues to evolve as an art form, and in doing so, it’s not just functioning as a means of honoring an old cowboy lifestyle; it’s picking up voices along the way, all of whom have a unique story to tell about the American West.

“What we do at Prix de West is tell the story of the American West,” Patterson says, “both historically and [about] the contemporary West, and since we had 98 artists this year, we had 98 different stories, and many ways to tell them.”

The winner of the 2018 Prix de West Purchase Award was Chinese-American artist Mian Situ’s piece “Blasting a Route through the Sierra Nevada Mountains, 1865, Central Pacific Railroad.” (The Purchase Award is a piece that is purchased for the museum’s permanent collection.) Situ often uses his art to tell the stories of how Chinese immigrants helped to build the West, especially the transcontinental railroad. Patterson calls his perspective “one that adds much needed diversity” to the genre.

In fact, the museum curatorial team is in the middle of long-term discussions and planning about how to be more inclusive. In a genre long dominated by white and Hispanic men, strong Native American voices, women’s voices and Asian-American voices are emerging. In fact, this year’s Purchase Award went to a bronze sculpture titled “The Procession” from Oklahoma native and Muscogee Nation citizen Paul Moore.

Moore is an accomplished artist – he also won this year’s Robert Lougheed Memorial Award, which is selected by fellow artists – whose work is helping move sculpture forward as a medium. For “The Procession,” he worked with a technique he’s created to add color to the composition.

“When you subject acrylics to heat, they blister, so I needed a way to color the bronze without the blistering,” Moore says. “I watered the paints down over and over and experimented with them until I reached a solution of water to paint that didn’t blister. It was thin enough that it took five or six coats of the blue before you could see it start to stain the bronze.”

The effect is beautifully luminous, and combined with the relief sculpture, helps to add depth and mood to a piece that is more visually complex, drawing the viewer’s eyes to more details than just a central frame or vanishing point. Moore said he believes he’s the first to use the technique, and it’s certain that his is the only work in this show that utilizes it.

The exhibit continues through Aug. 4 at the museum, located at 1700 NE 63rd in OKC, and unsold works are still available for purchase.