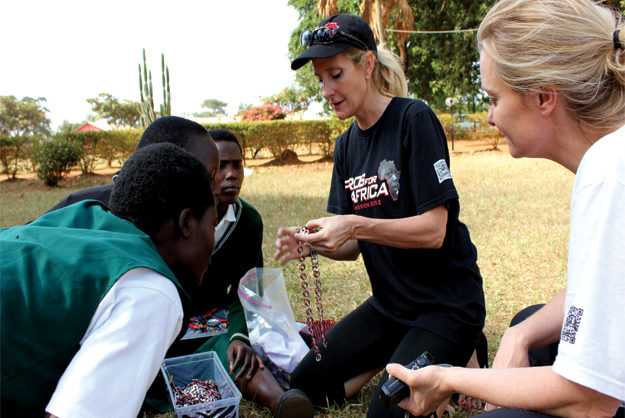 In 2002, Reggie Whitten found himself in the depths of despair after his son Brandon passed away. A friend took him to Africa for some soul searching, and it was there – in Gulu, Uganda – that he met Sister Rosemary Nyirumbe, director of the St. Monica’s Girls’ Tailoring Center.

Sister Rosemary openly defied Joseph Kony and the Lord’s Resistance Army during their 20-year reign of terror. She has enrolled over 2,000 girls in her school – young women who were previously abducted by the LRA or abandoned by their families – teaching them the skills necessary to be self-reliant. The girls make their own clothes, grow their own food and learn a trade while becoming agents of change for peace and prosperity.

When Reggie returned home, he and wife Rachelle began a journey to help Sister Rosemary.

“It was during my trip to Uganda and seeing these amazing women and children that inspired me,” says Rachelle. “On a trip to Oklahoma, Sister Rosemary showed me a pop-tab bracelet and a small coin purse she had received as a gift. I looked closely and thought, ‘Wow, we could do this!’”

After much research of pop tabs, thread and design, Sisters United was born. “We began smuggling suitcases of pop tabs and threads into Uganda and our mission took off,” Rachelle says. “The women of Uganda do not want a handout, they want work. Through the purse project, these women are able to earn their own living, buy food and provide their children with basic needs. They are able to restore their dignity and are seeing hope for a better future.”

To purchase these ultra-cool bags, or for more information on ways you can aid the effort, visit sistersunited.com.