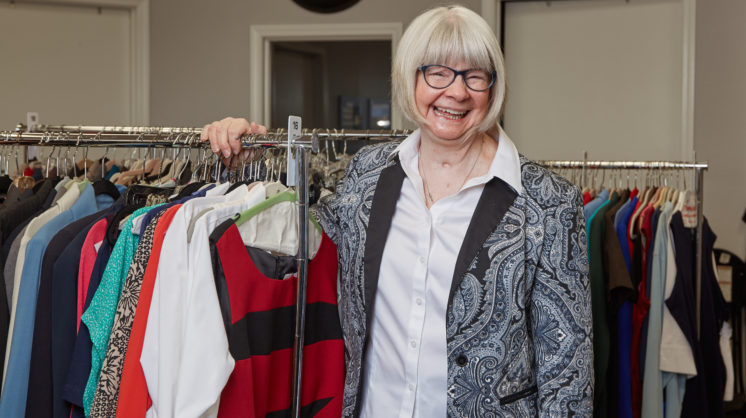 Susan Walton, founder of Suited for Success in Oklahoma City, was preoccupied with two things on the morning of April 19, 1995. She had a finger-spelling test to study for, and she needed to deposit money in her husband’s CPA account to cover the company’s taxes.

Finger spelling was one of the courses Walton was required to take at OSU-OKC in its American Sign Language curriculum. She hadn’t known how hard learning sign language would be … but she would later learn just how valuable it could be.

“It was a beautiful spring morning, and I was zipping right along on the crosstown,” Walton recalls of that April day. “And that’s kind of where my memory ends for a little bit.”

She was inside the credit union at 9:03 a.m. when the Federal building was blown apart. Walton was found pinned underneath a file cabinet and door frame. She’d suffered a basal skull fracture, had nerve damage behind both eyes, lost six teeth and had her jaw fractured in six places, her nose broken and both legs crushed from the knees down. Later, her spleen ruptured.

“I was a mess,” she jokes, 25 years later. Taken to what was then Presbyterian Hospital, she was heavily sedated, but was finger spelling her name and her mother’s phone number repeatedly. An astute staff member recognized that she was signing and not flailing, and her identity was upgraded from “Jane Doe.”

During the next five days, Walton endured about 15 surgeries to repair her legs, skull and jaw. When she became more aware and awake – albeit still in a cloud of anesthesia with her jaw wired shut – she learned what had happened to her body and to her city, though she didn’t remember any of it.

Throughout her recovery and rehabilitation, Walton had been holding onto a dream. Before April 19 and her second marriage, she been a single mom, on a tight budget but blessed with family support and a good job. She knew how expensive professional clothes were. Inspired by The Bottomless Closet, a nonprofit in Chicago that helped women get jobs by providing them with professional clothing, Walton wanted something similar in central Oklahoma.

Throughout her fight recovering from massive injuries, Walton was overwhelmed by the outpouring of compassion and assistance she received from public, nonprofit and civic groups.

She was determined to give back to the community that had embraced her by creating Suited for Success. She officially began collecting donated women’s suits in 1997 and today, the nonprofit has outfitted more than 10,000 women in central Oklahoma, helping them enter or re-enter the workforce, dressed to impress.

“There is definitely more I want to do,” Walton says. “I know the importance of clothing and how that first impression is so important.”

She wants the organization to also serve men. While the agency’s current location, at 4557 NW 23rd, also houses its 1st Impression Resale Clothier, it lacks the space to carry menswear. Walton envisions expanding into the available space next door to start serving men in need of professional work clothing, as well.

She also dreams of an RV, retrofitted as a mobile closet, in which she could cruise to rural locations and offer her services to the men and women in areas typically underserved by nonprofit organizations. Don’t dismiss the possibility; Walton has a habit of overcoming adversity.