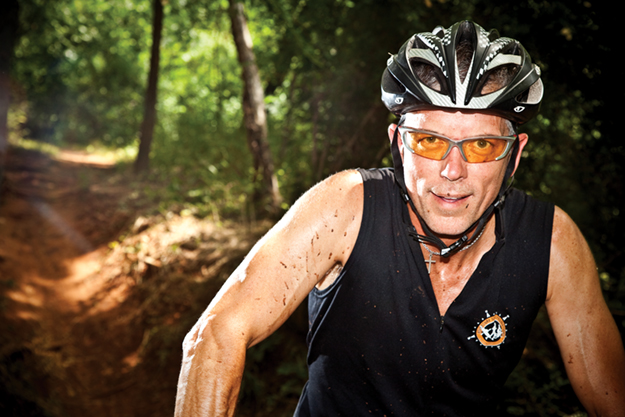 Robert Williams had already survived the worst of the 2001 Twelve Miles of Hell mountain biking race: The Kelvinator. It’s a section of side-by-side large granite boulders and multiple tricky drop-offs in Oklahoma’s Wichita Mountains – a jostling, proven bone-snapper. It’s where the race EMTs hang out.

Plunging in, Williams bounced and scraped his way through the Kelvinator – so named after old refrigerators’ tendency to shake and rattle in their compressors’ last gasps. When he emerged from what’s been called the most brutal ride this side of the Rockies, he felt ecstatic.

Ten glorious minutes later, though, he let his patience run out. It took his luck with it.

Descending on a footpath-wide dirt trail, he found himself trapped behind two slowpokes. Opportunities to pass weren’t promising, but he didn’t want to go this slow. Williams tightened his handlebar grip. He shot forward to pass.

“That’s when my front wheel dropped into a ravine and launched me off the front,” he said.

He slammed head-first, at 20 mph, into a rock. The granite crunched his top four front teeth. A couple still dangled in his mouth. After a brief daze caused by a mild concussion, and spitting blood, he grappled his bike. He scrambled up the ravine, threw his leg over the seat and hit the trail again. He finished the race with a red badge of courage circling his mouth and missing pieces of three teeth that bleach in the sun on the trail to this day.

His misfortune and tenacity earned him the annual “Big Bawls” award, given to the most severely damaged athlete in the race. You might call Robert “Crash” Williams an extreme athlete. You might also call him a little crazy.

Williams, 51, grew up in OKC a few miles from Lake Hefner. He graduated from John Marshall in 1979. He wasn’t a jock. His parents, though, especially his mom, instilled in him the belief that there was nothing he couldn’t do or become.

He took it to heart. He ran a sailboat rental/training shop at Lake Hefner in his senior year and in his freshman days at UCO. That entrepreneurial spirit eventually led him to selling yachts in California for half a decade and launching handfuls of businesses throughout the years.

Williams has a successful salesman’s personality. He’s owned a car dealership, coffee shop and an insurance company. He’s outgoing, brimming with confidence, and his good looks and fitness instantly verify his first-impression bona fides. Those traits have served him well.

He’s now a commercial real estate sales associate with InterWest Realty. One phone call could be worth $20,000 or $40,000 in commissions on multi-million-dollar deals. Those calls could be ones he might have missed in his former endeavor – as owner of Adventure Sports Promotions.

From 2000 to 2004, he promoted and rounded up resources to stage around 70 adventure races in Oklahoma, Texas, Kansas, Missouri and Arkansas. Adventure races are akin to triathlons. But instead of road bikes, racers use off-road bikes. Running is done on trails rather than roads. Instead of swimming, competitors paddle in a canoe or kayak. Williams’ role was to fill up a huge trailer with life jackets, kayaks, paddles, etc., and head to race sites to set up the course.

Adventure racing, however, has twists. Super-athletes may be the fastest, but can they communicate well enough to guide one another blindly through a “minefield” of objects that force them to start again if they hit one? One of Williams’ favorites was letting the air out of the competitors’ bike tires: The serious, experienced riders would typically start replacing their tubes. Others would figure out that everyone had flat tires and start pumping.

Williams crashed into the adrenaline life basically out of the blue when he was 38. A friend, Danny Albert, showed up at his work with the spandex and bright-color uniform of a cyclist. He challenged Williams to ride the biking trails at Lake Stanley Draper.

“That one event literally changed my life,” he said. “I didn’t run, or bike, or anything. Obviously I had that in me, but I just never experienced it. Once I did, I just absolutely got hooked.”

Within a week, he exchanged his rudimentary-level mountain bike for a model that cost about $1,000. Four months later, he was pumping pedals in his first 24-hour bike race. “I went from smoking cigars and drinking every night to hardly drinking at all.”

He still lives that way today. He’s competed in more than 100 races with names like the “Hell and Back 440 (miles),” the Vail Ultra 100 and the Flint Hills Death Ride. He’s not limited to cycling. He has ridden a bull, bungee jumped, skydived, learned advanced scuba diving and hang glided.

He’s not finished. His to-do list includes qualifying as a parachute BASE jumper: leaping off a Building, Antenna, Span and Earth form. “The antenna (held up by rigid wire cables) scares heck out of me,” he said. He’s also aiming for shark diving without a cage, summiting a 14,000-foot frigid mountain and riding a bike coast-to-coast.

So what makes Robert Williams march to the beat of an out-there drum? It’s not necessarily inspiration from his own accomplishments. When he engineered adventure races, the top-notch, disciplined competitors didn’t leave a lasting mark. He doesn’t have any sports heroes. He fondly recalls a mother and daughter, though, who wrote him and said they were 40 pounds overweight and determined to finish his race in Kansas City. They finished dead last, and in danger of no one ever noticing.

“We’re taking the tents down and they’re coming across the finish line,” Williams said. “People there were cheering them on. It was just so great to see people figure out that there is nothing you can’t do. They felt like they were coming in first place.”

Like his parents before him, he’s passing on the legacy of unlimited horizons. He’s the father of a 19-year-old daughter who excelled in competitive cheerleading. His 6-year-old daughter was introduced to competing in adventure sports at an early age.

“I’m trying to instill that belief in her because the greatest joy I got from putting on the adventure races was not the rabbits who always took first, second or third, it was the out-of-shape, middle-aged mom and daughter who came in dead last.”