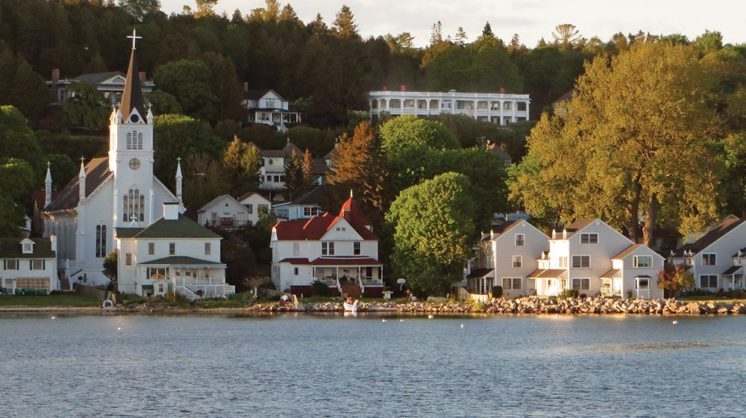 Mackinac Island is a small oasis in the blending waters of Lake Michigan and Lake Huron – between the mainland of Michigan and its Upper Peninsula. The island offers a spot of respite in a world that seems increasingly chaotic. It’s a place where Christopher Reeve’s spirit still lives … and the 21st century doesn’t.

The British built a fort here in 1780, and following the War of 1812, the island became a center of the American Fur Trading Company, founded by John Jacob Astor. Later in the century, a steamship company plus two railroad companies decided to build massive accommodations. They began in the dead of winter in hopes of being complete in time for summer tourists; with hundreds of laborers and 1.5 million feet of lumber, the work was completed in 90 days. The hotel opened on July 10, 1887.

Grand Hotel became the place for wealthy families from Detroit, Milwaukee and Chicago. The era was characterized by a desire to revel in economic success, so many built huge “cottages” on the island; many more made annual pilgrimages to Grand Hotel. Many descendents of these early visitors are still making this pilgrimage – and so can you.

Grand Hotel may be elegant, but it’s definitely not stuffy; she wears her 130 years well. Her pristine, columned exterior proclaims dignity, but her saucy side shows with yellow and white striped awnings and brilliant red geraniums. One family has owned the hotel for 85 years – four generations. In 1977, designer Carlton Varney brought a color palette to the staid lady that has become a hallmark of the hotel. Public areas now feature a brilliant blend of bright hues and extraordinary accessories.

Nothing is “standard” at Grand Hotel. Accommodations range from guest rooms through suites up to a luxurious cottage, and each of the 393 rooms is individually decorated. Just walking into my room made me smile; it was like walking into a lush garden. Three walls featured wildly colored wallpaper, the fourth, a luscious pink, and white furniture sported the signature red geraniums. The Rosalynn Carter Suite is pink perfection, while the Lodge of Teddy Roosevelt sports trophy heads – naturally – and a masculine air.

The public rooms are equally delightful. The dining room, which seats 1,000, bustles with white-coated, bow-tied servers and senior staff in sedate black tuxes. One wall of windows overlooks the lawns and lake. Mirrors multiply the formally set tables and, at dinner, a small ensemble serenades guests. Check the hotel’s dress code before you pack.

The gardens and grounds of the hotel are not only beautifully landscaped, but sites for bocce and croquet, as well. The Esther Williams Pool (she made a film here in the ’40s), sauna and hot tub attract swimmers and sunbathers. A small, wooded labyrinth offers quiet meditation, while golf, tennis, pickleball and bikes provide other options for more active guests. Boat cruises, walking tours, kayaking, fishing, parasailing and paddleboarding are available. 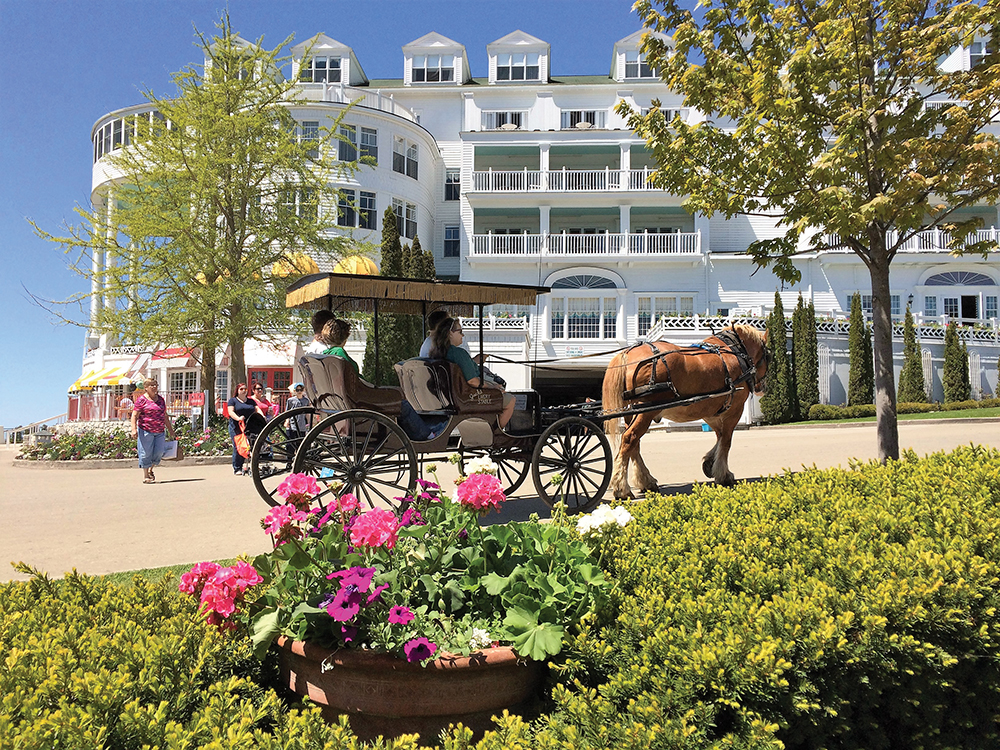 My Kingdom for a Horse

There’s usually a fresh breeze off the Straits of Mackinac; it frequently carries an essentially earthly aroma. There are no cars on the island, so no exhaust fumes, but the main source of transportation offers its own distinct scent: at the peak of the season, there are approximately 600 horses on the island. Horse power pulls carriages taking guests from place to place, and wagons used for moving luggage, supplies and packages. Riding horses, bicycles and feet will get you around, too. There are emergency vehicles on the island – but I’ve never seen one.

Ferries take visitors to the island from Mackinaw City to the south or St. Ignace in the Upper Peninsula. I’ve used Shepler’s for all three of my visits, and they have the whole process down pat: Leave your car and check your luggage on the mainland, and board the boat – it only takes 16 minutes to travel back 100 years.

Tourism is the No. 1 industry on the island, with the season lasting from May into October. While Grand Hotel is the premier accommodation, there are plenty of other choices. B&Bs and small hotels predominate – there are no chains.

Shopping is a major activity, ranging from souvenirs to fine art. The island’s most popular purchase is fudge – so much so, that day-trippers are referred to as “fudgies.” The historic Fort Mackinac is a must-see. Costumed interpreters add to the ambiance and do rifle and cannon firing demonstrations regularly. With advance reservations and a fee, you might even get to fire the first cannon of the day before the fort opens to the public.

Most of the island is state park land, with several of trails for hiking or biking. Many bikers take the outer road circling the island – an eight-mile trip past grand lake-front homes, pristine forests, iconic Arch Rock and a small monument marking the location of a pivotal scene in Grand’s accidental advertisement, the film Somewhere in Time. Starring Christopher Reeve and Jane Seymour, it introduced the island to a wide audience. Movie buffs from all over the world are drawn here because of it, and they return because the reality is so much more than the fantasy. The last weekend of each season, guests dress in period costumes, closing each year with a tribute to their favorite film and its Grand location.