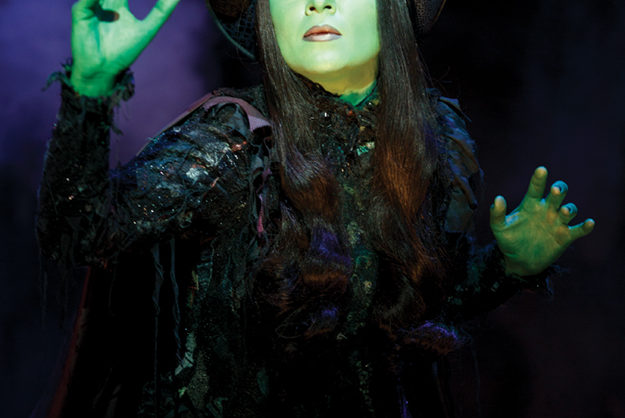 September 4-22, OKC Civic Center
It may be a great color for singing frogs, but when a woman has green skin and magical powers suddenly nobody trusts her. Long before a certain Kansan visits the land of Oz, friendships are forged and tested, sensational songs are sung and the lines between heroism and villainy get a bit blurry as Celebrity Attractions presents the magical musical that is “Wicked.”

September 6, OKC Golf & Country Club
By all rights, the suggested dress for the Oklahoma City Museum of Art’s 38th annual Renaissance Ball should be not black tie, but white robes and halos. That’s because the elegant gala’s theme is “Heaven on Earth,” inspired by the museum’s current exhibit featuring half a millennium of majestic Italian paintings, and its aim is to give guests an evening’s slice of paradise.

September 6-28, Paseo Art Space
One click of a shutter – a tiny fraction of a second – can tell an entire story or leave an impression on viewers that lasts for decades. Photography is heady stuff, and this is among the very best in Oklahoma: veteran camera-wielder Carl Shortt selects the cream of the f-stop in the Paseo Arts Association’s annual PhotoFest.

September 9-October 19, Firehouse Art Center
The ground beneath our feet may hold limitless artistic potential; the fine art pieces found in the Firehouse’s new exhibit “CLAY” are each composed of at least 75 percent of that namesake material. Juror Stuart Asprey has the difficult task of selecting the prizewinners in this national show, but gallery guests effortlessly reap the aesthetic rewards.

Back in the Saddle

September 14, Boone Pickens Stadium
Going 8-5 with narrow losses to Texas, Baylor and (most heartbreaking of all) OU wasn’t the dream season the Cowboys had in mind … but that was last year. The Big 12’s preseason No. 1 pick will have two games in the books by the time they play in Stillwater; hometown crowds will get their first close look at stars like WR Josh Stewart when OSU faces down Lamar.

Just for the Yell of It

September 27, Rose State PAC
In a perfect world, Lewis Black would be a calm, friendly, jovial chap … but ours is not a perfect world, and that has a tendency to send Black into raging verbal paroxysms. On the plus side, since they tend to be thoughtful, incisively observant critiques of societal stupidity, it works out nicely for everyone – especially audiences of his new tour, “The Rant Is Due.”

September 19, Riverwind Casino
While Chris Daughtry didn’t win “American Idol” – he placed 4th in season 5 – he had enough faith in himself to start his own band. Three albums and nearly 7 million copies later, that decision is sounding better all the time. Riverwind is on Daughtry’s nonstop tour schedule, and fans may get a taste of their upcoming release.

September 20-29, OU Rupel Jones Theater
Members of OU’s resident ballet company put their best feet forward – and sideways, and surprisingly high into the air – in a suite of sublime dance performance: two French-inspired pieces choreographed by School of Dance Director Mary Margaret Holt, classics from “Lakme” and “Sylvia” and a daring premiere set to a Vivaldi score. Welcome to the enchantment of the Oklahoma Festival Ballet.

September 20, 50 Penn Place
At the Oklahoma Visual Arts Coalition’s 12 x 12 art show and sale, great things truly do come in small packages, courtesy of 150 of the state’s great artists – each of whom has submitted a tiny treasure no larger than a square foot. It’s a prime opportunity to mingle and purchase, and beautiful proof that bigger isn’t always better.

September 28, Downtown Edmond
The best way to absorb a foreign culture is to immerse yourself in it; this is a prime opportunity to apply the same principle to art. In the 3rd annual Downtown Edmond Art Crawl, the city center teems with creativity from the ground up: painters, sculptors, musicians and vibrant decorations are everywhere, and participating merchants offer wine, refreshments, specials and prizes. Share and enjoy!