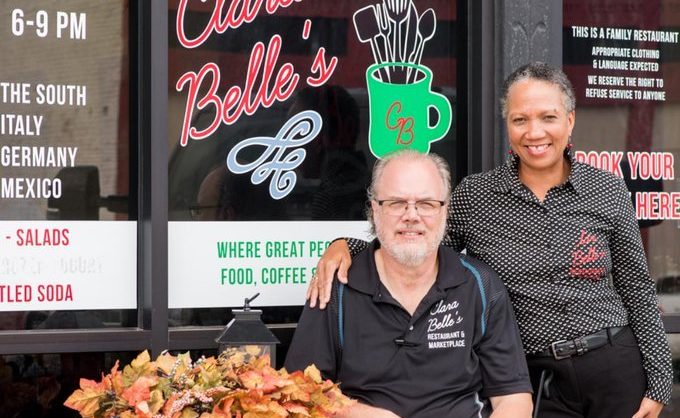 Clara Belle’s Restaurant is Nestled between a dental office and the old city hall in McLoud. If you didn’t know it was there, you might not notice it.

The restaurant may be small, but that doesn’t stop owners Wayne and Donna Heins from doing big things — especially for the homeless community in Oklahoma City.

Long before the COVID-19 pandemic, the Heins’ were ministering to the homeless, bringing hot meals prepared in the Clara Belle’s kitchen and donating clothing to Oklahoma City shelters.

When the virus hit, things changed.

One facility that received meal donations from the couple is all but shuttered due to funding and COVID-19 concerns. Where it once offered breakfast and lunch along with other basic needs, it now only offers one meal a day, externally, at a lesser volume, Wayne Heins said.

“With all this pandemic stuff going on in Oklahoma City, the day shelter at Third and Virginia has basically closed its doors,” Wayne said.

So, the couple has ramped up their efforts to supply bagged meals that don’t require refrigeration for distribution.

“We’re trying to pick up the slack,” Wayne said. “We now do peanut butter and jelly sacks four days a week.”

Being in the restaurant industry the Heins’ are suffering too, seeing less than 20 percent of their normal sales on an average day. But their many acts of compassion came full circle recently when several volunteer groups purchased a large order of lunches from Clara Belle’s for the staff at Mabel Bassett Correctional Center, an unexpected sale that helped the Heins’ immensely.

“Based on volume, we made enough money to pay about half of our bills at the restaurant,” Wayne said. “That’s enough to help us live another day and know that we can go another month.”

Hunger and basic needs continue to plague the city’s most vulnerable, despite the current pandemic.

The Heins’ say they will continue to do what they can. As Wayne tells it, choosing not to help is simply not in his or Donna’s DNA.

“To most people, homeless people are invisible,” Wayne said. “When you know these people and you’ve known them for a period of time, when we go downtown and we pray with these folks, we tell them that they are our friends and our family and that’s the way we look at it. They’re not invisible to us.”

1 NOUN Hotel’s Supper Club Brings Bison and Simple Splendor to Norman
2 Chill Out By Your Outdoor Fire
3 10 Things to Do in OKC This Weekend: September 21-25
4 The Art of Styling Your Home
5 10 Southwest Side Restaurants You Need to Try Now
6 What’s New This Fall for Visual Arts in OKC?