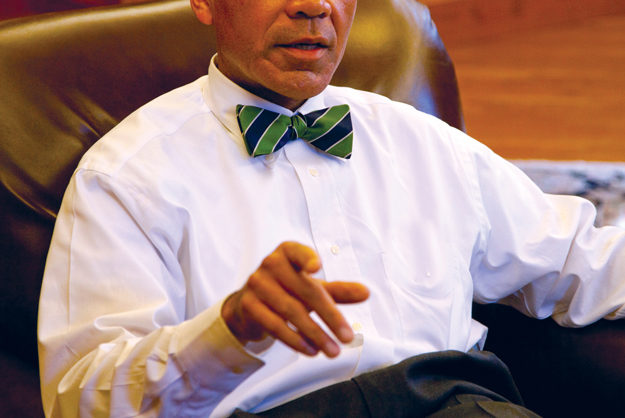 Anyone who knows The Honorable Jerome Holmes knows that he’s an Oklahoma treasure, even though he grew up abroad and in Washington, D.C. As the first African-American to serve on the U.S. Court of Appeals for the Tenth Circuit (he was appointed by President George W. Bush), Holmes has distinguished himself as an American treasure as well. He was groomed for his profession at Wake Forest University, Georgetown University Law Center and Harvard University’s John F. Kennedy School of Government.

Holmes was delightfully candid about the other daily “education” he currently gets from a pair of very laid-back canines: It’s OK for even the most intensely driven public servants to kick back occasionally and contemplate the things that make them grateful.  For Holmes, it’s having had the opportunity to do everything he’s ever dreamed of.

What’s your hometown? My dad worked for the State Department, so we lived in Korea, South Korea and Ethiopia before living in Washington, D.C., where I grew up.

When did you come to Oklahoma?  I came in 1988 as a law clerk. I went back to D.C. for a few years until another work opportunity came up here. Returning to Oklahoma is one of the best decisions I’ve ever made. I’m passionate about being a modern-day Sooner.

What’s the best part of your job?  Knowing that it allows me to do something important for the nation.

What are you currently learning how to do? The government was one of the last holdouts with WordPerfect, so very reluctantly, I’m trying to get better at Word. I’ve slowly accepted my fate, but I just loved “reveal codes.”

Is there anything else you regret doing away with?  I like simplicity. I de-clutter without regrets.  I think I have a super-Type-A instinct to be in control.

You’re a Scorpio, right? That control thing is a Scorpio trait.

What are your best traits?  I’m very disciplined, both physically and mentally. I’m a fighter.

Any guilty pleasure?  Popcorn. I love it. I’ve already had some this morning, in fact.

It’s only 10:30! I know. I smelled some down the hall and I just couldn’t say no. The best is Garrett’s Popcorn in Chicago. They have a website, but I’m almost afraid to check it out!

You’re very civically involved. Is there one nonprofit in particular that you love? The Oklahoma City Museum of Art is near and dear to my heart. I’m fortunate to be the chair-elect of a great organization that is a big part of Oklahoma City’s renaissance.

And they were never part of a MAPS project. That’s true.

Are you obsessed with anything, like a recent purchase? Not really. I don’t do gadgets, under the order of simplicity, but we all have to get iPhones in 2013, so I guess I’ll finally have to use an iPhone instead of a Blackberry.

Come on in, judge. The water’s fine…  I’m sure. It’s not that I’m anti-technology; I just don’t use it for fun.

Is there a moment in your career that was so significant, you’ll never forget it?  Walking out of the White House after my interview for this job. It went really well and I’ll never forget that feeling.

What should people try or experience at least once?  Leaving the country – it’s very broadening.

Are you a movie fan?  Very much so.  I love “The Graduate” and “The Departed.” And I love “It’s a Wonderful Life.” Part of me is a sap for the idea that one person can make a difference in the world.  I also love to see films at the Oklahoma City Museum of Art any time I can.

What are the best things your parents taught you?  Respect for authority.  They also modeled civility – something I believe is very important and very lacking in our culture.

What advice would you put inside a fortune cookie?  Stay true to yourself.  Don’t be someone who won’t take chances because of a fear of failure.

It defies logic that you’re unattached! You’re a total catch! Mm-hmmm. Yeah, yeah… but I am the proud owner of an English bulldog and a golden retriever mix. They think I’m OK.