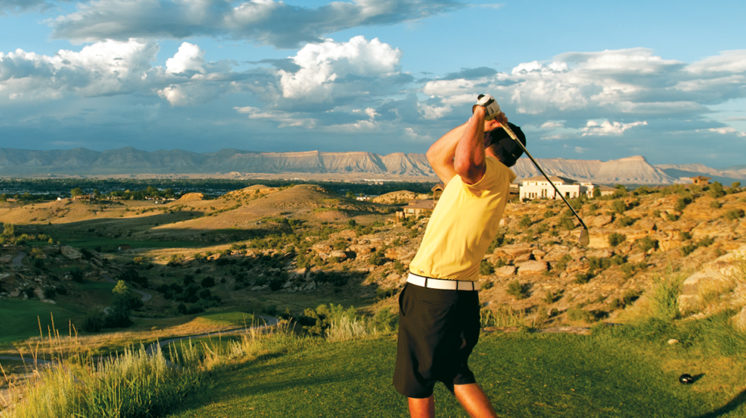 There is no shortage of places in the U.S. to play golf, if that’s all you want to do – but not all courses, or destinations, are created equal. If you’re taking a trip and looking for someplace special to show off your short game while making memories that will last a long time, these are some of our favorite courses that have a little something extra.

It is one thing to play a challenging round of golf in the high desert of Colorado, and it is another equally incredible experience to visit one of the most epic landscapes in the National Park service. In and around Grand Junction, Colorado, you can come pretty close to doing both. Western Colorado’s Grand Junction is in the oft-egregiously overlooked part of the state, and perhaps the definitive attraction to the area is the Colorado National Monument. This dramatic slice of high desert, covered in juniper and defined by dramatic geological structures such as The Monument and the Kissing Couple, is the backdrop for both Tiara Rado Golf Course and the other-worldly Golf Club at Redlands Mesa, designed by famed course architect Jim Engh.

Tiara Rado is a good warm-up for the more challenging Redlands Mesa. The front nine wanders manageably through a neighborhood, but the course really comes alive on the back nine. Beautiful fairways cut through the desert, with fast greens and elevated tees. The course’s premier hole is the 18th – also the highest, it includes a water feature near the green, making it as beautiful as it is challenging.

The Golf Club at Redlands Mesa is a whole different ball game. At nearly 7,000 yards from the championship tees, with wild banked fairways and more than 40 bunkers, as well as elevated tees on several par threes, it’s no wonder that this course has wound up on dozens of Golf Digest’s “Best of” lists, including Most Fun Course, as well as countless appearances as one of America’s Top 100 Courses. And let’s not forget, you’re having this masterpiece of a golf experience against the backdrop of towering reddish-pink sandstone of the Colorado National Monument. -Matt Payne 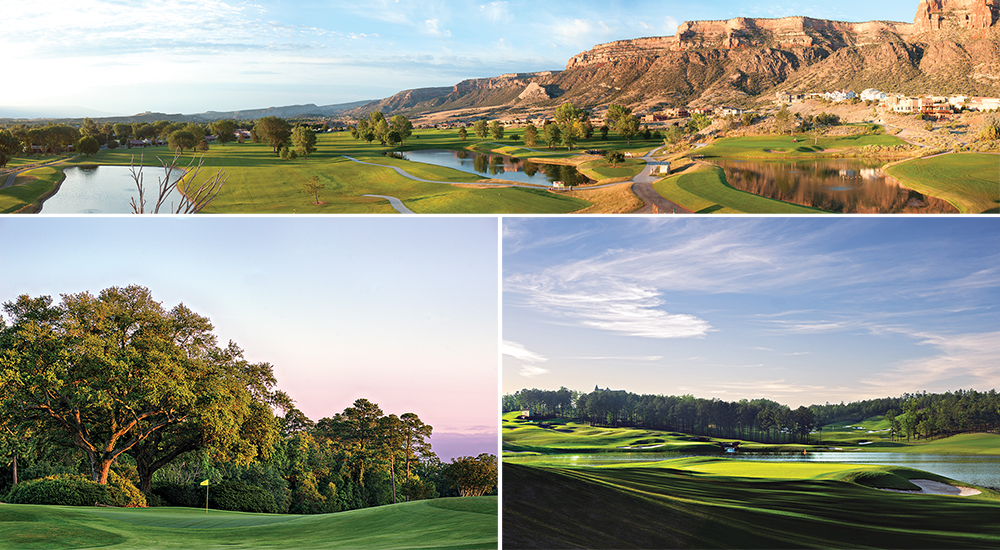 If you just can’t get enough golf, make tracks to the Robert Trent Jones Trail (rtjgolf.com) in Alabama. The Trail’s 11 locations are scattered from the Tennessee border and Appalachian foothills to southern marshes, wetlands and Mobile Bay. Hit them all and you could play 468 holes on the 26 courses. Golf Magazine has described the Trail as “the American golfer’s equivalent of Disney World.”

Course terrains vary from traditional Scottish-style links to dramatically sculpted fairways and greens. Variety is the spice of life, and the RTJ Trail provides it.

Grab your mashie for a Scots-styled challenge on the Senator course at Capitol Hill, whose layout is punctuated by more than 150 pothole bunkers. Bring plenty of water balls for the Lake course at Grand National, Auburn/Opelika, and prepare for a journey at Ross Bridge – one of the world’s longest courses at 8,191 yards of spectacular, rolling terrain.

For the ultimate in luxury, stay at the historic Grand Hotel Golf Resort and Spa in Point Clear on Mobile Bay. In addition to golf, enjoy tennis, water sports and a spa fit for a Roman emperor, and top it off with afternoon tea. This is the total package for families, and the two golf courses, Azalea and Dogwood, are among the lushest and most beautiful courses on the Trail.

It’s hard to pick a crown jewel among so many sparkling choices, but Ross Bridge Golf Resort and Spa near Birmingham is certainly a top contender. Golf Digest has named this destination one of their favorite golf resorts in both 2016 and 2017. The Renaissance Ross Bridge hotel looms over the landscape like a majestic, English country manor. The golf course stretches over a lot of territory with nine miles of cart paths along lakes and by a picture-worthy waterfall. Nearby Oxmoor courses add more interesting options to bring the total number of holes to 54.

Relax after a round with a spa treatment or a dip in either the indoor or outdoor saltwater pools, or just kick back with friends and enjoy the resident bagpiper saluting the sunset. -Elaine Warner 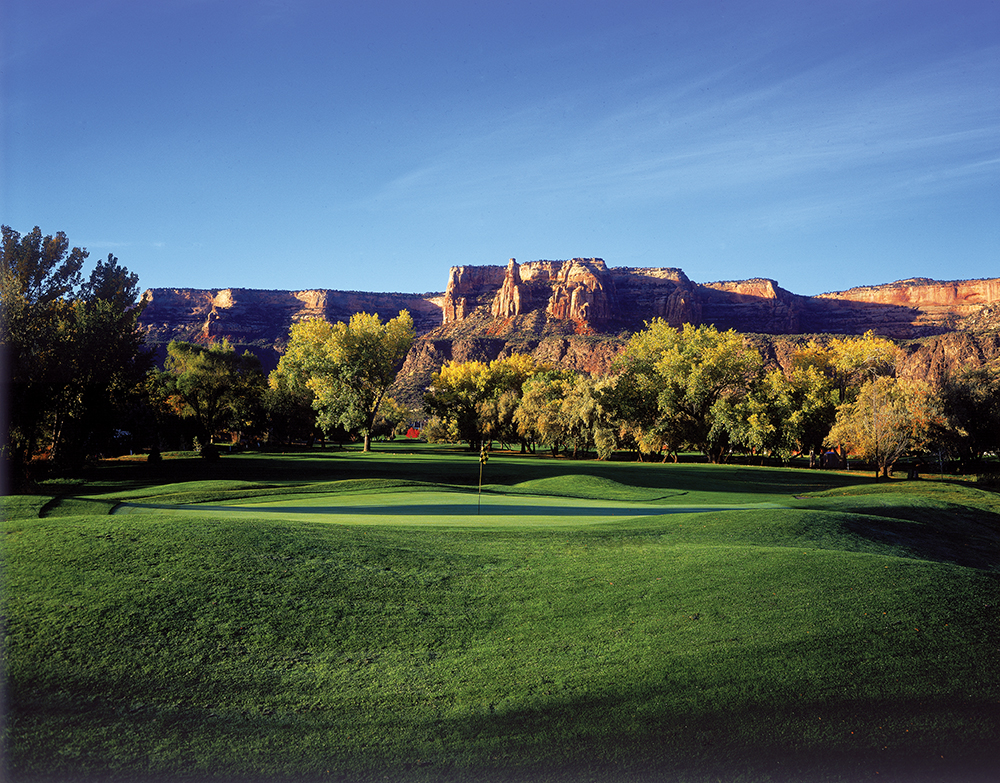 If you enjoy history with your golf, consider the 18-hole Charles L. Bowden Golf Course in Macon, Georgia. You won’t find it touted in Golf Digest or Golf Magazine, but its connection to the WPA and the Civil Rights movement, and its classic ’40s style, earned it a nomination to the National Register of Historic Places, a division of the National Park Service.

The 18-hole, 6,492-yard, par 72 course opened in 1940. Part of the land on which it was built had once been an airfield where Amelia Earhart landed. The course is fairly flat but liberally landscaped with mature trees. It was created in an era before large, earth-moving machines were in use – built with tractors, shovels and mules and the help of WPA workers.

From the beginning, blacks were only allowed on the course as caddies. Walter Worthen, one of those caddies, recalled that some of the players, when they were out of sight of the clubhouse, would allow their caddies to hit a few balls.

Worthen, along with other caddies and black golfers from the area, made several requests to the City Council to allow them to play. In 1961, after being put off for six years, four of the caddies took clubs and matters into their own hands and walked into the clubhouse, paid their greens fees, walked to the first tee and played the course, unchallenged. With that, Bowden became the first integrated public facility in Macon.

Today’s golfers, whether they realize it or not, are walking in historic footsteps. -EW 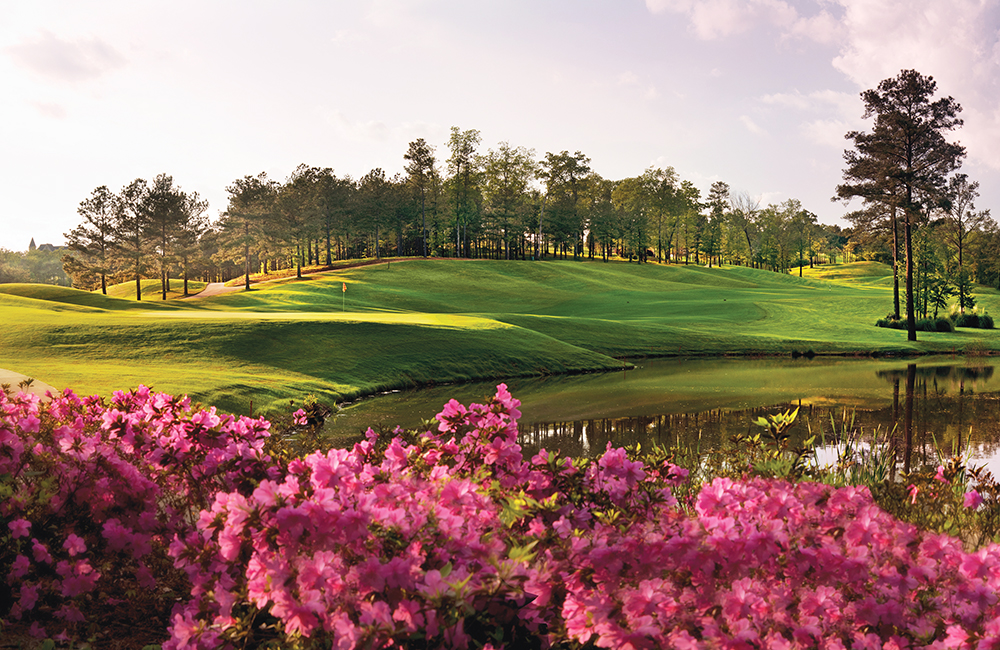 I was born to be a writer – I wield a mean pencil. An athlete? Not so much.

Back in the day, colleges required so many hours of physical education to graduate. I always looked for the easy out; I was good at walking, so I took golf. It was a good choice, although 90 percent of the course was in the classroom. I was a whiz at the rules and terminology, and came out with an A.

My folks took up golf in their late 60s. My dad was a fair golfer, and my mom was unconventional. She didn’t so much address the ball as dance to it. Her preparation resembled an enthusiastic football spike performance with lots of hip-waggling. Arms akimbo, she’d haul off and flail at the ball … and it would arc straight as an arrow to her target.

We usually played a flat-as-a-pancake public course in Enid. One day as she went through her motions, making an amazing chip shot onto the green, a disgusted golfer on the next tee yelled, “Lady, there’s no way you deserved that shot.”

My folks regularly skunked me. Completed rounds were accompanied by chuckles and the question, “What did you make in that course?”

Today, thanks to a tricky shoulder and two trigger fingers, my outings are limited to course tours with pros who proudly show me signature holes. We talk terrain, hazards and slope. I see lots of beautiful courses.

And I write about them. Just don’t hand me a golf club!