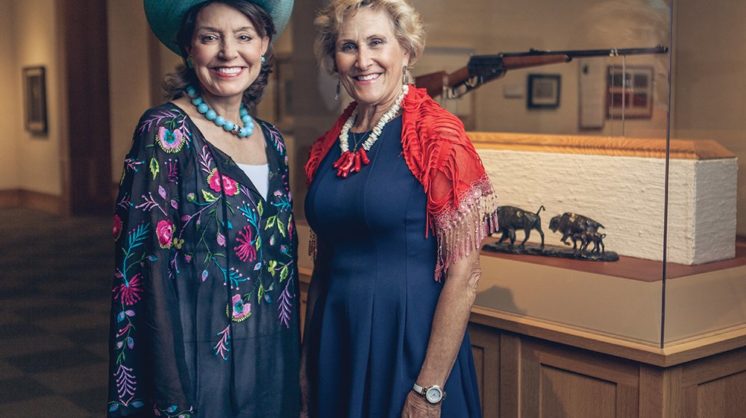 Our state has a rich, colorful and storied western heritage. Long before Rodgers and Hammerstein’s musical, Oklahoma was the setting for some of the most beautiful scenery on the plains. The cowboy lifestyle and legacy survives and thrives in vivid, living color at the National Cowboy and Western Heritage Museum. But for every cowboy wrangling a herd of cattle on the prairie, there was usually a woman nearby, as well.

For the past several years, the museum has celebrated the leadership roles women played in the state’s western heritage by establishing the Annie Oakley Society.

“Our mission is to build and sustain world-class educational experiences for children and families, to teach the rich history of the American West for generations to come,” says Cathy Keating, former Oklahoma First Lady and national chair for the Annie Oakley leadership team.

Oakley herself was an American sharpshooter and entertainer in the 19th and early 20th century who gained international celebrity.

“Her talent first came to light at age 15, when she won a shooting match with traveling show marksman Frank E. Butler, whom she later married,” Keating says. “Known as ‘Little Sure Shot,’ Annie Oakley was a remarkable and inspirational woman who trailblazed the way for generations of women to come.”

The Annie Oakley Society was formed seven years ago, Keating said. Since then, the group has gained more than 150 members throughout Oklahoma and the nation who support its vision and mission.

The annual Annie Oakley Society Luncheon also has grown to be their largest event and fundraiser, with all proceeds benefiting educational initiatives at the museum. An awards ceremony held during the luncheon has some celebrated names on its roster: “Past inductees include the Honorable Sandra Day O’Connor, Reba McEntire, Nadia Comaneci, Kristin Chenoweth, Admiral Michelle Howard and Donna Shirley,” Keating says. “Our members are invited to all events hosted for museum society members.”

“She is known as the ‘Queen of Suspense,’” Keating says. “Clark has sold more than 100 million copies in the United States alone. Additionally, each of her 51 books has been a best-seller in the U.S. and various European countries.”

Besides the induction ceremony, entertainment will be provided and the unique décor always lends a festive atmosphere, Keating said. And the money raised goes right back into the society’s educational campaign.

“Since our founding, we have raised nearly $4 million for a unique educational opportunity at the museum,” Keating says. “It is called ‘Liichokoshkomo,’ which in the Chickasaw language means ‘Let’s play!’ Also, this year we are introducing a market that will be open from 10 a.m. until 3 p.m. the day of the luncheon, and it is being sponsored by the ‘Little Sure Shots’ of the society. We are also introducing a special ticket price for the many fans of Mary Higgins Clark who will not want to miss this extraordinary opportunity to meet her, hear her speak and buy her latest best-seller for her to autograph.”

The luncheon is a high-energy, fun and memorable event, Keating said, and plans are underway to expand the society.

As the work continues, the legacy grows more illustrious for Oakley and the society that bears her trailblazing name.

The Annie Oakley Society Annual Luncheon takes place at 11:30 a.m. Sept. 14 in the Museum’s Sam Noble Special Events Center. Tickets are $100, and reservations are requested in advance at nationalcowboymuseum.org/attend-an-event/annie-oakley-society-luncheon/.