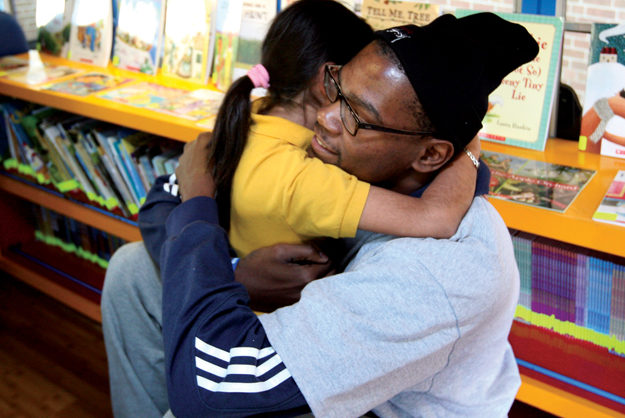 With much of our attention directed to giving thanks this month, we couldn’t help turning our focus to the OKC Thunder, an organization that defines the concept of community champions.

Unifying the entire state, as the Thunder has done from the first tipoff in 2008, might have been enough to evoke gratitude from every Oklahoman, but this is an organization that defies the odds as a matter of course, going beyond – way beyond – expectations.

Thunder forward/center Serge Ibaka believes those expectations extend to community involvement as well, acknowledging that Oklahoma has embraced the Thunder and in turn, the Thunder has reciprocated in big ways off the court. “Basketball is not everything in life,” Ibaka observes. “There is something more important than basketball, too. So for me, my teammates and the Thunder organization, it’s very important for us going back into the community to give back every time we can.”

Through its Thunder Cares Foundation, the Thunder has connected to the community with a number of outreach projects that support nonprofit groups, Oklahoma schools and other organizations. Over four years, the Thunder has made more than 900 community appearances to promote literacy, fitness and nutrition, youth basketball camps and many examples of volunteerism.

Thunder center Kendrick Perkins points to the team’s frequent interaction with children as an essential part of the organization’s outreach. “We get to go to Boys and Girls Clubs. We get to go to different high schools and different elementary schools. Each and every one of us were one of those kids and they all have a dream just like we had a dream,” Perkins says.

Thunder guard James Harden agrees that interaction with fans is just as rewarding from a player’s perspective as it is for the fans. “Every time I do an appearance and go see kids – or just people – and make them smile and impact their lives, for that time that I’m there, that’s all I can do. And that’s what makes me smile,” Harden says.

While the NBA encourages player involvement within the community as part of its global outreach initiative, NBA Cares, the Thunder regularly exceeds the recommended level of hands-on service and appearances to support the initiative. During the 2011-12 season, the Thunder finished second among 30 NBA teams in player community appearances.

“The involvement in these programs and events has brought some great moments,” explains Thunder Vice President of Corporate Communications and Community Relations, Dan Mahoney.

“It’s very important for us, going back into the community, to give back every time we can.” – Serge Ibaka

Mahoney describes the Thunder’s partnership with the Make-A-Wish Foundation last spring as an example of one of the most emotional collaborations with a charity. Lorelei Decker, then a high school senior from Putnam City North who was diagnosed with Hodgkin’s Lymphoma during her senior year, wished to be a Thunder coach for a day. Although the Thunder enthusiastically agreed when Make-A-Wish contacted them, they couldn’t have predicted that they would be on the receiving end of inspiration, as they were when they met Lorelei. “She is so special to us,” Mahoney says, “and we’ve remained involved with her progress.”

This month, despite the frenetic pace of season openers, televised games and unforgiving travel schedules, the Thunder will take time to celebrate Thanksgiving by serving a holiday meal for a local charity. Last year, in a partnership with Cox Communications, the Thunder served more than 1,000 Thanksgiving dinners at the City Rescue Mission. The same partnership has resulted in holiday shopping sprees with Target and holiday donations for families in need.

“We’ve tried to establish some traditions of giving back,” says Mahoney, predicting that the Thunder will observe many of those traditions again this season, while adding in a few new ones as well.

Mahoney notes that the Thunder Cares Foundation does not solicit public donations, but fans often contribute through their participation in various fundraisers, such as purchasing signed items that are auctioned at home games, with proceeds directed to specific causes.

Here’s a snapshot of some of the Thunder’s giving:

Reading Timeout
3,200 Oklahoma children have had a book read to them and have taken the Reader’s Pledge

The Thunder-themed, converted school bus travels to schools, community centers, museums, parks and other sites throughout the year to promote reading and literacy. Each student who visits the bus receives a free book to encourage a love of reading
More than 57,000 books have been given away so far