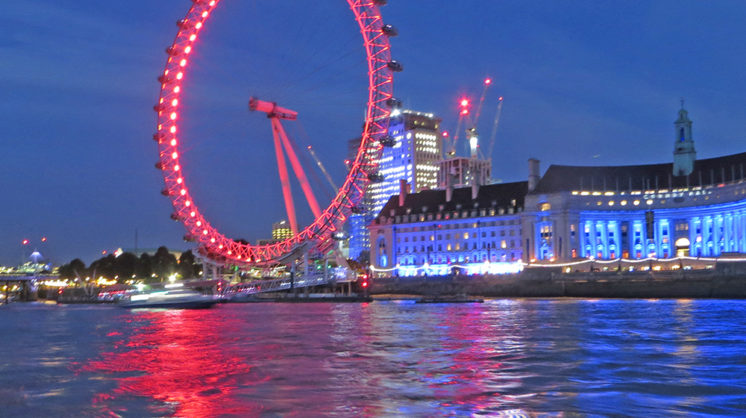 The streets and alleys of London provide endless opportunities for exploration, but the greatest path through this great city is its river. The view of London from the Thames provides glimpses of the city’s evolution from centuries-old buildings to modern towers of commerce.

My family – husband Jack and daughter Zoe and I – chose a day trip through City Cruise from London’s Westminster Pier east to Greenwich, home of the Prime Meridian. The trip east on the river took about an hour with a stop at the London Eye Pier and Tower Bridge Pier.

We had a great view of Elizabeth Tower, home of Big Ben, surrounded by scaffolding. The great bell will remain silent, with rare exceptions, until 2021. Across the river, the London Eye can take 800 guests on a half-hour rotation at a leisurely six-tenths (0.6) mph. On a clear day you can’t see forever … but you may see 30 miles. On the north bank, the towers of St. Paul’s Cathedral are easily recognized. Looking toward the south bank, cruisers can get good shots of the re-created Shakespeare’s Globe Theatre. Farther on, guests get glimpses of a replica of the 1577 Golden Hind, the galleon that privateer Francis Drake sailed around the world, bringing booty back to Queen Elizabeth I.

Contemporary architecture punctuates the skyline, with Italian architect Renzo Piano’s 95-story Shard being the tallest building in London. Londoners tend to give nicknames to some of the more unusual constructions, among those being the Walkie-Talkie, the Cheesegrater and the Gherkin.

Beneath these sky-scraping behemoths, the Tower of London sits in historic dignity. The view from the river is uninhibited by trees or tourists, allowing photographers a good shot of the compound. Just past the Tower is the Tower Bridge, which gives tourists passing under it an interesting perspective.

Throughout the trip, our tour guide gave great commentary on the sights we were passing. Beyond the Tower towards Wapping, he talked about the state of the river in past centuries, and quoted Charles Dickens, who called the area “the cholera capital of London.” In bygone times, the river was incredibly dirty and contaminated with all sorts of nasty things that drained into the waterway. Today, however, the Thames is surprisingly clean … although the swift tides keep the mud from the bottom of the river stirred up, giving it a less-than-pristine appearance.

Wapping was once the site of warehouses serving commerce on the river. Now, many of these old buildings are being converted into luxury flats. Oliver’s Wharf, once a tea warehouse, was the first to undergo restoration. 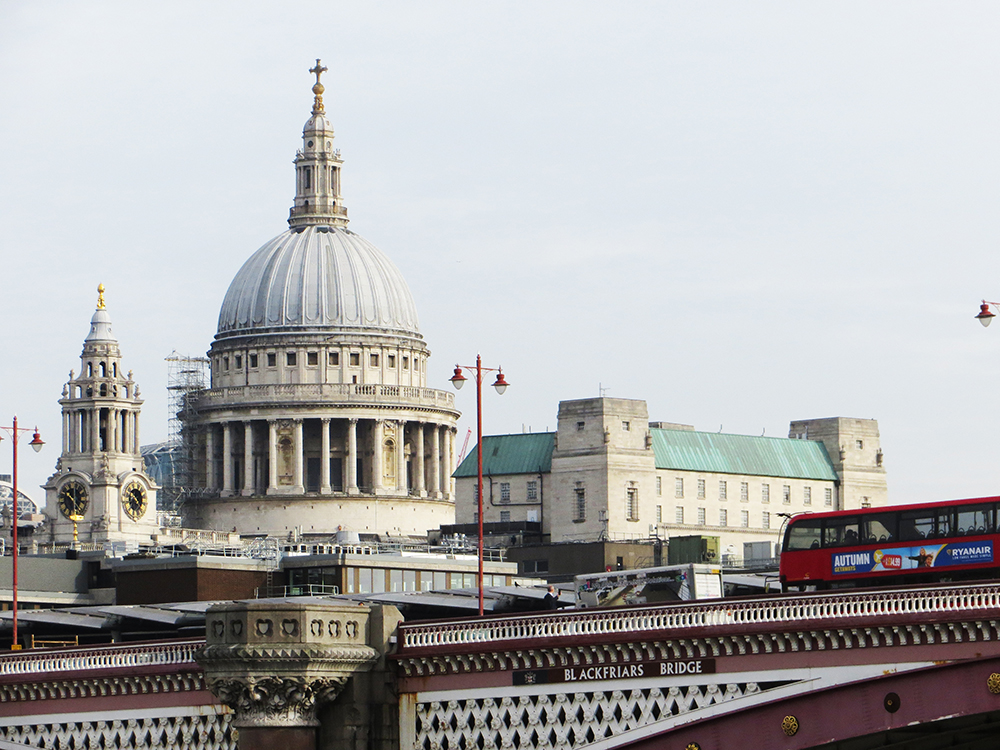 This area was also once the location of an execution dock, where prisoners were strung up at low tide using a short rope designed to make their demise slow and painful. They were left hanging until three tides had washed over them. Unless, that is, their crimes were particularly heinous, in which case they were hanged, tarred and hung in iron cages as a warning to others. The pirate Captain Kidd was one of the more unlucky ones – his body remained on display for more than twenty years.

As the river makes a big bend to the south, we came to the Canary Wharf area. In olden times, it was home to docks for ships bringing produce from the Canary Islands. Now it is a major financial center and the location of many apartments.

As we approached Greenwich (Grin-itch), we could see the masts of the 1869 Cutty Sark, the last surviving British clipper ship, which brought tea from China. Beyond that stand the classic buildings of the Old Royal Naval College.

Until I actually got there, I had no idea there was so much to do in Greenwich. It would definitely be worth an overnight stay. Even the Visitor Centre (their spelling) was a mini-museum. We knew we would have to pick and choose in order to catch our boat back to Westminster.

A real highlight of the day was a tour of the Painted Hall, originally conceived as the dining room of the Royal Hospital for old and injured Royal Navy seamen. Paintings cover over 40,000 square feet of the walls and ceiling. Executed by Sir James Thornhill between 1707 and 1726, the over-arching theme of the work is “The Triumph of Peace and Liberty over Tyranny,” and elements hail advances in science, culture, politics and commerce. 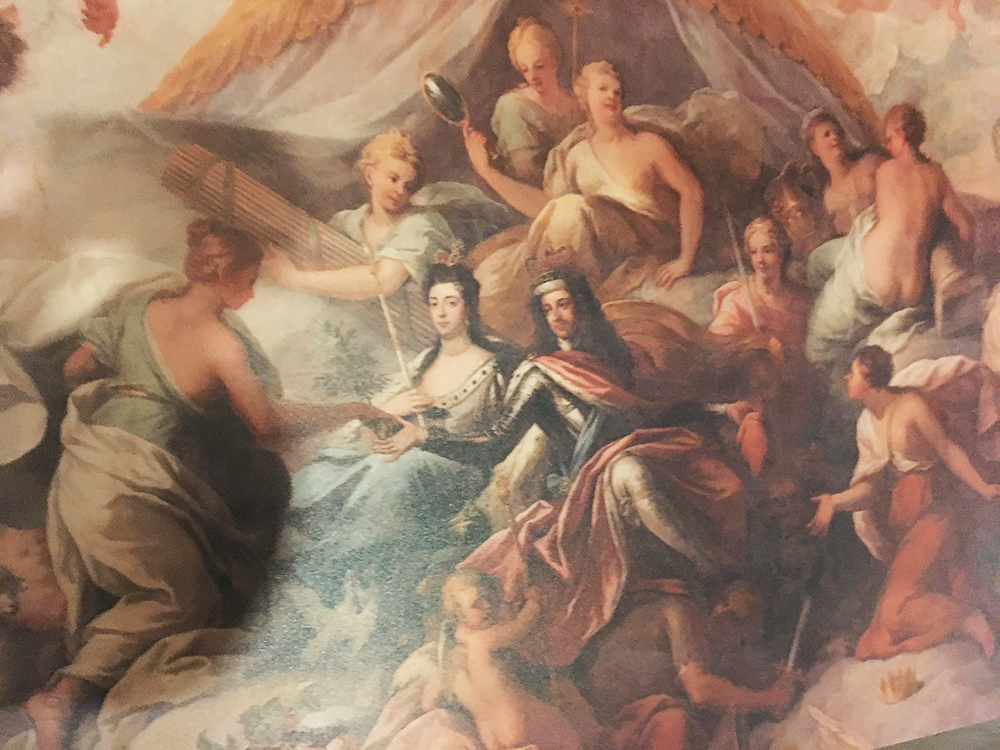 Visitors fortunate, as we were, to visit during the restoration process (which began in 2012) are able to take a tour of the ceiling, 60 feet above the floor, for a close-up look at the work, some of which must be done with Q-tips. Guides point out allegorical, mythological and historical figures. These range from Tycho Brahe, noted for his astronomical and planetary calculations but remembered for his metal nose, to Diana, Goddess of the Moon, and royals King William III and Queen Mary II. The restoration is expected to be completed by Easter 2019.

Back on the ground, we headed for a more mundane treat – lunch and a look through Greenwich Market, established in 1737 as a meat and veg market. In the last three decades, it has become a specialist designer and craft market.

Refreshed and rested, we headed for Greenwich Observatory and the famous line that defines time for the world. Before 1884, every town set its own time determined by the sun. With the development of the railroad and telecommunication systems, a standardized time became a necessity. Unfortunately, I didn’t realize there would be a long walk and a high hill involved. By the time we got up, it was time to come down.

This was one of those things that’s cooler to talk about than actually do – especially if time is short. We didn’t have time to see the exhibits at the Observatory – and just getting through the gate to straddle the line designating the Prime Meridian was going to be pricy. For a little over $14, you’ll get a great deal of information about how this spot came to define the zero-degree longitude line and set the time for the world; and you can get your picture taken with one foot in the Western Hemisphere, the other in the East.

So we left Greenwich having had a great day, but with a feeling of so much left unseen. Historic Greenwich is a UNESCO World Heritage Site – an area of tremendous importance. Samuel Johnson surely included Greenwich when he said, “When a man is tired of London, he is tired of life.” But there’s so little time and so much to see.