The Flaming Lips Delve Into “The Terror” - 405 Magazine 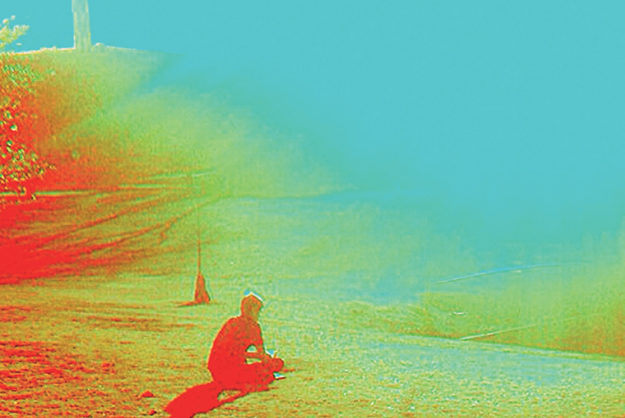 So you’ve established a reputation as experimental, boundary-pushing, densely layered psychedelic songsmiths and one of the greatest live bands in the world; people know your name, and when they hear it they think of transcendence and confetti. Where do you go from here? For their 13th studio album, the Flaming Lips’ answer is “into darkness.”

April 2 will see the U.S. release of what Wayne Coyne calls a “bleak, disturbing record,” a collection of nine tracks the band’s own announcement says “reflect a darker-hued spectrum than previous works, along with a more inward-looking lyrical perspective than one might expect.” Lest we think they’re being facetious, the album is titled “The Terror,” and its songs include “Turning Violent,” the title track, “You Are Alone” and “Butterfly, How Long It Takes to Die.” On the other hand, they have some experience with making sad concepts sound soaringly beautiful – Oklahoma’s state rock song is about the inescapability of death, after all.

Unfortunately, while the Lips will be touring in support of “The Terror,” their closest concert date confirmed as of the album announcement is Kansas City April 28, but if you happen to be in Sweden this summer, they’re rocking the Hultsfred Festival in June.

It clearly isn’t all gloom and doom and additional gloom for Oklahoma’s rock ambassadors: “Sun Blows Up Today,” a bonus track awarded to users pre-ordering the album on iTunes, is a peppy, catchy treat, as anyone who saw the Super Bowl Hyundai commercial featuring the Lips can attest. And to celebrate Valentine’s Day in their own, shall we say, distinctive style, the band recently released a compilation of love songs recorded onto USB drives … that were then embedded in life-sized, anatomically correct chocolate hearts. Which is awesome.

Music is said to be the universal language – that should be a comfort to Kyle Dillingham, Peter Markes and Brent Saulsbury, who as heartland acoustic group Horseshoe Road have been named one of 10 bands selected (from over 300 applicants) by the U.S. State Department to participate in a 35-day world tour that will visit Korea, Taiwan, Burma and Russia. Bon voyage!