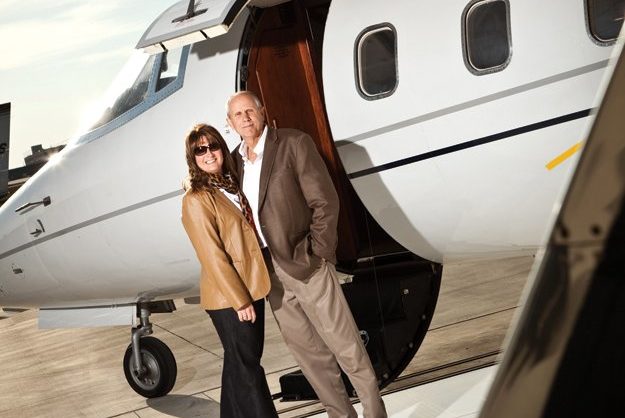 EVEN THOUGH THEY ARE LUXURY JET DEVOTEES LOATH TO FLY ANY OTHER WAY, there’s no pretentiousness when Paul and Marilynn Cohagan talk about their adventures. They’re as grounded as they come.

Their current successful enterprise is developing the Cedar Ridge Office Park in Yukon: eight acres of commercial real estate. On the side, they’re restoring an abandoned Yukon home built in 1932. Any given weekday, Paul might be dressed like your average contractor enduring the headaches that come with work on an elderly structure.

After 15 years of jetting to places as varied as OSU Cowboys bowl games to Cabo, Paul and Marilynn are birds of a feather. Their energy is contagious. They’re “let’s go!” people and they have the stories that accompany the mind-set – from African safaris to a hop across the pond to London in the Concorde. Down to earth, but flying high.

To hear them describe their romance is to get a glimpse of how they interact. They met at Wiley Post Airport in Bethany, where Marilynn had just moved her aviation insurance office and where Paul was a Gulfstream aircraft mechanic.

“I had my office set up and he came walking down the hall,” Marilynn begins.

“I just came back from a trip,” Paul takes over, “where I recovered an airplane for the Mexican government, and I came back carrying tools through the office – to tool up and get ready to go again. And I looked in the office and saw Marilynn and (Paul snaps his fingers) ‘Bing!’ A light went on and lightning struck. And we’ve been together ever since.”

“Pretty much!” a gleeful Marilynn agrees. “It was so funny because, literally, he had five-gallon buckets …”

“He just set ’em down. ‘Nice to meet you.’ Then he brought me muffins and coffee.”

“Yep. Then I started bringing her back stuff from my trips because we had customers in Venezuela, Guatemala, Mexico. So I traveled quite a bit doing maintenance on the road. And so I’d bring her stuff back – try to spoil …”

“I guess it worked.”

“Mostly it was Kahlua, tequila. Then I knew he was really listening to our conversations,” Marilynn chimes in before adding with a laugh, “but that was then. Now it’s selective hearing.”

Paul and Marilynn are air heads – in the most positive sense. When she attends yearly airshows like the massive fly-in at Oshkosh, Wisconsin, or Florida’s Sun ’n Fun, she may marvel at the sleek coolness of a World War II P-51 Mustang roaring in flight, but she’s probably wondering what its insurance value would be.

Paul made a living, and still does from time to time, working in the guts of flying machines. Besides his and Marilynn’s current business ventures, he says he was lucky to make a lot of money from the 1990s dot-com boom. He’s still a day trader.

Prices for luxury jet service primarily depend on the size of the plane and the trip’s distance. There are two Oklahoma-owned, premier jet charter services in the metro: Private Jets Inc., headquartered at Will Rogers World Airport, and American Jet Charter, based at Wiley Post.

American Jet Charter has been in continuous business longer – nearly three decades with a perfect safety record. Eleven planes are based in a cavernous hangar at Wiley Post. Private Jets Inc. dates to 1995, but its founder, Happy Wells, has flown charters for 40 years, including flying rock bands like Bon Jovi. Paul and Marilynn are fans and clients of both.

Small jets seating four people run for about $2,500 an hour; while mid-size models with roomy seating for eight can be $4,500 and up.
But, oh, what your money buys. Small-plane charter companies operate away from the main public terminal at Will Rogers, and Wiley Post has no terminal. There’s no baggage scanning, taking shoes off or checking in.

On board, your fare includes premium catering of any delights, including spirits, you’ve asked for ahead of time. The charter service will also arrange your limo or rental car at the other end, plus lodging and most any other requests.

For how that works in the real world, consider last year when Paul and Marilynn and more than a dozen other friends struck on the idea of a group Bahamas cruise. Most were not taking private jets. Their travel plans were made the average way: one-, two- or three-stop commercial airline trips, poring through travel sites for the best rates and booking in advance.

That led to the familiar routine of getting up pre-dawn to catch an early morning flight, layover(s) to switch planes, traveling all day from OKC to arrive at the Florida cruise port in the late afternoon. Unfortunately, their companions ended up missing a connection due to aircraft maintenance problems. Ultimately, the cruise ship had to wait for them.

“So here’s the difference,” Paul said. “They get up at four in the morning. They go through all the mess – two hours early, through security, baggage check. We’re sitting at home having breakfast, running our regular routine and errands, and we don’t leave until a comfortable 10 o’clock in the morning.

“We don’t touch our bags. You go through the gate and drive your car right up next to the plane, they take your bags, put ’em on the plane,” Paul said. “On the plane, you’ve got catering – wine, cocktails, whatever you like. We are in Florida in 2½ hours. We landed at an airport that was 15 minutes from the dock. We’re sitting on the cruise ship waiting for everybody to show up and they’ve been traveling since 4 o’clock in the morning.”
Paul and Marilynn admit they’re spoiled by the luxury and convenience of the jet set life. Instead of air travel being part of the hassle before going on holiday, flying on a luxury jet becomes part of the vacation experience.