The Magic and Majesty of Iceland - 405 Magazine 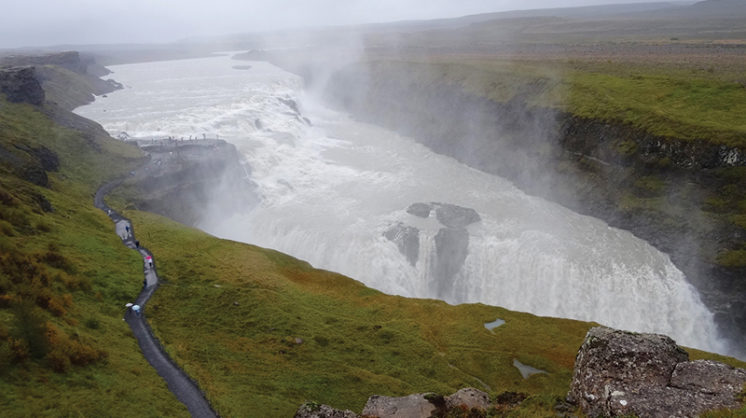 As we wound along Iceland’s otherworldly Snaefellsnes Peninsula toward the National Park of the same name, Gus, our tour guide and local native, explained, “In Iceland’s countryside, you might find yourself on a remote, straight road – and for no reason and for only a moment, the road will bend.”

Snaefellsnes, located on Iceland’s rugged west coast, is one of the country’s three National Parks, boasting not just dozens of glacier-fed waterfalls, but also the famed glacier-covered volcano that inspired Jules Verne’s Journey to the Center of the Earth.

“The reason for the bend in the road,” Gus continued as the bus rolled toward the Atlantic, “is because without the bend, you would drive straight into the home of an elf.”

There were many things about Iceland to provoke incredulity, I’d learned since my arrival. The country has roughly 130 volcanoes and about as many people in prison. There is only one four-lane road, a nationwide obsession with liquorice (their spelling) and a mayor (another hat Gus wears) who looks shockingly similar to Flaming Lips frontman Wayne Coyne. Thanks to the geothermal energy created by the aforementioned volcanoes, Iceland claims the title of cleanest country in the world, and the only cognate to English in its unruly language is the word berserk.

After a week of traveling around the country, ethereal statements regarding the land’s resident elves and grumpy trolls continued to baffle me the most. Iceland’s history was not just full of lore surrounding ancient unseen beings, but rich with contemporary tales of citizens who had built homes without consulting the neighboring sprites, only to have their homes burn down weeks later.

The citizens charged with communicating with said spirits, known locally as “hidden people,” in order to prevent such vengeful incidents were not paranormal enthusiasts operating on society’s mystic fringes, but rather paid government employees. Outside my hotel a short walk from downtown Reykjavik, a plaque honors the area’s local imp, who, had he not granted his permission, would have stopped the hotel from ever being built. 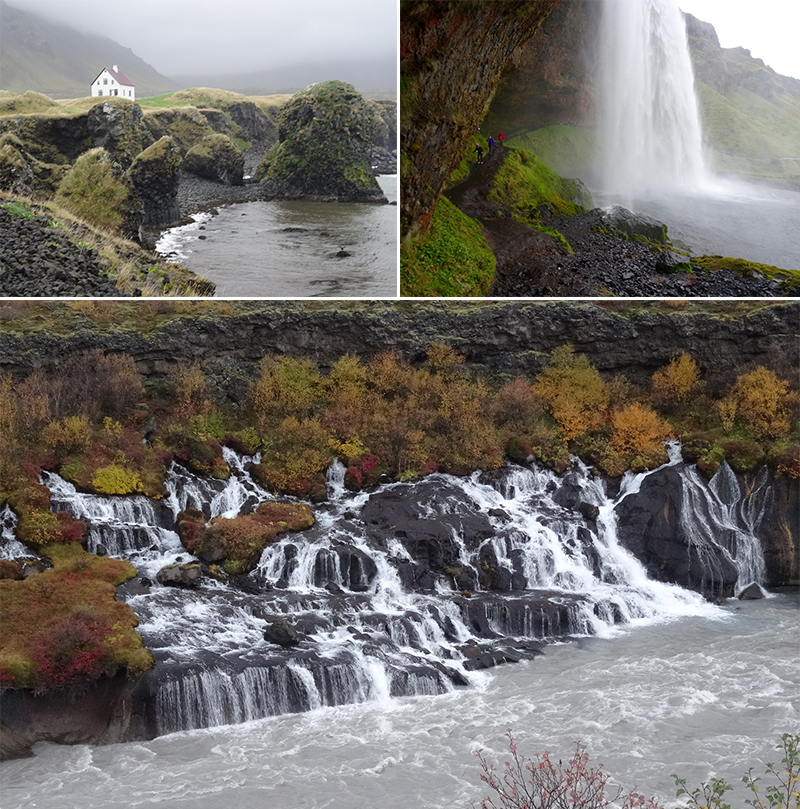 clockwise from top left: An oceanfront country home outside of Iceland’s Snaefellsnes National Park // Seljalandsfoss, a 200-foot fall just beyond the Golden Circle where visitors can walk behind the cascading water // Hranfoussar: a series of several waterfalls near Snaefellsnes that pour out of a lava field

And while, according to Gus, 99 percent of Iceland’s roughly 350,000 citizens would not actually admit to the existence of elves, getting someone to admit they didn’t believe, for fear of being overheard by said sprites, was as difficult as spotting Iceland’s Northern Lights on a cloudy night.

Iceland is indeed a magical place, and even if one dare not embrace the idea that the lichen- and moss-covered lava fields and steaming sheep-dotted pastures were cohabitated by citizens unseen, the nation’s magic in terms of its scenic and sometimes sinister beauty is equally, if not more, enchanting. Most alluring, and a day drive via tour company or rental car from Reykjavik, is the renowned “Golden Circle.” This epic drive, which is the opposite direction from Snaefellsnes National Park, includes monumental waterfalls, geysers and even snorkeling. While at first consideration, the utterances “snorkeling” and “Iceland” pair about like “delicious” and “sand,” Thingvellir National Park, the first stop along the Golden Circle tour, offers exactly that experience.

Thingvellir, also a UNESCO Heritage Site, is a stunning park, as well as the point on the planet where the American and Eurasian continental plates collide. Along this fault, where each year the continents are pushed apart a few centimeters, is a river where visitors brave the frigid, crystal-clear water – and if swimmers can manage the 35-degree water, it offers the rare opportunity to touch two of the earth’s continents at once.

Beyond Thingvellir are the geysers at Haukadalur. While the original geyser is no longer erupting due to seismic activity, a hundred yards away is Strokkur Geyser, which erupts up to 100 feet in the air every 10 minutes. A constant cloud of steam hangs over smaller colorful geysers, spurting sulfuric gas from mud puddles into the dense air. 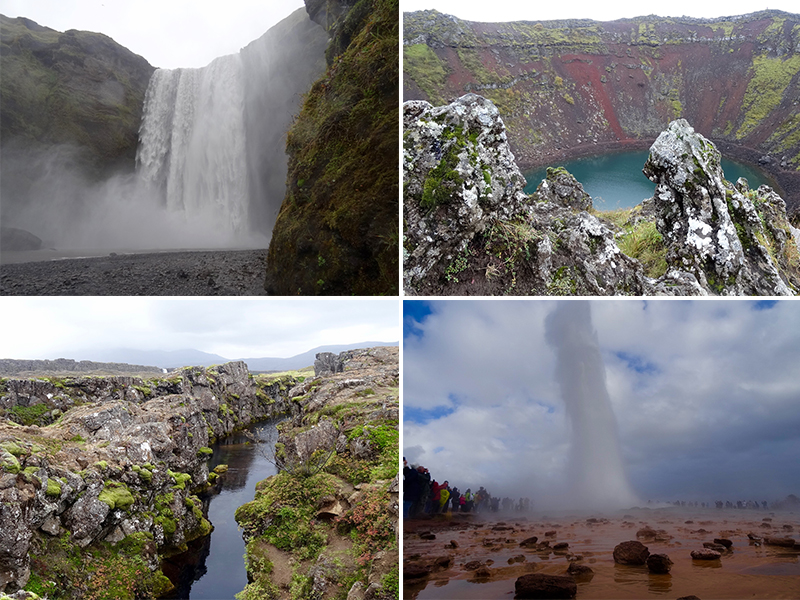 clockwise from top left: Skogafoss: located just off the Golden Circle, this 200-foot fall is 85 feet wide, and the top is accessible via a very wet walk up an adjacent staircase.  // The colorful Kerid Crater along the Golden Circle // In Thingvellir National Park, a UNESCO Heritage Site, this water separates the North American and Eurasian continental plates. // The mighty, sulfur-smelling Strokkur Geyser, erupting 100 feet high at one of its ten-minute intervals.

Further down the road, soft blue water sits at the bottom of Kerid Crater Lake, a perfectly circular volcanic crater surrounded by harshly sloping bright red walls coated in green lichen. While Kerid is by far the eeriest of all the stops along the Golden Circle, it is also the least visited, so for those seeking respite from the throngs of tourists in buses and vans, it is an invaluable moment of calm before heading to the Gullfoss Waterfall: the most impressive and by far the most crowded stop on the Golden Circle Tour.

At Gullfoss, an international smattering of selfie-stick enthusiasts and cruise-loving retirees gather around the voluminous Hvita River as it rolls through otherwise sparse landscape, falling in two dramatic stages. The first is a smaller but powerful tumult, followed by a far more significant 100-foot fall that in dramatic fashion kicks up an ethereal mist – awe-inspiring on even the rainiest of days. On the sunniest days, Gullfoss creates rainbows in such quantity that Iceland’s hidden people might just seem plausible.

While the Golden Circle tour is Iceland’s main draw, much more of Iceland lays beyond and is still within a day’s drive from Reykjavik. At Seljalandsfoss, visitors can walk along the cliffside behind a roaring waterfall. Skogafoss, a few miles down the road, is one of the country’s biggest falls, standing 85 feet wide and plunging 200 feet. A walk up 377 misty stairs allows visitors to make a very wet ascent to view the enormous fall from the top, and on a clear day, it offers a remarkable view of the Pacific. 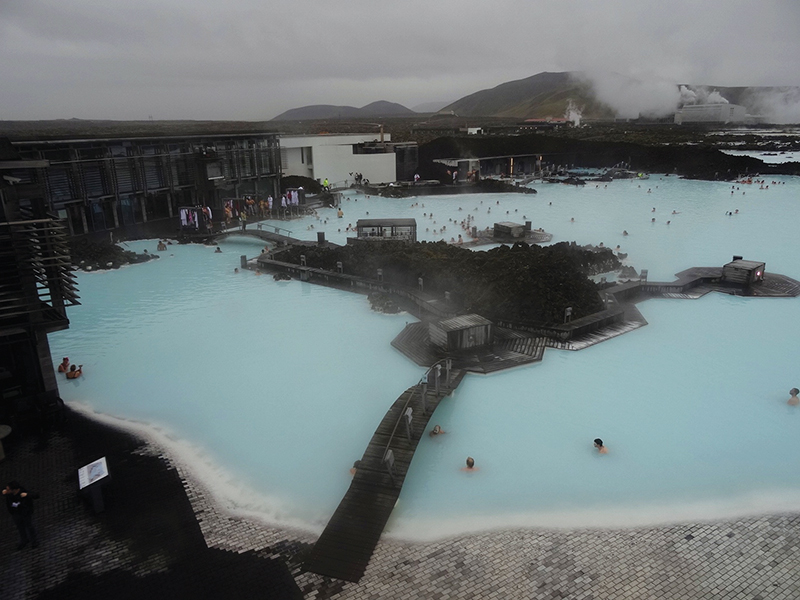 While Iceland’s falls are not to be missed, most unique of all of Iceland’s attractions is the renowned Blue Lagoon Geothermal Spa. Considered one of the Wonders of the World by National Geographic, the Lagoon’s geothermal, heated pale blue water surrounded by harsh black lava fields is a popular gathering spot for locals and tourists alike. The Lagoon, thanks to its silica mud bottom, is said to have healing properties, and its spa services are among the best in Iceland.

Spanning two continental shelves, boasting thousands of waterfalls and glaciers, and best visited between June and mid-September (or later if you want to see the Northern Lights), Iceland is unrivaled in its mysterious allure. It would be felonious to leave Iceland without taking a dip in the Blue Lagoon’s healing waters, driving the Golden Circle … and if you like codfish prepared any way imaginable, you could do a lot worse. While historically a stopping point for flights between the U.S. and Europe, Iceland is worthy of a journey all its own. But if you go, just be sure to pay attention where you walk. You don’t want to bump into an elf – unless given permission otherwise, they’d prefer you stay off their lawn.