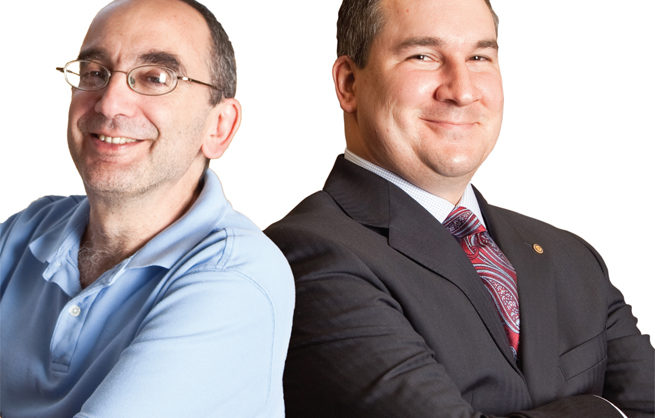 In the battle for Oklahoma’s political hearts and minds, David Blatt and Michael Carnuccio helm the rival political think tanks commonly portrayed as liberal versus conservative juggernauts … they both really hate that.


Carnuccio, who heads the shrink-government, free-market Oklahoma Council of Public Affairs, grates at the label. It too easily equates with Republican partisanship. After all, this is a state where blank campaign signs could be pre-printed with the slogan, “the conservative candidate – (insert name here)” and sell wildly.

They’re both right to complain about the ready-mix media label.

In Carnuccio’s case, consider the council’s October “hit piece” on Republican Gov. Mary Fallin. At least, that’s how the governor described it. She winged off a two-page email to the council’s board members – Carnuccio’s bosses – complaining about it. The scrap was over Fallin’s pending chairmanship of the National Governors Association. She serves on the executive committee in the company of New Jersey Gov. Chris Christie, a national political light with presidential candidate prospects.

“Unfortunately,” she wrote, “OCPA staff seems intent on continuing to demagogue the NGA (National Governors Association) and my leadership within the organization as a ‘big-government lobbying organization’ without presenting the real facts that it serves as an effective advocacy group on behalf of our nation’s governors and state primacy.”

For the council to oppose a self-described conservative Republican governor belies its casual classification as a front group for the party. Despite Fallin’s influential attempt, the council’s board didn’t back off its judgment: The governors association and others like it are “trade associations” to grow the size of government and Oklahoma elected officials should drop out of all of them, Carnuccio says. The council’s mission runs deeper than party lines.

Blatt’s Oklahoma Policy Institute emerged only five years ago, but quickly earned its “liberal” sticker. Its positions against income tax cuts, pro more funding for education and a wide range of government services did that. But in 2010, OK Policy joined Republicans in opposing a big-government, pro-education state question. The proposal would have forced legislators to match the regional funding average of K-12 schools of surrounding states in three years. Despite OK Policy’s strong support for more education spending, the $1.7 billion that the measure would have added to schools would have starved other vital programs.

“We work really hard to avoid being labeled and to show how our positions are rooted in some core principles and values,
not rooted in an ideology or party platform.”  – David Blattd

Blatt’s explanation of setting up OK Policy as an informational, independent policy group applies equally well to the council. “We work really hard to avoid being labeled and to show how our positions are rooted in some core principles and values, not rooted in an ideology or party platform,” he said.

For leading two think tanks with mostly opposite goals, the men share a remarkable number of life coincidences.

Both began their lives outside Oklahoma. Blatt was born in Montreal to a double-minority family: Jews in predominantly Christian Canada, and English speakers in a politically contentious, French-majority province – Quebec.

Carnuccio was born at Methodist Hospital in south Philadelphia, the same place his parents and older brother and sister were born. Both were raised by English-teaching moms, who later delved into teaching it as a second language. Blatt excelled at English. Carnuccio survived it, but took to math.

Their familiar moorings were uprooted when they were both 13. Blatt’s father, an English-only-speaking accountant, foresaw

a dearth of employment opportunities. The family moved far out west to Calgary, Alberta province – the Canadian Bible Belt, oil capital and home to cattle barons. The Carnuccios moved to Mustang for Blatt’s father to manage the Dana Corporation manufacturing plant, which made chassis for Ford Motor Co.

They share other coincidental connections, but work style isn’t one of them.

OK Policy operates from the 10th floor of Tulsa’s Sun Building, a worn relic touted for its affordable leases. Papers pile up on the desks and work tables in Blatt’s office like layers of black-and-white cheese slices in a buffet of policy points that visitors can sidle up to in a pink plastic chair. The headquarters’ main entrance opens onto the break room and its coffee pot.

Carnuccio works from a renovated two-story mansion four blocks from the Capitol. The nicely stained wood grain of his executive desk is easily appreciated because it’s clutterless. A deep leather couch nearby beckons for more casual talk.

The difference is due to the age and influence of the Oklahoma Council of Public Affairs. It’s celebrating 20 years in existence, growing from a state-focused start-up to a powerful player on the national level of public policy research groups.  This September it will host a national convention of free-market think tanks. It expects about 1,000 people at the Cox Convention Center.

The council’s biggest annual event, the Citizenship Award Dinner, involves giving out scholarships, but its list of speakers over the years is a major contributor to the council being labeled conservative. Much like Fox News, with its habit of employing presidential nominees as commentators, who all happen to be Republican, the event’s speakers have included Republican stars like vice presidential nominee Paul Ryan and Newt Gingrich.

It’s true that the state’s “conservative” Republican elected officials align more closely with the council’s political views, but the council is an independent policy advocate, Carnuccio says. He views the council’s mission as an uphill battle even in a red state. The more society depends on free market solutions and trims back government, the more prosperity.

He points to Republican Party control of national government from 2000 to 2006.

“You had Republican control of the Senate, the House and White House. And the approach was, “Well, we’re going to do our things, but we’re still going to do it through government. Compassionate conservatism, but through big government.”

During that time, annual deficits shot up from as little as $250 billion, topping out at $1 trillion by the time President Obama was inaugurated. A free market think tank is going to oppose growing government, no matter who’s doing it, he says.

Meanwhile, the state’s political liberals flock to OK Policy’s work like moths to a flame. But Blatt echoes Carnuccio’s claims – his organization’s focus is on issues and facts, not partisanship.
“We hear from a wide range of people that OK Policy is critical to public debate and decision-making in Oklahoma. Our work is needed and progressives appreciate us as being a progressive voice, but many Republicans, as well, want to hear a range of voices.

“I think most people, including elected officials, don’t think that either side or either party has a monopoly on the right answers. The fact is we can provide the voice for the other side of the debate on a lot of issues.”

If there’s anything both the Council of Public Affairs and the OK Policy Institute want for Oklahoma, it’s prosperity. They just have different ways of thinking about how we should get there.

OK Policy – Oklahoma’s government is a strong partner for better schools, up-to-date infrastructure and a healthier population. “This goal of shrinking government to where you can drown it in a bathtub won’t work,” Director David Blatt says. “Oklahomans may not want to be Massachusetts, but we don’t want to be Bangladesh, either.”

Oklahoma Council of Public Affairs  – Limited government, individual liberty and a free-market economy. “Our challenge is not in the issues, it’s how you want to get there,” President Michael Carnuccio says. “Do you want bigger government, or do you want to empower your people?”