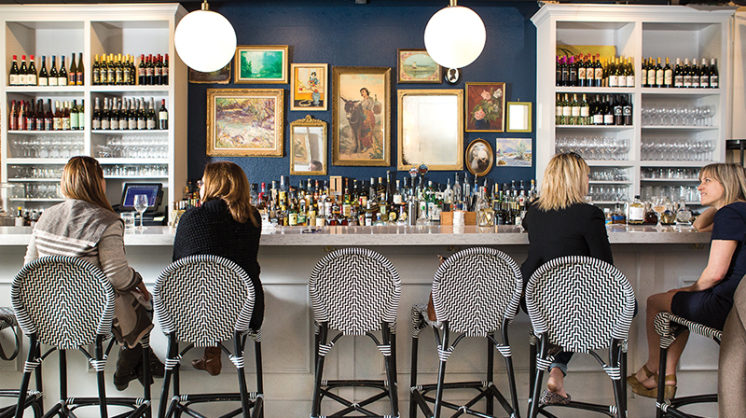 Oenophiles might be the subject of mockery for certain offputting mannerisms (loudly chewing wine, the old swish-and-spit) and saying things like “flinty nose” and “smoky bottom,” but they deserve credit for the concept of terroir – the consideration of geographic factors and how they affect the final product. In a wine sense, that refers to elements such as temperature and soil chemistry, or whatever other variations explain why the same vines tended the same way will produce different-tasting grapes in different locales. I believe the concept can also apply to restaurants: Even if the concept and staff were the same elsewhere, wine bar The Pritchard gains a little extra something as a result of being part of the Plaza District community.

To be fair, the space would work just about anywhere. It’s a single narrow room with an open kitchen in the back, inviting bar to the west and one long stretch of moss-green booth dotted with tables to the east. The dark wooden chairs, marble bar top, simple white walls (framed art notwithstanding) and black ceiling combine for an atmosphere that’s simple and sleek but still welcoming and cozy.

About the name, General Manager Mindy Magers explains, “Pritchard Hill is the most prestigious area of Napa Valley, but also a small community of farmers.” Its use here, she said, reflects the restaurant’s farm-to-table philosophy, as well as a sense of belonging amid the tightly knit Plaza District.

“We support small boutique wineries whenever we can as opposed to conglomerates, because that way we’re supporting the actual families who put the work in to make the best stuff.
“But,” she adds, “definitely quality, quality, quality.”

She’s speaking of the wine selection, but even if you can’t tell a malbec from a merlot, you’ll find plenty to love in terms of food. The menu is the creation of Chef Shelby Sieg, who has developed a small-plates approach that she described as a deliberate means of allowing guests to customize their meals – “It’s like Choose Your Own Adventure,” Magers puts in – and to invite sharing and conversation among diners. There’s that feeling of community again. 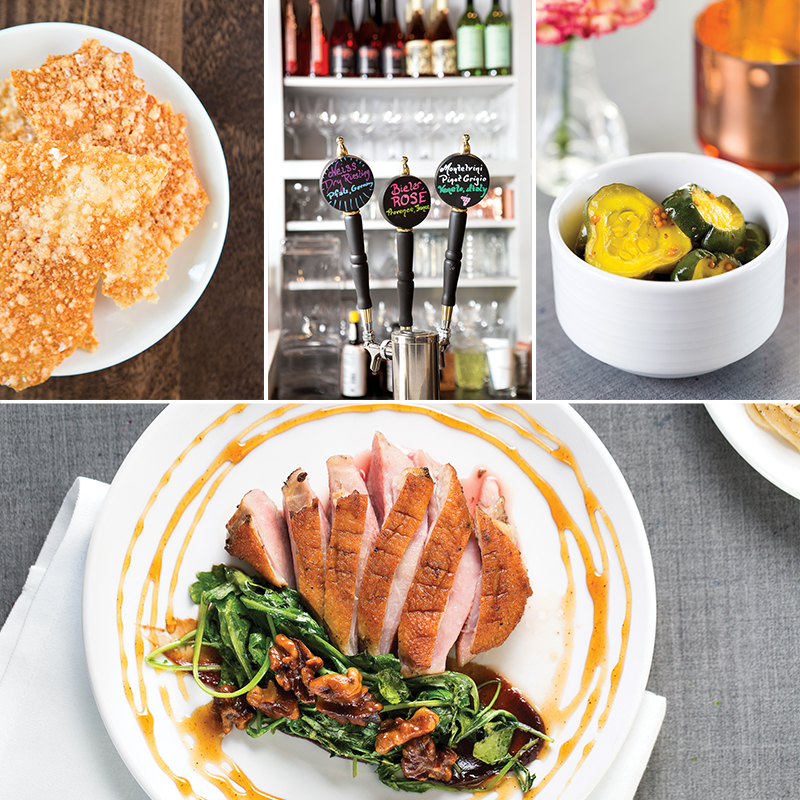 The menu is in a constant, deliberate state of flux, with a couple of dishes being pulled and replaced regularly for seasonality or availability of ingredients or just so Sieg can try something new.

Start with the lavash, a light, crunchy wafer with a powerful flavor from baked-on cheese, or pick your favorite from the selection of cheeses. I’m fond of the creamy, semisoft Breibousse d’Argental with its accompanying dollop of honey pudding (it’s a little salty on its own), but there’s plenty of variety. You can also get dishes of olives, candied pecans or pickles that have an introductory sweetness and lingering tang, but without a huge whack of briny vinegar that might wipe out your palate. Word of advice, though: A few pickles are included as part of the deal when you order the fried chicken entree – and I said “when” because I have faith in your judgment, and they’re excellent; boneless morsels done to juicy perfection inside with a crisp, just-on-the-verge-of-blackened skin.

If you pick just one of the snacks, though, make it the Gruyere dip with pancetta, accompanied by crostini dippers. It’s so rich. So rich and creamy and delicious and redolent with garlic and completely excellent.

You’ll also likely want a side or two, such as the richly scented cauliflower, Brussels sprouts with chorizo or the simple but impeccably executed roasted beets with little pinches of chevre, which both look and taste fantastic. And don’t overlook the cacio e pepe, a pasta dish with plenty of cheese and black pepper. 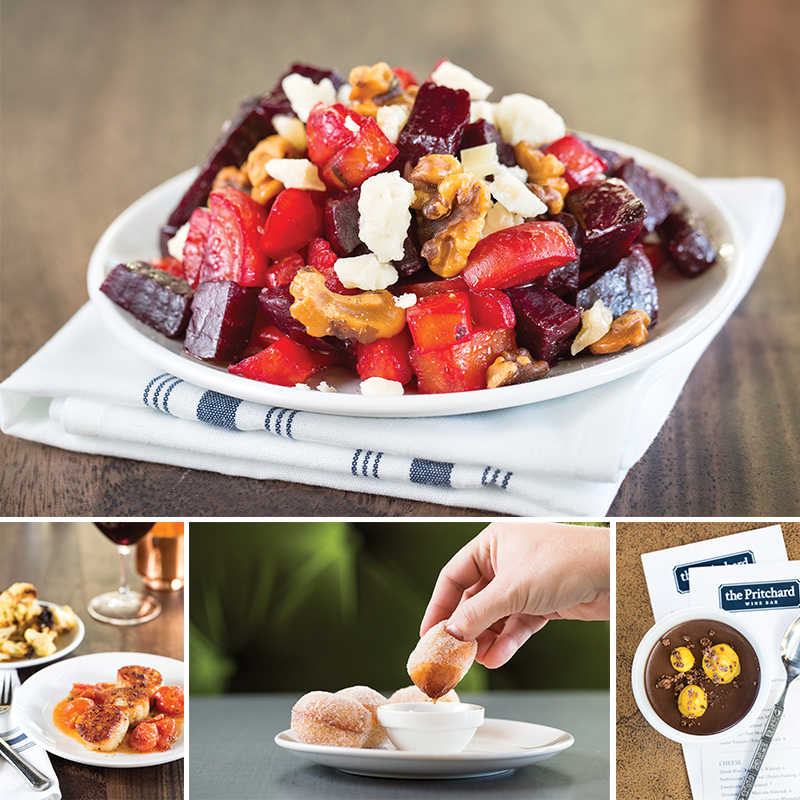 For entrees, Chef Sieg told us the rich slices of seared duck breast with a drizzle of juniper gastrique constitute her favorite thing on the menu … but I think I’d actually vote for the delectably tender scallops, especially with the burst of citrusy acid from their cohort of blistered tomatoes. I’m normally at some pains to eat around any tomatoes I might encounter unless they’re in marinara form, but these are wonderful.

While the house-made doughnuts are technically bite-sized, the application of a little discipline to take smaller bites should prevent you from having to reply “Mmmfmffm” when the server asks whether you need anything else because your oral cavity is filled with warm, sugary goodness. Not that I’d know anything about that. The fresh pastries do come with a chocolate dip, but if that’s the way your palate is leaning, I’d recommend the pot de crème instead. Aside from being delicious in its own right, the dessert is a nice example in microcosm of the menu’s overall balance; its small dollops of passionfruit are immensely flavorful, but its intense tanginess fits perfectly within the overall sweetness of the mousse-like dark chocolate.

A table for one can be fun, but with so much to pick from, you’d be best served by rounding up some friends and taking advantage of the shared plates approach – after all, things tend to go better when you’re part of the right community.

While dining through The Pritchard’s menu is a long if delicious prospect, there’s even more to love on weekends thanks to its distinctive brunch offerings.

“People were surprised that we do brunch on Saturday,” beams Sieg, “but when I moved back here, that was my biggest complaint – that not enough places do it on Saturday.”

She adds, “We also do a different approach to brunch; it’s not a real egg-heavy menu. Some people think brunch has to have eggs, but there’s a little more variety here.” With a laugh, she then admitted that diners can elect to add a slow-cooked egg to any dish, so do feel free to follow your preferences.