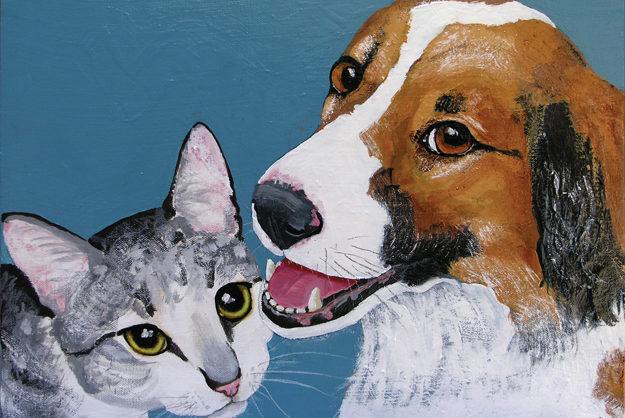 Featured Creatures
June 1, IAO Gallery
Local artistic pros draw inspiration from shelter dogs and cats awaiting adoption, and the proceeds from selling the works they produce help fund the operations of Pets & People Humane Society. Focusing on homeless animal moms in 2013, “Sit. Stay. Art!” is an annual collaboration in which everybody wins, including the canine and feline stars of the show.

A Piece of Her
May 4, Riverwind Casino
Jewel loves horses (she rode one 12 miles to reach the several jobs she worked in her Alaska hometown) and hard work (see above) and music – but you knew that one, since her career thus far has encompassed more than 27 million album sales, four Grammy nominations and over a dozen smash singles, many of which she’ll be performing as part of her Greatest Hits tour.

Best When Shared
May 4-5, Andrews Park
The event is turning the big 4-0 this month, but then again the May Fair Arts Festival has been a big deal since day one; that’s what you get when you combine dozens of juried artists from across the country, including 2013 Celebrated Artist Tim Kenney, live musical and street performers, a 5k run, kids’ art education and great food vendors and invite the community to enjoy together.

Lasting Looks
Through May 12, National Cowboy & Western Heritage Museum
Much of the museum is undergoing renovations, the better to exhibit and explicate the art, culture and story of the American West, but organizers have made certain to maintain some displays that exemplify that commitment – like the brief pictorial history of an influential Great Lakes tribe titled, “An Enduring Legacy: Photos of the Otoe-Missouria People.”

Creative Force
May 15-June 1, IAO Gallery
Even if a soldier survives a war, how does he or she come back from it to re-enter normal life? The Combat Paper Project uses the act of creation as connection and catharsis, turning actual uniforms into paper that is then used as a vehicle for emotional expression. The international traveling art exhibit is being held over in Oklahoma, including a special reception on Memorial Day.

Sound Off!
May 25-26, Stephenson Park
If you like music, you should probably think about heading to Stephenson Park this Memorial Day; if you love music, there’s no question about it – the dates should already be circled on your calendar. Tasty food, free admission and some of the smoothest, sweetest sounds around make the Edmond Jazz and Blues Festival a must for over 10,000 listeners … but there’s always room for more.

Power Walking
May 25-27, Paseo Arts District
More than 60,000 people will throng to the few blocks that form the Paseo over Memorial Day weekend, drawn by the dozens of musicians on two stages, food court featuring far-flung genres and overflowing cornucopia of creativity – over 80 guest artists will fill every gallery and the streets themselves with marvels in every conceivable genre. Welcome to the 37th annual Paseo Arts Festival.

Dynamic Duo
May 31-June 7, Civic Center
Think New York City, Paris, Naples … then think the opposite. Tuna, Texas, is terribly small, but delving into its doin’s makes for a major event – especially for frenetic actors Donald Jordan and Jonathan Beck Reed, who appear as 20+ characters from DJs Arles and Thurston to Tastee Kreme waitress Helen Bedd and Yippy the Dog in CityRep’s speedy, silly production of “Greater Tuna.”

Forward Momentum
May 13, Rose Creek Golf Course
The late, great Wayman Tisdale was a man of impressive musical skill, exceptional athletic ability and boundless joie de vivre. He was also an amputee, an experience that inspired the launch of his namesake foundation to help others, especially those without insurance, obtain prosthetic care – and via the second annual Wayman Tisdale Memorial Golf Tournament, you can help them keep their lives moving ahead as well.