Thunder on the Horizon - 405 Magazine 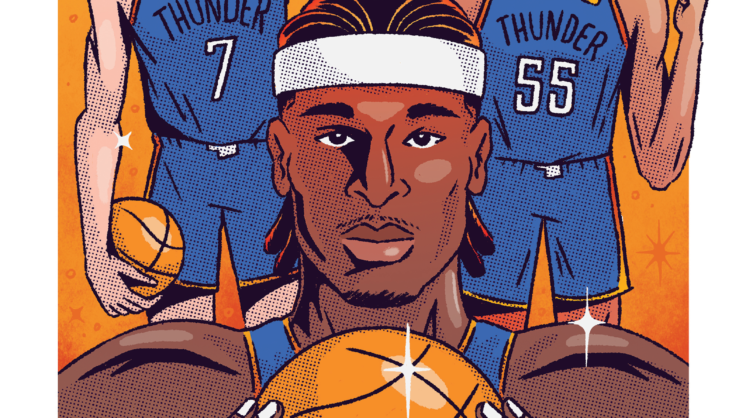 OKC looks to make some noise in a new NBA season.

The Oklahoma City Thunder are on a trek to regain their once-prominent reputation around the NBA after two straight losing seasons and the ever-changing bottom half of their roster.

Over the last two seasons, the Thunder have combined for a 46-108 record (.299), but the multiple losses were in preparation for things to get better, which they already have.

In the 2022 NBA Draft, OKC acquired four talented guys to help turn this franchise around. A little more than a month before Thunder training camp, OKC’s second overall pick, Chet Holmgren, suffered a Lisfranc injury in his right foot, which will cost him his entire rookie season.

While that changes the instant trajectory of the Thunder, it doesn’t alter the franchise’s future as far as assets, and not to mention, they have another rookie that should make an immediate impact in shooting guard Jalen Williams out of Santa Clara. Their two other picks, Jaylen Williams and Ousmane Dieng, have the potential but may take longer to make a huge impact.

Though OKC’s coveted top pick is out for the year, the top half of their roster wasn’t half bad to begin with. Between Shai Gilgeous-Alexander, Luguentz Dort, Darius Bazley, Kenrich Williams, Tre Mann, Aaron Wiggins, Jeremiah Robinson-Earl and even Mike Muscala, the Thunder have proven that they can be competitive when completely healthy.

The big question is, will OKC look primarily at development and draft positioning this season, or will they do the best with what they have available? The answer to that question is inconclusive; we don’t know, but I’m sure it’ll be hard not to compete with the young talent playing inside the Paycom Center.

Here are some things to expect from the Thunder this season.

Shai Gilgeous-Alexander will likely be an All-Star caliber player. Last season, he seemingly got whatever he wanted on the offensive end of the floor, averaging 24.5 points, 5.0 rebounds and 5.9 assists per game on 45.3% shooting from the floor. However, while I say he’ll be an All-Star caliber player, I don’t think he’ll be named an NBA All-Star because of the point guards ahead of him.

Most Thunder fans would say Bazley’s tenure with OKC has been disappointing and inconsistent, but I’m projecting a good season for him considering he’s playing for a new contract. Last season, Baze averaged 10.8 points and 6.3 rebounds in 69 games. I’m predicting a better season for the power forward this time around, somewhere around 15 points and 8 rebounds per game.

Surprise! Jalen Williams is better than we thought

Williams flew under the radar because he’s in the same Thunder draft class as Holmgren, but fans would be much more excited about him in any other draft situation. Now that Holmgren is out, Williams will get more reps and exposure.

He’s reminiscent of a young James Harden in many ways. While there are differences, I look at Harden’s rookie stat line and see Williams being better his first year because he’ll have more opportunities earlier.

The Thunder’s new season begins Oct. 19, with the first home game Oct. 23; buckle yourselves up for another ride!