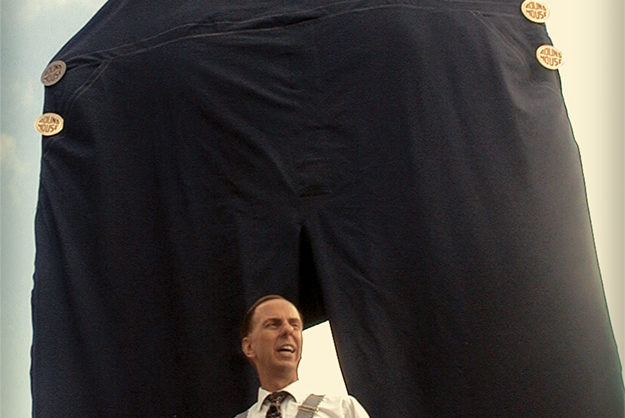 The Sooner State is known for exports like natural gas, oil, wheat and beef, but world-famous smokers and grills? Jaw-droppingly gorgeous muscle cars? You bet. These premier products are undeniably cool … and Oklahoman to the core.

Oklahomans love making great things. We export over $4 billion a year in goods and services to more than 190 international markets. Reigning as the ninth-biggest state exporter of boilers and containers is impressive, but heavy metal objects don’t offer much cachet. Instead, we rounded up made-in-Oklahoma products with global appeal that will make you say, “Wow!”

We found a pre-statehood clothing company embraced by celebrities; a mechanic shop in demand by muscle car fanatics; a maker of premium smokers favored by professional and amateur barbeque champs; and a software company that’s at your service in hotels – but only behind the screens.

Round House Prides Itself On Being The Largest Maker Of American-Made Jeans And Overalls. The Only Thing Better Than That Is They’re All Made In Wewoka And Shawnee.

The 110-year-old garment maker is the oldest manufacturer in the state and exports around the globe to more than 25 countries. Its notable celebrity sightings include actor Christopher Walken wearing Round House overalls in the movie “Joe Dirt,” and country singer Miranda Lambert sporting them on her honeymoon with husband Blake Shelton.

“Japanese customers love American brands with a long history of quality,” he said. “The same jeans or overalls that you can buy at a western store here can be purchased at a high-end boutique in Shibuya, Tokyo.”

About 80 employees make over 1,000 denim garments a day, mostly woven from Oklahoma cotton. One 17-foot-tall pair of overalls holds the Guinness World Record for the world’s largest.
Although many garment manufacturers have moved to China, Mexico and other low-wage locales over the years, the state’s 2011 exporter of the year plans to stay buttoned down in Oklahoma.

“Our brand is based on being made in America,” Antosh said. “We would never think of moving overseas.”

Classic Recreations In Yukon Caters To Clients Worldwide Who Love Muscle Cars And Possess An innate Need For Speed. But Sometimes The New Owners’ Reactions To The Stunning And Powerful Shelby Speed Demons Created By Owner Jason Engel And Crew Are Completely Unexpected.

“We had a client fly in from Maine to view his Shelby, and once he started the car he did a huge donut in the parking lot here at our facility,” Engel said. “Tire smoke was boiling out everywhere and Our Employees’ Mouths Hit The ground. That was a huge shock.”

Classic Recreations opened in 2004 and has since restored and crafted more than 150 custom sports cars, mostly classic Ford Mustangs. They’ve been delivered to movie stars and pro athletes and to places as far away as Russia and Sri Lanka.

Classic Recreations’ premier and most powerful model is the Shelby GT500CR 900S, which sells for around $200,000. It can tap 750 or more horsepower running on 91 octane – something of an engineering marvel given the power-generating limits of gas station fuels. This roadrunner has hit 191 mph and roars from zero to 60 in 3.5 seconds.

Engel himself owns two Shelby models. He grew up in Yukon surrounded by muscle cars that his father sold. He was not unknown to local law enforcement. He says driving a true muscle car is “almost euphoric.”

“I have had a fair share of speeding tickets in my lifetime here in Oklahoma, but the older I get the more cautious I become,” he said. “At one point as a teenager, driving my modified Mustang, I had over 13 tickets on my record.”

A Company Worth Checking Out

You Won’t Necessarily See The Monscierge Brand During Your Next Luxury Hotel Stay, But There’s a Good Chance The Oklahoma City Tech Startup Will Make Your Visit Terrifically More Enjoyable.

Since its launch in 2009, the rapidly growing company has been knocking out home runs (its headquarters is across the street from Chickasaw Bricktown Ballpark) in the hotel industry. Twelve of the world’s top 15 brands are clients, including Marriott, Doubletree and specialty groups such as NYLO in Dallas.

Monscierge creates guest experience software that’s usually branded under the hotel chain’s name. As a traveler, you may be closer to home than you think if you’re tapping a 42-inch Virtual Concierge touchscreen in a Novotel lobby overseas. If a hotel offers a smartphone app to order room service, book excursions, check out and more, Monscierge probably wrote the app for that.

Hundreds of hotels across the globe – from Los Amigos Beach Club on Spain’s Southern coast to the downtown New York City Marriott  – have adopted the tech-savvy, innovative ideas dreamed up by the 36-employee company. The firm is already dipping into a future growth area in the health care market – offering hospitality at hospitals.

“We have a lot of ideas on white boards,” Chief Experience Officer Marcus Robinson said. “It’s just a matter of time and an increase in staff at this point – and not losing focus on our primary suite while we are still growing.”

If you’re having trouble getting your barbeque brisket just right, it’s probably time to invest in one of Oklahoma’s best smokers: The $19,325 Cookshack FEC 750 from the Fast Eddy commercial line made in Ponca City.

The Whitt’s Barbecue chain in Nashville uses more than a dozen of them to cook nearly 10,000 pounds of pork most days. As a home user, though, you could opt for the Smokette Elite, but it only handles up to 25 pounds at a time.

Cookshack has been making premium-quality smokers and grills for more than five decades. Its annual sales this year will be close to $10 million – 15 percent of that in international markets, said CEO and President Stuart Powell.

Powell employs three smokers at his home for different types of meats, ranging from bacon to fish.

“Several years ago I was at a trade show in Germany and went to this small restaurant to have dinner,” Powell said. “They had some smoked items on their menu. I asked the waiter what they were smoking in, and he couldn’t really understand my English enough to figure out what I was talking about, so I gave him one of my business cards. About five minutes later the owner comes out and says, ‘Are you from Ponca City?’ I said yes, and he said, ‘That is where our smoker is from!’”