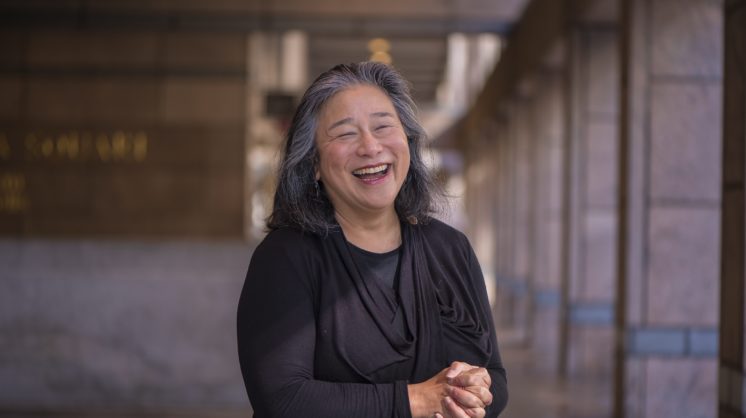 Tina Tchen, a Chicago-based attorney who served as assistant to President Obama, Executive Director of the White House Council on Women and Girls, and Chief of Staff to First Lady Michelle Obama, is the featured speaker at a dinner in Oklahoma City on October 1. Sponsored by Sally’s List, a nonprofit organization that trains women to run for political office, the event is the group’s principal fundraiser for the year.

In addition to sharing her life story, including her years in the White House and earning a living as a single mother, Tchen wants to encourage women to get involved by running for political office. “I was a single, working mother my whole career,” Tchen said. “As a lawyer, I had the means to afford school, child care and the other necessities of being a parent, and even for a person with means, it was still hard.” Both Tchen and Sally’s List operate from an understanding that when women get involved in the political process, issues affecting women—mothers or not—have a higher likelihood of being addressed, but more than just voting, Tchen, like Sally’s List, encourages women to become decision makers by getting into office. “We’ve seen that when women get into public office, these issues get addressed,” Tchen said. “In fact, issues related to women get addressed by women in office twice as frequently as they are addressed even by liberal men in office. Being in office is critical; decisions get made there. Sally’s List does the important work of helping facilitate that.”

According to Tchen, women don’t naturally see themselves running for office, whereas men are encouraged from a young age to see themselves as leaders. Some of the disconnect is related to simple, logistical issues: how do I run for office; how do I raise money; how do I give a speech? These and others are the issues Sally’s List helps potential candidates navigate.

After her time in the White House, Tchen was asked to serve as the chair of the National Academy of Recording Arts & Sciences task force on diversity and inclusion. The request came after the organization, which is responsible for the Grammy Awards, endured an embarrassing 2018 awards ceremony in which only ten percent of nominees were women, and very few women even appeared on stage. “When you look at pop culture, you see that it has a lot to do with how we think about our values, and how those values relate to policy,” Tchen said. “Think about the ways that pop culture has helped shape positive images for the LGBT community; it changed hearts and minds. Looking at the music industry as a whole, only three percent of engineers and producers are women. That is the place where decisions get made, much like directors in movies.”

A final report from the task force is due “soon” according to Tchen, but one thing that will definitely shape that report is the reality that women at a table change the conversation—they expand the range of topic as well as the perspective on those topics. “There is increasing social science research—some of which factored into Forbes magazine reporting—that shows more diverse teams make better and faster business decisions,” Tchen said. “For example, women at the table can tell a group of hotel executives that women make travel decisions based in part on safety, so where your hotel is located matters. Diverse backgrounds and perspectives in the discussion lead to better results.”

Finally, Tchen wants people to know that many women haven’t factored into conversations about policy simply because no one has asked them what they think. “And they’ve not been asked to run for office or present themselves as leaders either.” Tchen and Sally’s List hope to change that.