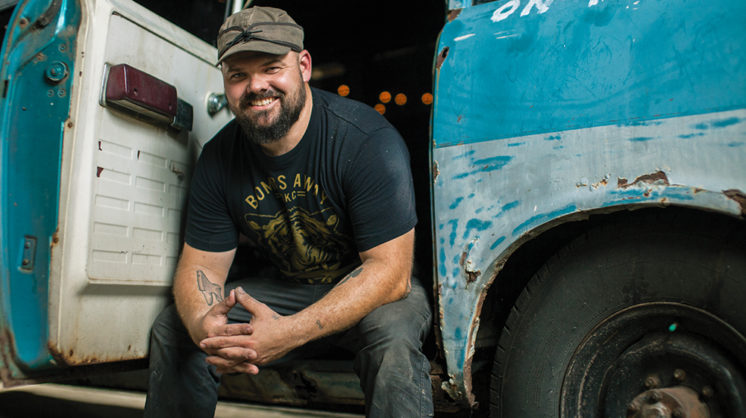 The first time Tony Westlund was on television, he was painting a dung beetle. Really, it was a Volkswagen Beetle on the Discovery Channel’s “Street Outlaws.” The car belonged to AZN (pronounced Asian), one of the show’s stars, who dubbed it the Dung Beetle. Westlund said that his career began to take a broader path with that on-air moment of creativity.

Westlund was born in Watonga, but most of his schooling was in Washington (the state), and that turned out to be critical to his success as an artist. Before the progressive state would nurture his creative side, though, he learned to love art with his paternal grandmother.

“We were in Washington because my father was a blacksmith and a farrier,” Westlund says. “We followed the economy, and he was able to do better in Washington. After school and during the summer, I’d sit at the dining room table with my grandmother, and she’d bring out oils and watercolors and just let me practice. She was the first person who saw my early talent.”

Where Westlund said he got really fortunate was middle school. Like many boys, he was fascinated with extreme imagery – fire, skulls, violence – and his teachers didn’t “freak out.” They encouraged his skills.

“I’m pretty sure most teachers these days would be calling in the school counselors,” Westlund smiles.

High school was more of the same, featuring supportive teachers and a freedom to choose electives that came from the non-college track. He also discovered his second love, in the form of analog photography. The school had a full darkroom, and (wait for it) a very encouraging teacher.

The trend of external support has been present in Westlund’s life as long as he can remember. When he talks about settling into Oklahoma City after a stint in Austin, he says, “I was not finding any struggle as an artist; I was following the yeses.”

The version of the story is his own, so it’s clear he believes it, but his definition of struggle is likely different than many people’s. For most of his early career, he was taking odd jobs, freelance work and working as a “tire slinger” at Hibdon’s while he tried to earn enough to function as a professional artist. That the son of a blacksmith who was a Marine vet would not see that narrative as suffering is not surprising, and it’s in fact quite refreshing; part of being a successful artist is treating art as a job, and Westlund has learned that through many different relationships. 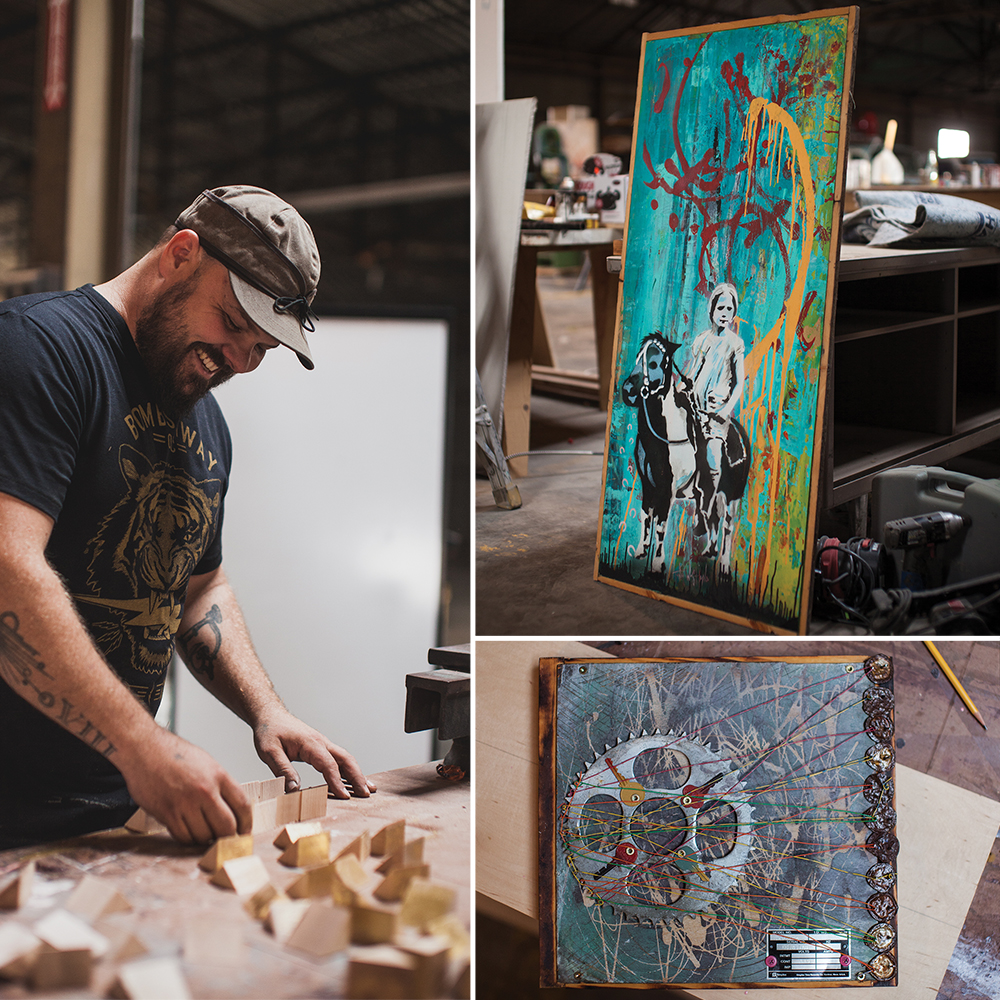 Central to his acquired business acumen is his relationship with his wife Claire and her family. Her father is a successful homebuilder and paint company owner, and Claire owns Revel Eight Salon in Midtown, as well as two other salons in the urban core. Westlund’s handiwork is all over her concepts, as well as in places such as The Womb and Cultivar, and it’s this ability to transpose a creative aesthetic to business applications that is his greatest asset.

That is partly related to his development as an artist, that blending of the organic with the industrial/mechanical. His sculptures are all a mixed-media blend of metal and wood, of machined parts and treated or untreated wood, of intentionally crafted pieces and found objects.

“My dad’s blacksmith shop equipment was all well-worn,” Westlund says, “and we lived in this beautiful farmhouse; it was lived in. I love the lived-in aesthetic.”

In fact, one of his specialties, which was a draw for the “Street Outlaws” crew, is his ability to take something new and make it look well worn. He uses it in the house accents he creates, including for his father-in-law’s homebuilding business, and even on new cars. He’s currently developing a line of faux aged wood furniture for Urban Farmhouse Designs.

That a man who considers himself a “scavenger” of society’s detritus now makes money off making new look old is certainly counterintuitive, and perhaps fully ironic. After reading The Scavenger’s Manifesto by Anneli Rufus and Kristan Lawson, his own philosophy of creativity came into sharper focus.

“There are animals that function as scavengers in nature, and they clean up the things no one wants; they make the world look better. They – rats, vultures, the scavenger animals – don’t look pleasant to us, but they are important. I like to think that I can see the hope in a broken chair. That I can take it and clean it up, fix it, make it beautiful.”

Tony and Claire had their first child, Wilder Cade, in 2017. He’s seven months old as of this writing, and Westlund said he expects his son to find his own muse. “I’m sure he’ll find a creative path; it’s in his blood. Creativity, ingenuity, inventiveness, business sense … both sides of his family have those things.”