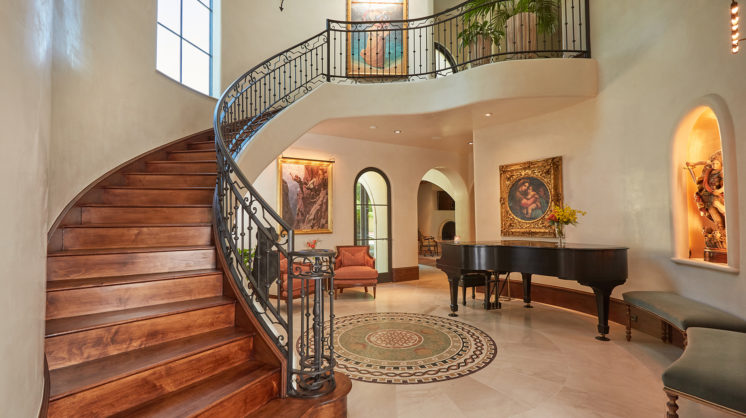 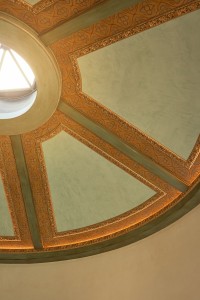 Touring Lisa Reagan Love’s home is a harmonious experience. The accomplished singer and songwriter lives with her husband Greg in a Spanish-Moorish style home in Nichols Hills, where music seems to flow freely from room to room.

The grand living room, which leads to a circular rotunda and winding staircase, is resoundingly operatic—majestic, dramatic, and old-world European. The recording studio, with its high-quality acoustics and a stately grand piano, recalls a gentle tinkling of keys, the creating and blending of melodies that occurs in this very room. The music carries outside, to the edge of the property, where a stone pathway leads to a small chapel. Smoky incense, glowing candles, and a carved wooden altar all surround a painting with instrument-bearing angels. This is Love’s sacred space for prayer, meditation, and chanting. Yes, music resides here, as well.

The home was completed in 2015 with archi- tectural elements drawn from the Loves’ travels to Santa Fe, along the California coast, and throughout western Europe. Architect Michael Mahaffey incorporated stately columns, tall turrets, curved walls, and arched windows and doorways into the design. High ceilings adorned in richly stained wooden beams and carved corbels make the home feel cozy, yet castle-like. Artist Angie Watson hand-painted woodwork throughout the home and added soft, gilded patterns to the top of the rotunda. 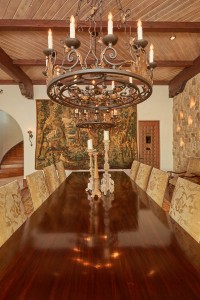 “I’ve always felt a connection with the old world, with Italy and Spain,” Lisa Reagan Love said. “When we built this house, everyone was like, ‘You should build contemporary.’ I love to go into contemporary homes, but it’s not who I am. If I’m going to live in it, it has to be who I am.”

Friends and fans will attest that Love is all about music. Before she could talk, Love expressed an interest in playing piano. “I went to the fair with my mom and family, and I crawled up to a piano and started playing,” Love said. “The woman selling the pianos said, ‘She’s your piano player. You need to get her lessons.’”

Love’s mother embraced the arts and encouraged her daughter’s interest and talent. What started as regular sessions with the church organist quickly grew into something bigger. At age 5, Love was reading and writing music notes and auditioning for Clarence Burg’s studio at Oklahoma City University. She got in. At age 15, she began studying voice with Florence Birdwell. In her adulthood, Love spent 20 years with the Washington National Opera, all while teaching university students and leading a children’s choir. In 2008, Love moved home for a voice faculty position with OCU, coming full circle in her musical journey.

“For me, music was always my friend—something that was an extension of my heart,” Love said, adding she loved to practice piano and make up songs. “No one ever had to ask me to practice.” 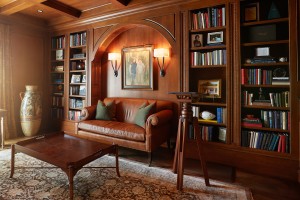 Naturally, music was considered when constructing the home, especially the recording studio. After many years of traveling to record albums, Love decided she wanted to be able to work and record at home. She consulted her longtime producer, co-writer, and collaborator, Paul Buono, in creating a studio space. He chimed in on the technical aspects—how to incorporate the necessary wiring and outlets in a not-so-obvious way—as well as the interiors. A built-in alcove proved the perfect spot for Buono to set up mixing and recording equipment, while the tall ceilings provide ideal acoustics. Big, heavy curtains that surround the window, where the piano lives, are both beautiful and functional.

“We will close the curtains to record a vocal, when she’s singing, for a more controlled sound,” Buono said.

“When I’m on that property, I feel like I’m in Spain, Italy, or Napa Valley; you don’t feel like you’re in the middle of America,” Buono said. He and Love often recall enchanting European scenes for musical inspiration. “Our music is international and worldly, so that’s important. We were working on the song ‘Barcelona Nights’ in her space, on her property, and we could—for all intents and purposes—have been in Spain.” 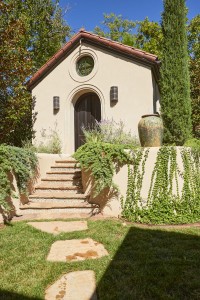 The mission-style chapel just outside the music studio is a peaceful retreat for Love to practice yoga, pray, chant, and write. An altar with a Hector Martinez portrait of the Virgin Mary, Jesus Christ, and angelic musicians is the focal point in the serene space.

“I can come in here and think,” Love said. “I can shut the door and get away. It feels really different. I like to write in a journal—little thoughts, little prayers. I’m somehow releasing it; asking for help, expressing gratitude.”

It’s fitting to have a chapel in Love’s backyard. She recently joined with Suzanne Jackson—a fellow Washington National Opera singer with a deep appreciation of yoga and chant—to form “Shunia.” The chanting duo released an album of the same name earlier this year. “Shunia” is the Sanskrit word for “still point,” as one may find in a quiet chapel, a structure serving a higher purpose. “I feel like things have a soul,” Love said. “Recently, in Italy, I was in the Uffizi Museum, looking at these paintings. You wouldn’t feel the same if that was just a print. There’s a soul. You can feel it, just being in Florence. The buildings, the architecture … Churches were made to inspire you to connect your heart to God.”

The Love home was built with such sentiments in mind.

“In this house, I tried to create a place that has old bones, then I brought in antiques—like Flemish tapestries that are 300 years old—that mean something to me,” Love said. “The classical training and loving classical music, living in that world almost my whole life, it’s just who I am. I don’t know why, but it speaks to me, musically and architecturally.” 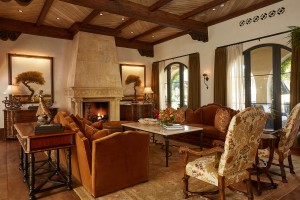 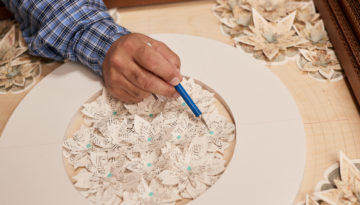 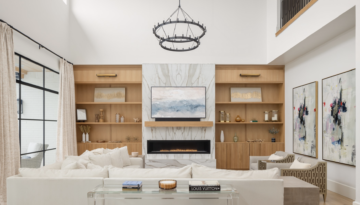