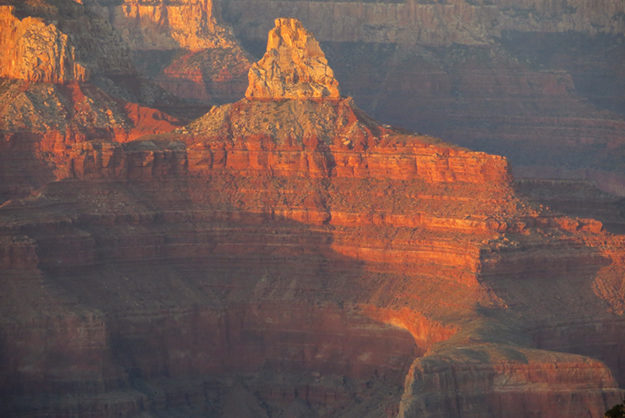 A Picture May be Worth a Thousand Words but No Photo, No Words, Can Really Prepare You For The Grand Canyon. Pictures can only give you tiny pieces of the landscape; adjectives quickly fail. The canyon is just – well – GRAND.

And BIG. The canyon sprawls for 277 miles. At its widest point, the canyon is 18 miles across. The creative Colorado River is a mile below.

Facts and figures are fine, but all that pales when you’re looking over the edge. Through the layers of rock, the history of the earth is revealed. Almost 40 distinct rock layers have been identified, from the lowest and oldest rocks (2 billion years) to the “young” (250 million years old) caprock. Different minerals in different layers paint a panoply of colors in the canyon.

The canyon itself is a relatively new creation, geologically speaking. The huge, flat Colorado Plateau was uplifted by tectonic forces between 30 and 70 million years ago. Between 5 and 6 million years ago, the Colorado River began its relentless work of carving out the canyon. Various forms of erosion and differences in the rock layers created a variety of outcroppings and columns.

Changing light creates a kaleidoscopically shifting pattern of color. The Grand Canyon is at once a photographer’s dream – and nightmare. Doing it justice with a camera is impossible – but millions of us keep on trying.

Not having a car is sometimes a daunting experience for those of us used to that luxury. Having a car at the Grand Canyon, however, is a nuisance – expensive and unnecessary.

Regular shuttle buses stop at all park facilities and make runs along the canyon rim with stops at the most scenic lookouts. We rarely had to wait long for a bus.

Xanterra, the park partner that operates a number of the concessions, including lodging, also offers specialized bus tours, including sunrise and sunset outings. Our sunrise tour driver, Gina Valdez, was a fount of information and we arrived at a premier point for catching the first rays 10 minutes before the 5:43 a.m. sun. There were no clouds that morning – nothing in the sky to catch the color – so it was a very matter-of-fact, now-you-see-it kind of a sunrise. But, oh, what it did as the rays illuminated the canyon walls. Shades of gray were transformed into a brilliant celebration of yellows, reds and purples.

Don’t even consider a visit to the Grand Canyon a day trip. Lots of people do and they really miss a lot. Our trip was a short one, but we hit a lot of high spots. We spent the night before at the Grand Canyon Railway Hotel by the train depot and got up early the next morning to catch the train from Williams to the Grand Canyon. The hotel and the train are Xanterra entities and they made it extremely easy.

The train was scheduled to depart at 9:30 a.m. but early-comers are treated to a cowboy show before going aboard. The emphasis was on comedy with clever routines with horses, the hero marshal and inept bad guys.

We arrived at the Canyon Depot at 11:45 a.m. and couldn’t wait to climb the hill to historic El Tovar Lodge and our first view of the canyon. Many people who take the train ride back the same day – leaving at 3:30 p.m. The canyon they see is beautiful, but with the sun high overhead, the colors are flat and washed out.

We were anxious to start our explorations, but grabbed a quick bite in the food court at Maswik Lodge, headquarters for our accommodations. The rest of the day, we shuttled from one amazing view to another. When we first arrived, we made dinner reservations at the El Tovar dining room, the park’s gourmet eatery. During dinner I ran out to the canyon’s edge between my entrée and dessert to catch the Technicolor sunset.

The next day we explored more of the canyon’s rim. We didn’t have time to go down into the canyon – plan a lot more time if that’s something you want to do. There are mule trips and, of course, hiking into the canyon and on the rim. Bikes are available for rent and raft trips are scheduled both inside and outside the park. Several companies offer helicopter tours of the canyon.

Sated with scenic overload, we relaxed on the train back to Williams. The landscape on the 65-mile trip is not spectacular – though it is forested near the canyon, most of the way was flat and relatively treeless. Not much to look at out the windows … until we spotted masked men on horseback racing along beside the train.

The train ground to a halt. Train robbers! We all kept our jewelry and our virtue, though tipping was encouraged. It was a cute coda to a grand Grand Canyon getaway.

Check out packages that include train fare, lodging and other amenities at www.thetrain.com

• We picked up a rental car and drove to Williams, about a two-and-a-half hour drive. It can be done in a day, but there’s a lot to see in between the two towns.

• Almost 5 million people visit the canyon annually. Summer is peak – and hot – so consider going in spring or fall.

• Take refillable water bottles – no bottled water is sold in the park.

• The park offers a variety of lodging. If you want a room with a canyon view, check out Thunderbird and Kachina lodges.

nps.gov/grca is the go-to site for all info about the national park.