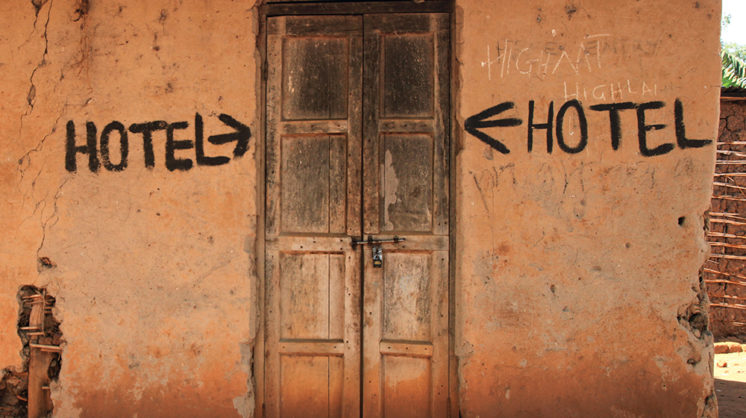 We’re barely out of the first quarter of 2018, but I think it’s safe to declare that the word of the year is the very un-presidential … well, let’s summon a smidge more class and say “shiphole.”

I also think it’s safe to say that the places I would describe with that uncensored term are vastly more authentic than those our president labels as such. Coincidentally, the president would scarcely have to venture far from his Manhattan apartment to be up close and personal with the ones on my list; most of them are in New York City, a city that I truly love, despite its many unsavory peccadilloes.

Topping my list, the crown jewel of feculence is the Milford Plaza Hotel, which had the pleasure of opening its sprung, rusted doors for my bestie and me a few years ago. A steal on hotels.com (where the Trump hotel was conspicuously absent), this was the undisputed poster child of dumps.

After the preliminaries of, “I’m so sorry, I can’t find your reservation on our new system,” we were eventually directed to the one working elevator that would take us to our luxury double room, which translated loosely as a pair of twin beds – already slept in – in the room the construction workers had been using to relieve themselves (read: toilet lid UP; bad aim, all of them), as well as for smoke breaks and mid-day siestas. The door required no card key, as it had been propped ajar by the construction-grade power cord that operated a jackhammer during non-siesta hours.

Relocating to another room was as straightforward as calling the front desk, being redirected to the assistant manager, and subsequently referred back to hotels.com, where the reservation originated. An hour later, we were escorted to a nicotine-saturated room that rivaled the construction workers’ lounge. Two minutes after that, we were re-relocated to a room whose nicotine saturation was only eclipsed by black mold. “All the rooms are like this,” our demurring bellhop assured us.

We moved on to the business of the day. Having recently lost an authentic Louis Vuitton demi-lune cosmetic bag, lifted from my suitcase by O’Hare’s sketchy TSA staff, I was determined to find its counterfeit replacement in Chinatown. My bestie had the name of a personal driver/accessories vendor, Lama, who would be our hookup for the merchandise we needed. Lama drove a 1986 Dodge Caravan with no backseats, which left more cargo area for counterfeit bags, wallets and, hopefully, demi-lune cosmetic pouches.

There was no demi-lune pouch to be found among Lama’s heap of “leather alternative” merchandise, so he graciously agreed to take us to Chinatown. We were quickly welcomed to the back rooms of several boutiques – shipholes, all of them, and none of which offered the demi-lune.

Scrolling through his cell’s lengthy contacts list, Lama honed in on a sure bet: not a boutique, but another disaster of a van in a back alley, stuffed with counterfeit inventory … exactly the setting I would warn my daughter never to go near.

Unable to unearth a demi-lune from the van’s stacks of designer knockoffs, I repeatedly refused the succession of stand-ins offered to me by the workers in the van. They eventually screamed at me in frustration, unsubtly suggesting that I was nothing more than an irksome tire-kicker. I was hurried out by a man whose forearms were covered in watches of all kinds.