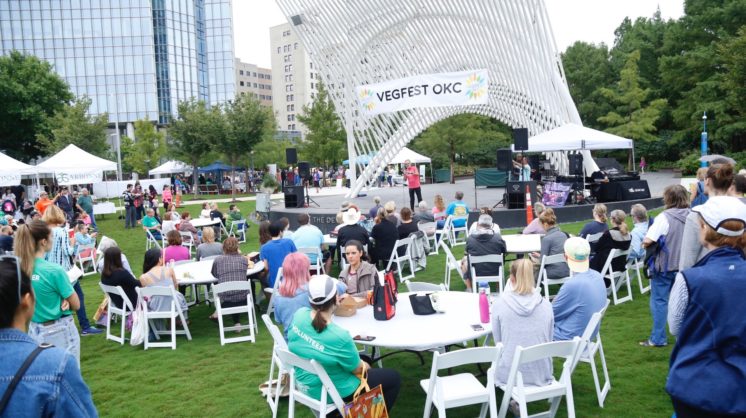 The second annual VegFest OKC is Sep. 7 at the Myriad Gardens, an encore of the event that brings together vendors, speakers, food trucks and group fitness sessions to promote a healthy lifestyle via plant-based diets.

Prior to last year’s inaugural gathering, the organizers were forced to come up with a prediction for the number of expected attendees.

"We were doing all these media interviews – TV and radio – about VegFest, and the interviewers kept asking us how many we expected,” says Donna Brogan, who does media relations as part of the organizing team. “I just made up a number: 2,500. How do you predict attendance at a first-time event? I felt guilty about it until we got the actual count: 4,500.”

As a result of those unexpectedly large numbers, VegFest has been expanded this year with more vendors, more classes and more space, as well as a designated children’s area; the central staging ground is still the Great Lawn. Nine food trucks will be at the event – including Anthem Brewing Company, which brewed vegan saison called Medium Rare for the first festival, and has made another for this year.

“A few of our food vendors had their best day of the year last year,” Brogan says. “Plato’s Provisions ran out of food, and Just Desserts sold through everything they had.”

Some well-known names will be among the 70-plus vendors, including Emma Ryan (chef, owner of Plant and nutrition coach), Green Goodies, Stone Sisters Pizza, Red Cup and Wheeze the Juice. Vendors run the spectrum from chiropractors to makeup to Commonplace Bookstore.

Fitness classes will be held every hour this year at one of VegFest’s two stages. Between guest speakers, a DJ will occupy the main stage. Keynote speakers this year include two metro physicians: orthopedist Dr. Jimmy Conway and cardiologist Dr. Dwayne Schmidt. Both will talk about physical health and a plant-based diet. Callum Ross, the Energy FC’s midfielder (and a vegan) will talk about living as a vegan and professional athlete, as will Daniel Austin, a powerlifter who wrote The Way of the Vegan Meathead.

In keeping with their commitment to help and not harm animals, the festival will also have an adoption area on the small lawn northeast of the band shell. Oliver & Friends and Pinkerton Haven, both sanctuary farms, will have animals for adoption on site.

VegFest OKC runs 9 a.m.-5 p.m., and as Brogan points out, the OU game doesn’t start until 6 p.m., so there’s plenty of time to do both. Admission to the event is free and open to the public. For anyone using the OKC Streetcar, the platforms are located just west of the gardens on Hudson Avenue.