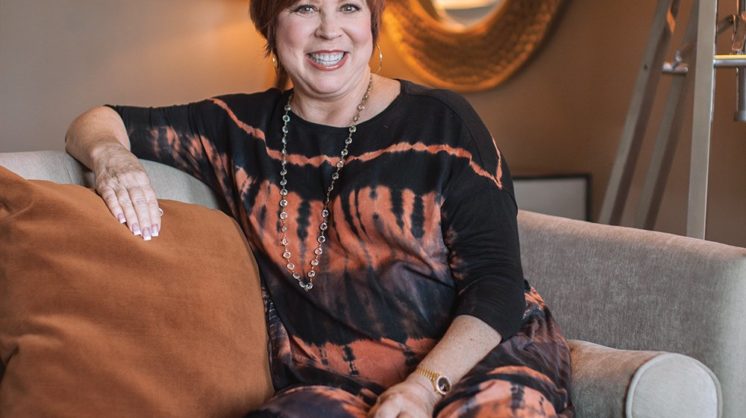 It was 50 years ago in 1967 that Vicki Lawrence wrote a fan letter to Carol Burnett, telling the famous comic that friends had noticed a resemblance between the two women. Lawrence was competing in the “Miss Fireball of Inglewood” contest, and Burnett showed up to see for herself whether there was any likeness.

Bingo. Burnett liked what she saw and signed Lawrence as a regular on her eponymous new variety show, set to premiere that fall on CBS. In the years since, Lawrence performed on the entire 11-year run of the legendary “Carol Burnett Show,” starred in her own sitcom “Mama’s Family,” spinning off her famous character, and even recorded a No. 1 record. Half a century later, Lawrence accepts the title of “Hollywood Royalty” with a gracious smile. She was in Oklahoma City recently as part of a nationwide medical tour, bringing attention to a little-known condition from which she suffers – it’s called chronic idiopathic urticaria (CIU), more commonly known as chronic hives.

“I woke up one morning about seven years ago with my palms itching, so I told my husband to go buy a lottery ticket,” Lawrence says with a laugh. “A little while later, I was walking the dogs and began itching all over. By the time I got home, I had welts all over my body.”

Lawrence went to her doctor, who said almost everyone breaks out in hives at some point in their lives. But after six weeks and dozens of treatments, the hives would not go away.

“That’s when he diagnosed me with CIU,” she says. “I began searching the internet, but didn’t find much about it. Luckily, my doctor got my hives under control. Fast forward – I joined this program [called] ‘CIU and You,’ which is supported by the Asthma and Allergy Foundation of America along with Novartis Pharmaceuticals and Genentech. It’s sort of an educational program for people with this condition, and there’s a lot of information we provide. Bottom line, I’ve become the poster child for hives.”

“I’m trying to get the word out to people that if you have this, you’re not alone,” she says. “You haven’t lost it; you’re not going nuts. It’s a real thing. I’ve now had an opportunity to talk to others with this condition, and they’re just as surprised at this as I am. And honestly, so are a lot of doctors.”

Fortunately, Lawrence says her hives are under control, so she can continue her work on and off screen. She regularly tours with “Vicki Lawrence and Mama: A Two Woman Show,” in which she resurrects the loveable Mama Harper character she made famous so many years ago.

“I was only 24 when I first did Mama on the old Burnett show,” Lawrence remembers. “That’s over 40 years ago, and Mama has never aged.”

“I’m trying to get the word out to people that if you have this, you’re not alone. You haven’t lost it; you’re not going nuts.
It’s a real thing.”

Lawrence graduated from high school in 1967, the year of the Summer of Love. She said she was into dance and music, and never identified with the hippie or flower child lifestyle that was so prevalent then.

“I was a good girl,” she says. “I was into cheerleading, and I loved music. My favorite song that year was ‘Ode to Billie Joe’ and I remember playing that on the hi-fi so many times and my mom yelling, ‘Turn that record off, you’re driving me crazy!’ Then when we had Bobbie Gentry on the Burnett show, I totally freaked out. I remember she was late for rehearsal and someone called the front gate and asked if Bobbie Gentry had come through yet. The security guard said, ‘I haven’t seen him.’ They didn’t even know who she was! But I did!”

A few years later, Lawrence had a hit single herself, which earned her a gold record in 1973. “My first husband had written this song called ‘The Night the Lights Went out in Georgia,’” she recalls. “He wrote it thinking it would be a great song for Cher, but Sonny said, ‘Absolutely not! That would offend the entire southern part of the country.’”

When Cher passed on the record, Lawrence went into the studio and cut it herself. It immediately hit No. 1, and was covered in the 1990s by Reba McEntire.

“During my ‘Vicki and Mama’ show, I always do that song,” Lawrence smiles. “I call it “a medley of my hit.”

Her schedule keeps her busy, Lawrence said, both performing and spreading the word about CIU. But when she can, she keeps up with her former co-stars. “Someone asked me if we would ever do a ‘Mama’s Family’ reunion, maybe something like Eunice and Mama in assisted living,” she chuckles. “There’s been talk of a reboot on Netflix, but nothing definite.”

What does she think Mama Harper would say about today’s political climate? “I think she’d stay the hell out of that conversation,” Lawrence says as she slips into Mama’s distinctive drawl. “But I do think she’d tell the President to get a decent hairstyle and get that raccoon off his head.”

Touring the country gives Lawrence a chance to see the landscape of America, and she’s been to Oklahoma City several times. “Oklahoma City is so beautiful,” she says. “And it’s grown so much. I will say you have more earthquakes here now than we have in California. But the Bombing Memorial is spectacular; very moving. And the last time we were here, you had just gotten the NBA team, the Thunder. My husband said that was one of the best things that could happen to Oklahoma. It’s always a pleasure when I get to visit here. You Oklahomans are the best!”