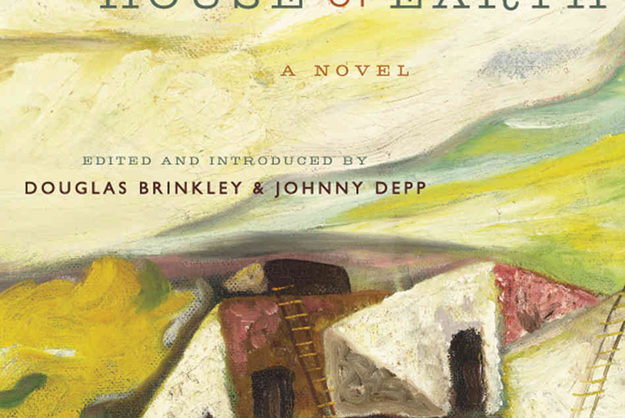 It is a new release, but not a new work, and while it is its author’s only novel and is just now in print decades after his death, chances are you’ve heard of him: after all, most Oklahomans know the name Woody Guthrie. The legendary musician completed “House of Earth” in 1947, though it was never published – likely due to the combination of its frank sexual content and bitter contempt for oppressive plutocrats, a mindset that would have been viewed as uncomfortably Communist at the time.

It’s a tale of two sharecroppers, a brutally poor couple who dream not of wealth nor fame but of building a sturdier adobe home … but since the land on which they live and in which they toil is not their own, they are forbidden from making a better life for themselves.

If that sounds like a story the Dust Bowl Troubadour would tell, historian and author Douglas Brinkley agrees. “Woody Guthrie has something that every artist would die for: a voice,” says Brinkley. “You can read ‘House of Earth’ and you know it’s Woody Guthrie. You know it’s coming from the heart.”

That it is in print at all is a marvel; Brinkley tracked down the manuscript in a box at the University of Tulsa library and published it with help from his partner, Johnny Depp. After more than half a century in obscurity, Woody Guthrie’s “House of Earth” is available now at Amazon and stores nationwide.

Picasso famously opined that “good artists borrow; great artists steal,” so an event built around copyright infringement has potential, right? Southern Oaks Library is hosting its 2013 fan fiction and fan art contest, in which entrants tell their own stories using copyrighted characters – and since it’s not for profit, the sky’s the limit. So if you’ve been working on an epic about the TARDIS landing aboard the Enterprise, or Bella choosing Team Wolverine, or all of them teaming up to destroy the One Ring, get the details by calling the library at 631.4468 before the March 17 entry deadline.