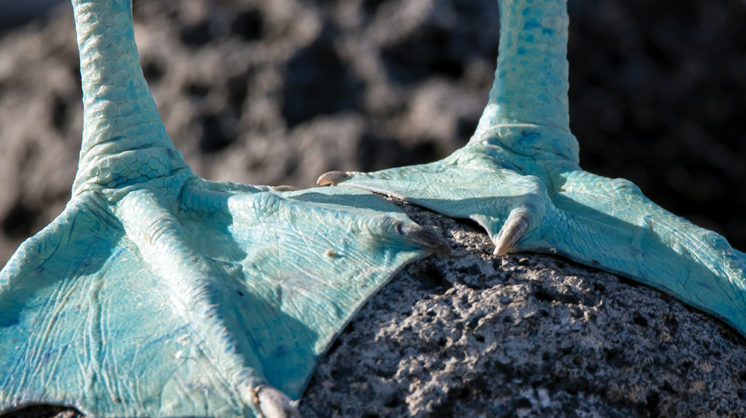 Mosquera Beach is a pristine, narrow stretch of white powder sand just off the island of Baltra in the Galapagos Islands. At its narrowest point, it is 90 yards across and at its widest, nearly a quarter of a mile. Like many islands in the Galapagos, it is home to a colony of sea lions. Bright red crabs adorably known as “Sally Lightfoots” scamper in and out of the surf as it washes over black lava rock, and blue-footed boobies patrol the waters just offshore, occasionally plummeting at breakneck speeds into schools of fish just below the water’s surface.

It is a scene not uncommon in the Galapagos. However, unlike most islands in the heavily protected National Park and Marine Reserve 600 miles off the coast of Ecuador, visitors on Mosquera can explore the remote beach at their own leisure without a guide, allowing a rare moment of pure “on land” contemplation and surrender amid a whirlwind of mind-bending wildlife encounters and arresting natural beauty both above water and below.

The Galapagos Islands leave much to ponder. Try and wrap your head around two tortoises, as slow as flowing superglue and slightly smaller than a Mazda Miata, with a combined age of the United States, engaged in an impassioned fight over a mating opportunity; or swimming behind a 10-foot hammerhead shark, only to run into a wall of giant stingrays stacked so high that the lowest levels disappear into the impossible blue of the Pacific. Or perhaps a chance encounter with a school of a hundred thousand sardines, split by a lone pint-sized Galapagos Penguin (the only penguin in the northern hemisphere) looking for breakfast.

Whether Great Frigatebirds with their giant red, inflated gular sacs or marine iguanas drying themselves on lava rocks, the wildlife of the Galapagos is just that: wild. And unlike the rest of the world, where animals scamper, or in some cases charge, at the sight of humans, this wildlife pays no mind to the slack-jawed homo sapiens invading their personal space. Rather, life goes on in the Galapagos as if humans didn’t even exist. 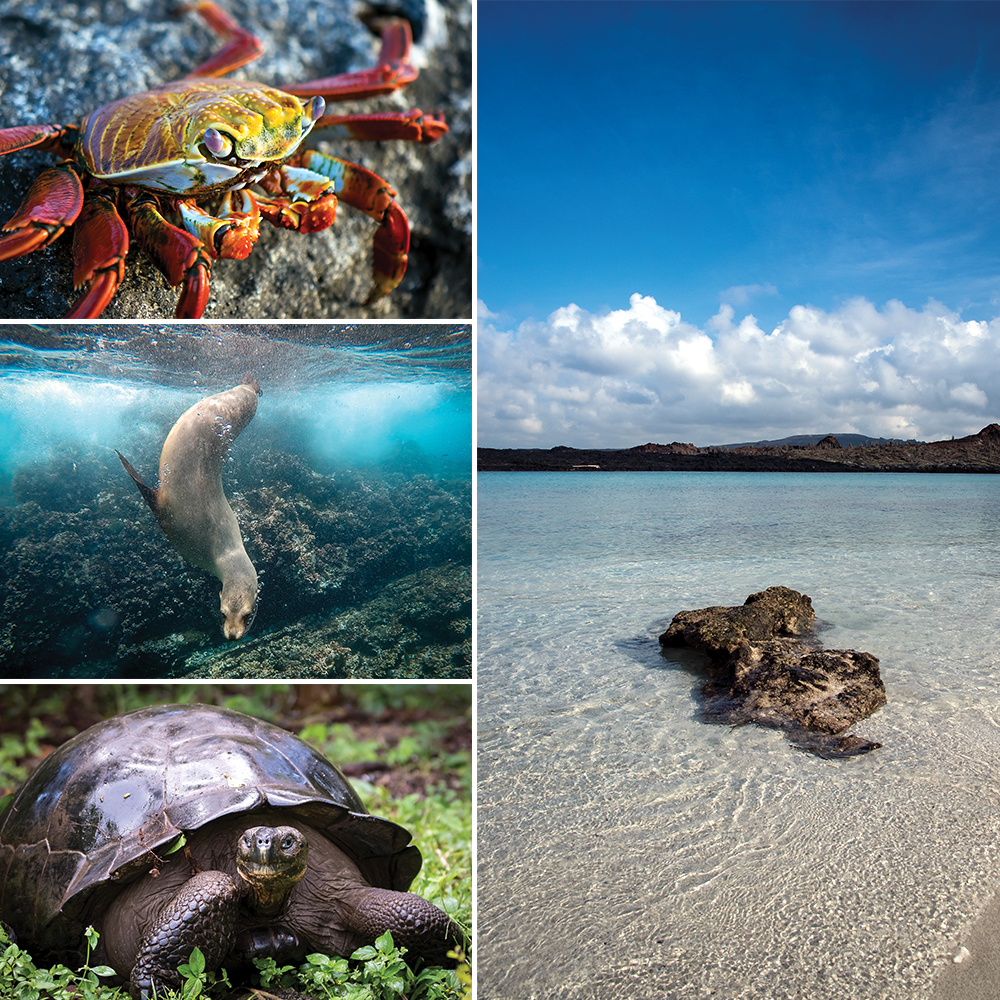 The Galapagos Islands, situated on either side of the equator (you will likely cross it when you visit), are a volcanic archipelago consisting of six main islands – Isabella, Cristobal, Santa Cruz, Floreana, Santiago and Fernandina – as well as 12 smaller islands, 42 islets and countless small rock formations. First established as a National Park in 1959, the Galapagos is one of the most protected and heavily restricted regions in the world. To preserve the island’s wildlife, which helped inspire Darwin’s theory of evolution, fewer than 80,000 visitors go to the islands annually. That’s a far cry from the millions who visit the likes of Yellowstone, Yosemite and the Grand Canyon in the States.

The islands, which can only be visited by boat and experienced with a certified local guide, are closely monitored, and guests are meticulously screened before arriving and departing to ensure nothing illicit is brought in or out. Furthermore, every two weeks, the locations in the islands that visitors can explore change, allowing the wildlife to readapt to life without humans – thus ensuring that it stays as true to its natural essence as possible. And while that seems like a lot of rules and regulations for a vacation, these efforts to minimize human influence are greatly rewarded.

There is no better way to experience the islands than with International Expeditions. The Alabama-based company has long been a pioneer in the world of eco-tourism, and their trips are not limited to the Galapagos; with a range of small ship and land tours spanning from Antarctica and Cuba to Alaska and Costa Rica, International Expeditions provides the highest accredited guides and also only hires locals, ensuring as much of an immersion into the area’s culture and local villages as its surrounding natural wonders.

There are two primary forms of exploration in visiting the Galapagos: above the water and below. The climate is warm, so mornings (when it is cool) are spent traversing the islands. Arid and covered with multiple species of brush and cacti, each offers a different variety of animal species. Guides lead the easy hikes pointing out hard-to-spot wildlife, identifying dozens of species of birds and articulating the subtle differences from island to island that influenced Darwin and his theory of evolution. 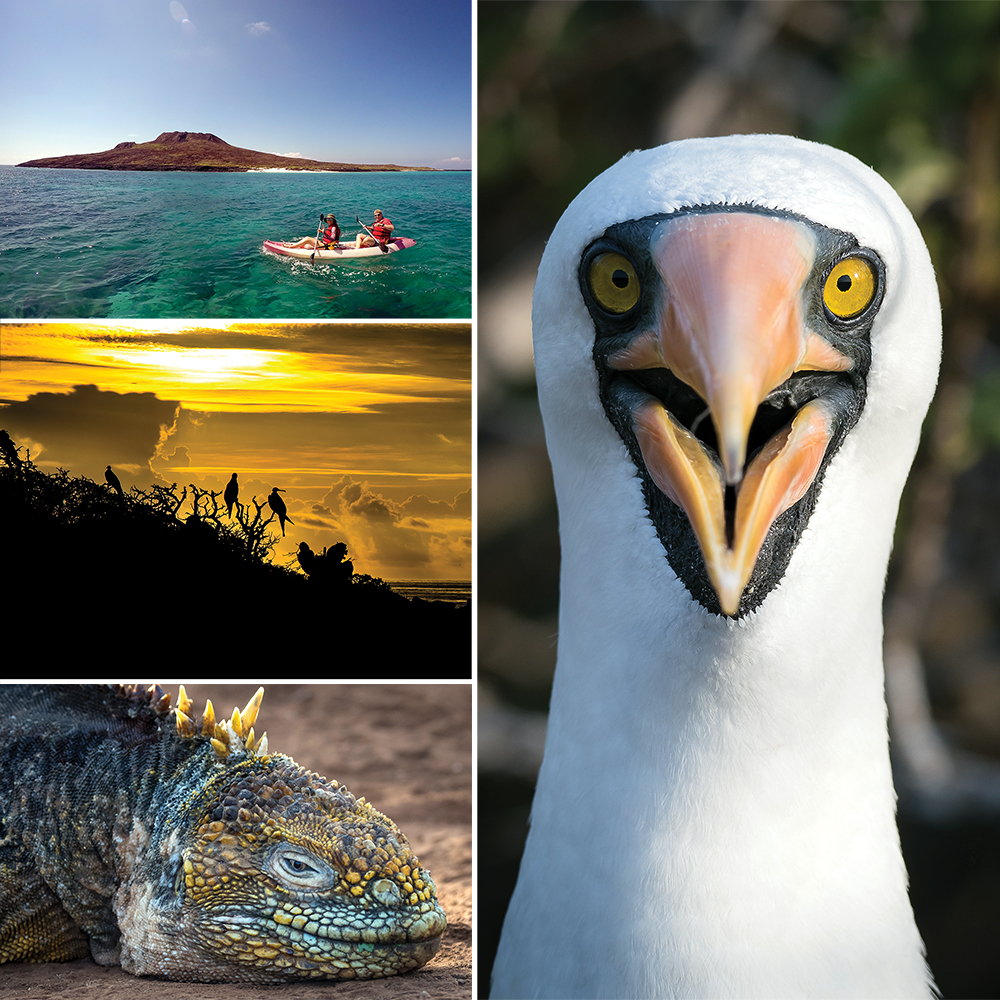 Afternoons are spent either in transit to a new island or in the ocean. Whether exploring the edge of a water-filled caldera by kayak or snorkeling with sharks, sea lions and sea turtles, the warm waters of the Galapagos are as varying and inspiring as any in the world. There is a third natural component, as well, for those not too tired from the day’s activities. Given that there are fewer than 30,000 residents in the Galapagos – which cover more than 3,000 square miles – there is no light pollution, so experiencing the belt of the Milky Way, particularly on a new moon, is akin to floating in space.

It was a sad, strange thing to encounter the bones of a beached whale. How long must it have lain there under the sun before slowly turning into part of the primordial landscape? Of course, somewhere else, residents might have taken the dead whale away … but death is as much a part of the natural way of the Galapagos Islands as the wildlife. From a lava rock not far away, a marine iguana, still wet from a day grazing on sea grass under the water, makes his way toward the skeleton of the whale and scampers to the high point of the whale’s skull, trying to get as close to the setting sun as it can. It is triumphant. Off in the distance, a baby seal emerges from the water, joining its parents on the beach as the daylight softens, making way for the heavens. Our time on Mosquera is up. We make our way back to the boat for dinner. After dinner, we will head to the bridge to watch the stars as we set sail, leaving beautiful Mosquera in our wake … as though we never existed.