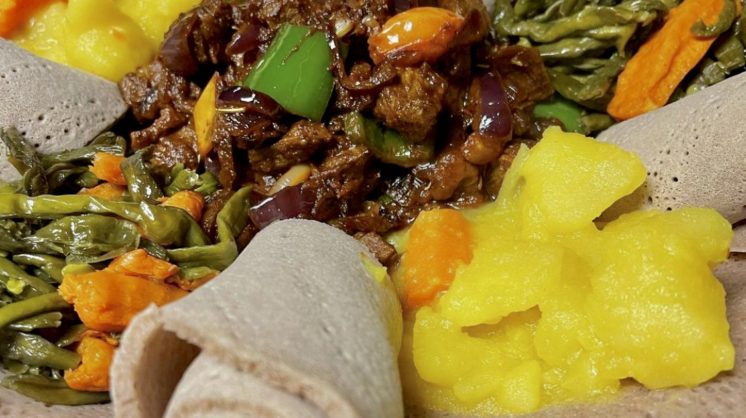 Photo from Queen of Sheba.

When we talk about the west side of the metro, we tend to think in terms of Mustang and Yukon, but there’s an amazing diversity of food between Portland and Rockwell and from NW 10th to NW Expressway. In terms of food, it’s one of the most diverse areas in the 405, including regional cuisine from Mexico, Central America, the Middle East and West Africa, among others. Here are 10 West Side Restaurants to Try Now.

Feria Latina is a supermarket, but there is a restaurant inside that makes what are likely the best pupusas in the metro. The full menu includes dishes from Mexico and Central America, and it changes regularly. You’ll find delicious soups, excellent tacos and tortas and many things you’ve never heard of but should try.

King’s Custom Smoked Meats. The old-school barbecue joint has plenty of traditional options like brisket, burnt ends and pulled pork, but they also do an excellent job with bologna, jalapeño-cheddar sausages, and catfish. The menu is diverse enough that you’ll find something for nearly everyone.

La Huasteca. This west side C store is a welcome addition to the Mexican cuisine scene, and not just because they serve birria ramen — you read that right. The traditional tacos are excellent as well, including barbacoa, deshebrada, lengua and others. The tortas and taquitos are delicious as well.

Ok Si! If you’ve not had pollo asado al carbón, stop reading and head to this drive-thru joint on NW 10th that sells grilled chicken starting at a quarter bird and working up to whole birds. They’re served with grilled onions and peppers, fresh tortillas and delicious salsa. It’s not as well known in the metro as other Mexican specialties, but it should be.

Queen of Sheba has managed to outlast many other African restaurants in Oklahoma City, largely on the strength of their outstanding food and because they’re a destination for vegetarians who want intense flavors. The injera is everything you want from a sourdough, and the tibbs and watt dishes are phenomenal, with the yebeg kay watt (a lamb dish) as the standout.

Taqueria Rodriguez has the best quesabirria tacos in the city. It’s impossible to describe how delicious they are. You’ll find the truck on the northeast corner of NW 10th and Portland, and you should make a point of trying the tacos. Yes, they have a wider menu, which is excellent, but the quesabirria tacos are special.

Taqueria Sanchez. Most locals know about the blue taco truck on NW 10th. For many, it’s their introduction to traditional street tacos, and it doesn’t hurt that the prices are ridiculously affordable. The tacos are what you’d expect from a truck that’s been operating successfully for many years, and they have outstanding mulitas as well.

Tierra Mia Nicaraguan Latin Grill. It’s rare to find a place that is as good at breakfast as they are at dinner, but this family-owned eatery offers fantastic traditional Nicaraguan breakfast and stellar dinner items, especially the bistec encebollado and pollo con achiote.

Travel by Taste. Very few things qualify as a hidden gem; mostly in the digital age, things aren’t that hard to find, but this Persian restaurant remains relatively unknown around much of OKC. Many of the traditional dishes are familiar — dolmas, hummus, and kabobs — but take a deep dive into Persian specialties like Gheimeh with potatoes or Ghormeh Sabz.

Zamzam Mediterranean Grill. They achieved their popularity initially as a hookah bar, but the food is the real star. The kabobs are delicious, as are the kibbeh and kufta, but be sure to try the foul mudammas, a chickpea and fava bean dip that you’ll want on the table for all your parties.