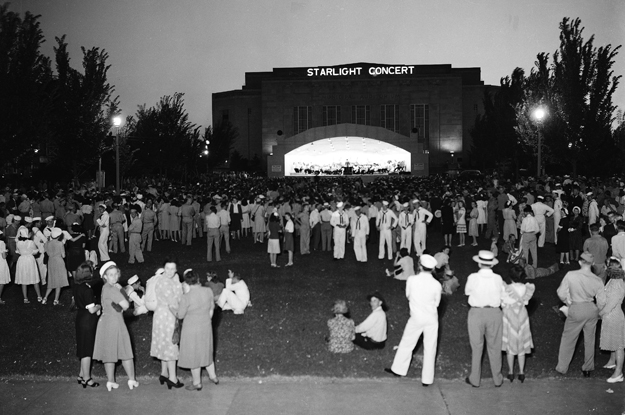 In the depths of America’s Great Depression, President Franklin Roosevelt put forth his New Deal, a plan to not only help the country get back to work, but improve its infrastructure. The Works Progress Administration (WPA) constructed roads and bridges and buildings across the nation, and its projects have come to symbolize the enduring nature of American perseverance and ingenuity.

In downtown Oklahoma City, the WPA constructed a building first known as the Municipal Auditorium. With a blend of neoclassical and Art Deco architecture, it became the city’s primary performing arts venue. Later renamed Civic Center Music Hall, it became the cornerstone of the city’s landmark MAPS program in 1999 with extensive renovations and a new public/private partnership between the city and the Civic Center Foundation. Now, the stately hall has stood for three-quarters of a century as testament to what America and Oklahoma can do.
That is a fine reason for a spectacular party.

The Civic Center Music Hall’s 75th birthday celebration takes place on September 27, and it will serve not only as a celebration, but as a benefit as well, to continue making improvements to Oklahoma City’s great hall.

“This will be an absolutely festive event,” says co-chair Judy Love.

Indeed, the first half of the evening, presented in the style of a radio broadcast, will pay tribute to some of the many stars who have performed at the Civic Center during its tenure – artists such as Elvis Presley and James Brown. This first act will include participation from each of the resident nonprofit arts agencies who call the Civic Center home: Oklahoma City Ballet, Oklahoma City Philharmonic, Lyric Theater, Canterbury Choral Society, Oklahoma City Repertory Theater and Oklahoma City Theater Company.

After intermission, Frankie Valli and the Four Seasons will take the stage with the Philharmonic. Valli rocketed to fame half a century ago, known for such hits as “Big Girls Don’t Cry” and “Walk Like a Man.” With the success of the play “Jersey Boys,” interest in Valli’s music has surged and his current tour has seen packed houses from coast to coast.

Sponsorships for the gala have already raised more than $739,000 toward the Civic Center Foundation’s mission of providing continuing improvements and development of the hall. (See “Better and Better.”) Presenting sponsor for the celebration is the Chickasaw Nation, followed by Diamond sponsors Devon Energy and the Oklahoma Publishing Company. Emerald sponsors include Love’s Travel Stops and Country Stores, The Gaylord Foundation, Herman and LaDonna Meinders, St. Anthony Hospital and Chesapeake Energy.

Tickets for the general public are now on sale for the bargain price of $75 through the Civic Center Box Office at 297.2264.

The Civic Center Music Hall has stood through time, providing a focal point for performances in Oklahoma City. But perhaps more importantly, it has provided a place for multiple generations of Oklahomans to experience the arts.

“I love taking my grandchildren for their first time to experience something new,” says event co-chair Ann Johnstone. “I’ve seen so many wonderful things at the Civic Center, but I think that is the greatest joy of all.”

The partnership between the Civic Center Foundation and City of Oklahoma City has resulted in a treasure trove of improvements to the hall.