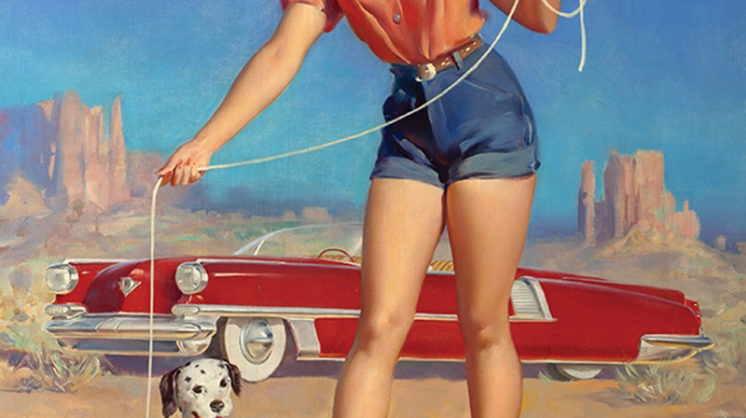 Dames of the Plains

Westward expansion of the United States was a risky, hardscrabble, rough-and-tumble process that was a grueling test of men’s determination and drive – but they couldn’t have done it without the women of the West. More than 100 works portraying females from the 1850s forward fill “Madonnas of the Prairie: Depictions of Women in the American West.”

In the season of romance, chocolate aficionados have the sweetest love affair of all – the annual marvel Chocolate Decadence is returning to Automobile Alley, combining a gala atmosphere with smooth jazz, freely flowing champagne and gourmet samples of dark brown bliss from 20 local restaurants and sponsors. Savor it, and don’t forget the scrumptious Valentine auction.

There’s a kind of physical poetry in the expertly choreographed artistry the Harlem Globetrotters bring to the court … plus they’re just a blast to watch. The dazzling trick shots, precision passing, world-class athleticism and crowd-delighting comedic antics make a complete all-ages entertainment package. There’s no guarantee the Globetrotters will best the Washington Generals, but a good time is definitely waiting.

The Montagues and Capulets are present, bilious and bellicose as ever, but the real story of this version of “Romeo and Juliet” is the transcendent beauty of its amorous dance. The OKC Ballet’s tale of the star-crossed lovers is a world premiere arrangement, buoyed by lavish sets and costumes and the OKC Philharmonic’s live performance of the Prokofiev score. Happy Valentine’s!

A Spot of Elegance

Young ladies from central Oklahoma probably aren’t likely to be listed in Debrett’s Peerage … though on this day they can feel as though they are. Make reservations to savor a spot of haute tea with the proper tastes to accompany it, live chamber music, living history performers and a souvenir to take home at the EHS’s rather thoroughly enjoyable Victorian Tea.

When the OKC Philharmonic plays a piece from a film in the course of its Pops series, the fidelity is so fantastic fans can close their eyes and see the scene in question. Except that in this case, they won’t have to. “Pixar in Concert” includes visual accompaniment from clips presented in widescreen HD as the orchestra soars through songs from “Toy Story,” “The Incredibles,” “Finding Nemo” and 10 other animated classics.

The Pulse of Life

At its core, the Heart Ball is a means to support the lifesaving mission of the American Heart Association by funding research and encouraging healthier lifestyles. But reducing it to that bottom line omits the joyous fun of the event itself, a black-tie delight boasting dinner, dancing, outstanding auctions, the presentation of the Sweethearts and a thoroughly memorable gala experience.

What Dreams May Come

In a better world, we’d never have needed Dr. Martin Luther King, Jr.’s inspirational example in the first place. In this one, we’re still grappling with making his plea for racial harmony into reality. CityRep and Guthrie’s Pollard Theatre partner to present an electrifying tale of the icon’s last night on earth, during which he is confronted with an unexpected visitor and difficult choices, in “The Mountaintop.”

You’ll want to dust off your best crime-solving finery for this very special evening featuring dinner … and death. ICU patients aren’t the only characters whose lives are at risk in “Hospital Homicide,” the Sooner Theatre’s annual installment of musical murder mystery entertainment. Enjoy the songs and silliness, but pay attention: you might crack the case, while supporting the landmark theatre’s performance slate.

He’s a polished songwriter and dazzling performer – guitar, drums, vocals, keyboards, marimba … he could probably drop a mean theremin solo if needed – who relishes live appearances as an opportunity to push himself creatively and dig deeply into his massive catalog of originals and covers. Which is to say, here’s hoping you can still find some tickets to Jack White’s impending solo show. It should get loud.