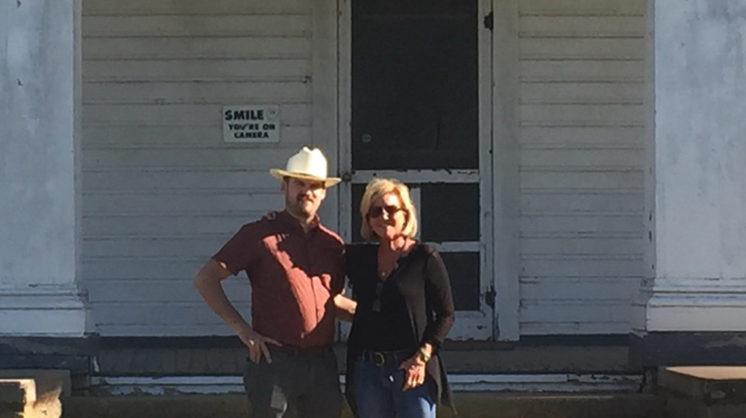 When a new movie or major commercial comes to town, the first person they meet with is a location scout. Sometimes they call the Oklahoma Film + Music Office to line it up; sometimes they talk to a friend in New York or Los Angeles who recently has filmed here. But the first question they always ask is, “Who is the best location scout?” Luckily for Oklahoma, the answer is Alison Naifeh.

“The first movie I ever saw being filmed in person was Dillinger in downtown Enid,” recalls Naifeh. “My dad took me by the set, and I remember thinking, ‘I am going to grow up and be an actress.’”

Dillinger was the 1973 gangster movie starring Oklahoma’s Ben Johnson and Cloris Leachman, who both had won Oscars for The Last Picture Show the year before. Seeing those two actors up close would’ve made any child want to dive into acting. But the film world had other plans for Naifeh.

After the renowned film program at USC helped her launch a career in production that would keep her on the West Coast for more than a decade, including exploring L.A. for the independent Cannon Film Group, she moved back to Oklahoma, got married and started working as a producer for advertising firm Jordan Associates. She enjoyed the commercial production work, but she really loved finding the perfect locations for each of the ads. So, when offered the chance to work locations on a big film coming to Oklahoma – Twister – Naifeh leapt at the opportunity. She quickly realized she wanted to learn everything there was to know about being a location scout.

“As a location scout, you get the script, you get the storyboards, and you start breaking down the script to figure out every location needed,” Naifeh explains. “Then you do your research: You go through county records, look over maps, reach out to city chambers and call around for contacts. Once you’ve done all of your research, then you get in the car and start actually looking at locations.

“During the scout, you take hundreds of photos. You come home, divide the photos into categories and build websites for each project so the producers, director and production designer can review everything and provide feedback. This part takes about four months. After that, the production team comes to town, and you drive them to all of the locations they find interesting. It can take another couple of months to agree on the perfect house or the perfect vista. Once you lock the hero locations, then the real location management work starts by getting contracts signed, figuring out where cast and crew will stay and finding secondary locations.

“For August: Osage County, the main location was a two-story, 1930s farmhouse,” Naifeh recalls. “Eighty percent of the movie was set in the house. It had to sit on 40 acres of land, have a great approach and have other structures nearby, like a barn or silo. We were competing with Georgia and Louisiana. We found a perfect 1933 Sears Roebuck house outside Bartlesville. After four months, they chose us; they chose to film in Oklahoma because of that house. It was magical.”

Since Twister, Naifeh has found iconic locations for I Can Only Imagine, waterfalls for The Veil, sand dunes for “American Gods” and farm houses for The Bygone, and even shut down I-35 for a highway chase scene in Yellow. But she is equally excited for all of her major commercial work.

“The OKC Thunder has been the driving force behind so many awesome national commercials,” Naifeh says. “I now get to work for Nike, Mountain Dew, Gatorade, Tumi, Footlocker and True Religion. And most of these commercials have bigger budgets than many of the films I work on. It’s awesome.”

It is awesome having someone like Alison Naifeh be our first point of contact. Once she gets them into Oklahoma, they book hotels, rent cars, rent equipment, cater meals and hire hundreds of Oklahoma crew members and actors … all because of a not-so-little girl from Enid who still has stars in her eyes.