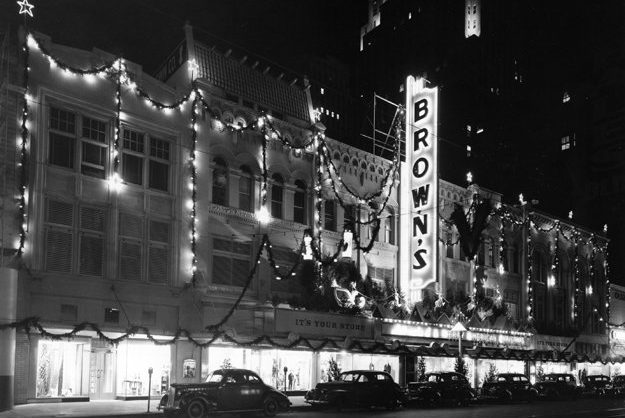 It was Friday evening, December 22, 1978. Dad dropped off Mom and me at Penn Square while he went to Shepherd Mall to finish his shopping. Santa was bringing Mom a pair of new diamond earrings, and Dad and I helped select the ones we thought she would like.

We hopped out of our grey Jackie Cooper Oldsmobile and hit the sidewalks. Back then Penn Square was open-air – the epitome of “Christmastime in the city.” Carolers strolled in their holiday attire, Santa set up his workshop in the courtyard near Montgomery Ward, and the shoppers were hustling and bustling from store to store.

One of our first stops was the candy counter at John A. Brown. Mom and I bought a sack of chocolate-covered pecan clusters – little pieces of chocolate-covered heaven. Across the way, Rothschild’s had their Christmas ornaments half-price, so we stocked up. We bumped into my sister-in-law Kathy and my one-year-old niece, Amy, on an escalator; they were going up, we were going down. None of us had time to chat in those last desperate days before Christmas.

A cup of hot cider at Kamber’s, singing a chorus of “Silver Bells” with the carolers, a drive through Nichols Hills and Lakehurst to see the lights, and the evening was complete.

Today that Christmas of 1978 stands out as a favorite holiday memory. We asked some Oklahoma celebrities and local movers and shakers to ponder their own personal favorites, and here is what they recalled.

“When I was first starting out in this business I had a crazy, nearly ridiculous drive to succeed in radio. I was working evenings for a small radio station outside Chicago, making a 90-mile trip to and from work each day.

“My family was in Phoenix, and I was alone for Christmas, probably for the first time ever. I woke up Christmas morning, having driven the 90 miles home the night before in a blinding snowstorm. I fixed myself a Hungry Man TV dinner and looked around the apartment, realizing it was Christmas and I didn’t even have a tree. It was just another day.

“Looking back on that Christmas and making that sacrifice, my Christmases are much different today. Now it’s family and friends and incredible Christmas dinners. But a couple of years ago, just for the heck of it, I asked my broadcast partner Ron Williams to join me Christmas morning, and we went to the studio and did our show live. It was our Christmas gift to our listeners. It was one of our best shows ever, and also one of the best Christmases I can remember.”

“Christmas is hands-down my favorite holiday. Always has been. As a kid, the magical notion that you could go to sleep and wake up to a surprise earmarked just for you was thrilling. And the gift was always perfect.

“My mother would bake Sand Tart cookies, a tradition generations-old. While the scent of baking dough, cinnamon and pecans filled our house, my dad would struggle to get the tree straight so we could decorate it with strands of popcorn that were either long or short depending on how much we’d eaten. Mine were usually short.

“The ritual was always the same. Midnight Mass. A sleepless night filled with anticipation. A morning of laughter and love. Even now, when I hear the first Christmas carol of the season, my spirits lift and I am a child again.”

“I think I was about six years old and I wanted a V-RROOM Bicycle. It was a bike that had a battery-powered motor on it – ‘Mattel’s fantastic V-RROOM motor that works with a real key’ – that made the bike sound like a motorcycle. It was the coolest thing. I woke up Christmas morning and was looking at all my gifts under the tree and didn’t see it. My mom and dad told me to turn around… and there it was! I jumped right on it. I knew exactly how to operate it, because the TV commercial showed you. It was my first bicycle. It was a real moment of independence.”

“Many years ago, I got the names of some underprivileged kids from the DHS, and a list of what they wanted for Christmas. I shopped for the gifts myself and loaded them into the car to deliver them, with the help of my young grandsons Graham and Garrett Colton.

“Most of the kids wanted bicycles, but there were also many other things they needed as well. I had a friend go along in a truck with all the bicycles in the back, and I went ahead in the car with the other gifts and my grandsons in tow. As we drove into the neighborhood, the kids saw the bicycles in the bed of that truck and their eyes lit up. They followed us until we came to a stop. The looks on those kids’ faces when they saw those bicycles is something I have always remembered. Today my grandsons say it’s one of their favorite Christmas memories, and it’s certainly one of mine.”

“My family would visit my grandparents, aunts, uncles and a slew of cousins in a small town in northern Illinois. Starting at noon on Christmas Eve, which is also my birthday, we would begin the festivities. Games, gifts and dinner led into the 11pm Christmas Eve church service. Usually exhausted, all of us kids would often fall asleep, only to be awakened to a dark church illuminated by hundreds of candles as we sang ‘Silent Night’ to ring in the holy holiday.

“After church we were rushed to bed at my grandparents with the promise of Santa’s impending arrival, which was only possible if we were asleep. When we awoke, we rushed downstairs to the basement, which had been transformed into Santa’s Workshop. There we discovered our parents and grandparents and a tree bursting with gifts.

“Christmas morning concluded with a large brunch full of our favorite foods. But most of all, those 24 hours included my favorite part: time spent connecting with our loved ones as a rare quiet fell upon our otherwise busy lives.”

“The holidays are always a special time in the Baron house as we celebrate both Christmas – my mother having been raised in the Swedish-Lutheran tradition – and Hanukkah, as my father was raised in the Jewish faith.

“Growing up in Orlando, Florida, we never had snow but I do have special memories of decorating the Christmas tree with my Grandpa Duke with ornaments handmade by my Grandma Ginny and lighting Hanukkah candles each night as a family.

“We’d continue the celebrations with a drive down to South Florida for big family holiday parties where my cousins and I would perform songs from ‘Annie’ and ‘A Chorus Line’ with my Grandma Helen – the Auntie Mame of the family – leading the festivities!”