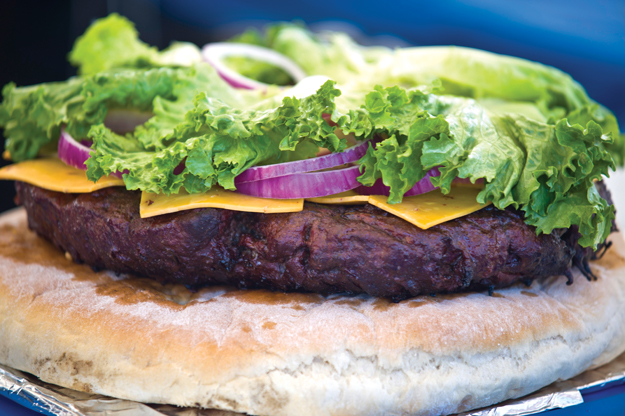 It's A Big Metro Out There – If You Can't Make It To Everything. Here's Where To Start.

June 1, David Stanley Chevrolet, Norman
Barry Switzer, star chef Kurt Fleischfresser, Slice’s own Caryn Ross and other celebrity judges determine once and for all (until next year) who can prepare the premier patty at the third annual mouthwatering melee known as the Battle of the Burger. Guests can enjoy samples and live music, and all proceeds will help the OK Kids Korral house pediatric cancer patients.

June 1, Nichols Hills
After a tenacious winter and unpredictable spring, with the prospect of a harsh summer in store, these six homeowners remain committed to helping nature make their corners of the world more beautiful. Visit the Bozalis, Gray, Mahaffey, Rother, Carlson and Stockton homes on the Nichols Hills Garden Tour to see what dedication can do, and get inspired. For ticket info, call chair Elyse Hatcher at 620.4432.

June 5-9, downtown OKC
A comedy crime caper called “The Taiwan Oyster,” a rampaging B-movie monster flick called “Big Ass Spider,” documentaries about subjects from Liz Taylor’s efforts to help fight AIDS to Wayne Coyne’s phone and so, so, so much more. The 13th annual deadCENTER Film Festival is here; for the metro’s film fans, it’s the most wonderful time of the year.

June 7-August 4, National Cowboy & Western Heritage Museum
An event with a rich appreciation for history, especially as 2013 marks its 40th anniversary, the focus of the museum’s prestigious Prix de West show is undoubtedly art, given the hundreds of carefully selected depictions of Western lands and characters – both human and animal – it displays. Reservations are required for the opening weekend of expert seminars and elegant awards banquet.

June 7-9, Cox Center
Calling the grand parade “distinctive” or “impressive” would be a vast understatement; it’s a monumental commingling of resplendently attired representatives of hundreds of Native American tribes from across the continent … and it’s just the beginning of the Red Earth Festival. Three days of handmade crafts and vibrant art, mesmerizing dance competitions and cultural spirit give this annual experience a truly unsurpassed atmosphere.

June 8, Oklahoma Motorsports Complex, Norman
You know those great-looking new shoes? Yeah, don’t wear those. Whatever color contestants’ clothes are going in, they’ll come out reddish-brown, because while the 5k course demands actions as varied as climbing cargo nets, crawling through concrete pipes and wading across waist-deep pits, the constants in the Oklahoma Mud Factor Run are soaking wet earth … and the thrill of overcoming its obstacles.

June 11-August 23, OK Contemporary Arts Center
Lots of artists are passionate about their work. Many would even say they live and breathe their craft. Laurie Frick can take that sentiment a step further: her living and breathing is her art, because the intricate collages and installations she creates for the solipsistic show “Walking, Eating, Sleeping” are based on biometric data – like graphs of her heart rate and body weight – that she records about herself.

June 14-23, UCO Mitchell Hall Theater
The hills, that is. Summerstock Productions seizes the season’s hiatus from classes to fill the UCO theater with students, pros and audiences of all ages for singing stage entertainment – proving in this case that even soldiers can’t stop the music if the heroes are plucky and true and have resourceful nuns as their aces in the hole: listen for “The Sound of Music.”

June 29, Chesapeake Arena
Millions upon millions of fans. Dozens of albums that have sold well over 100 million copies. Twelve sets of the best-loved pipes in the business. One stage. Oklahoma City hosts an unprecedented lineup of harmonious talent as New Kids on the Block, 98 Degrees and Boyz II Men perform in a single show. It’s clear why promoters dubbed this The Package Tour.