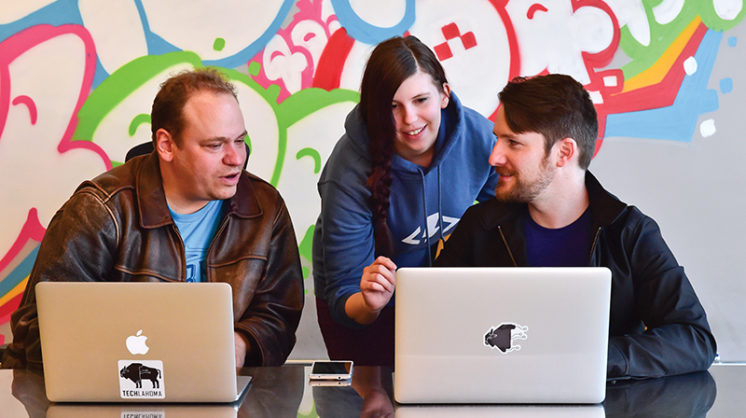 To begin, there is a blank screen. At the end, there is fully functional computer software code and huge databases that help companies and organizations deliver their services every day.

In between, there is “magic.” That’s how JavaScript code developer Amanda Harlin describes what she gets to do every workday.

“You get to be a magician – an actual magician – helping whoever needs it,” she says.

To a client who needs her code skills the most, it must seem that way. One month hardly anyone knows who that client is, the next, they are connecting with people everywhere to sell, influence or show the world who they are and what they are about.

“The reason I got into this was because I was trying to make generative music,” Jesse says. Generative music is produced by computer systems and is evolutionary by its programming. “I liked the idea of making a piece of music that I knew I would like because of constraints, but it would surprise me.”

Those of us who are not skilled at programming might think of all programs as static and only changing when more code is applied or changed.

But coding software to generate unexpected results produces an outcome that may even surprise the author of the code, as Jesse pointed out. “I liked the idea of a video game that had generative content because I could play a level having been the person that made the game. I would be surprised at what it gave back to me, and it would be enjoyable.” Magic.

But Amanda knows that this kind of magic isn’t just an illusion. It’s real and makes a difference in people’s lives. “The most exciting thing is that you can make something that matters. There are problems that you can solve right now,” she says. “You can make an app to help first responders after a tornado. You can make maternity prenatal apps that help [mothers-to-be] talk to their doctor better. There are so many things that you can do to help communities through open-source software.”

Her comments show a growing sense of civic-mindedness among programmers that is prominent on the Oklahoma City tech scene.

When she’s not working for a paying client, she is busy with groups such as Nerdy Girls-OKC and Nerdy Girls-Tulsa that promote confidence among girls and young women who are interested in computers and the code that makes them run.

This strong civic sense is something that is not unique to Amanda.

Today, the local tech community has a core group of code specialists who have a clear sense of the civic value of their skills. The Code for OKC project is an example of a nationwide trend of code-writing and big-data skills being used for the public good.

How does a citizen look into the Oklahoma City budget and figure much of anything out unless they have experience evaluating city budgets? In reality, they don’t. And Code for OKC volunteers believe that the budget of their city represents all of the city’s citizens, so it should be understandable to them. That’s why the group is developing code to apply to the budget database of Oklahoma City that will eventually let citizens easily pick and choose what kind of online information they want to see, and in what form.

Outside of the Code for OKC group, one person is especially excited about the possibilities: Doug Dowler, budget director for Oklahoma City. Rather than being on the defensive, he is all for the volunteer group’s efforts.

“My perspective is that it means more transparency and openness in local government, and giving citizens easier access to our information,” he says. “With our budget book, we try to put a lot of things in there that meet best practices for all of the information and transparency. Well, it ends up being 700 pages long before you get all of that done.”

Since his department works to develop a budget with integrity, he wants it to be understandable. 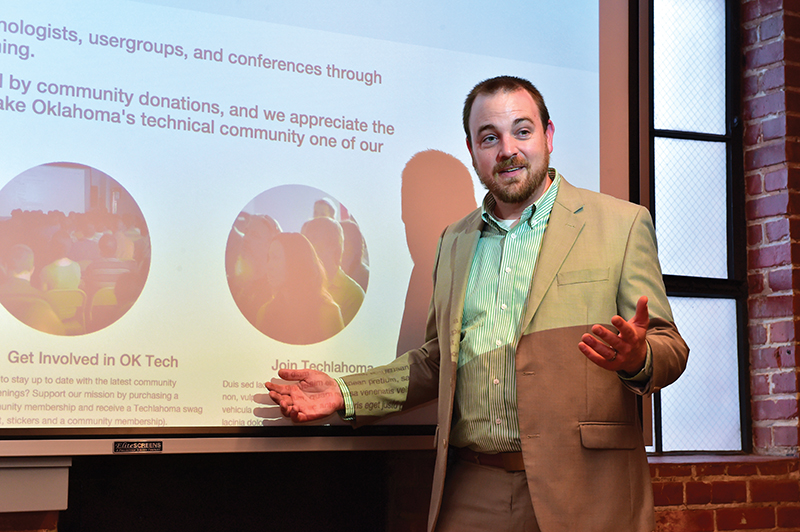 “So I really appreciate what they’re doing to make the budget information more accessible,” he continues. “And they have more of those tools from the technology perspective that help make it easier to digest and understand.”

But where does all of this collaboration come from among coders and big-data gurus? The short answer: It’s a part of the culture of the profession to collaborate rather than compete.

Jesse and Amanda Harlin started a foundation called Techlahoma to give people who develop code an organizational mechanism to gather and learn from each other. Its biggest event, and main fundraiser, is the annual Thunder Plains conference in Oklahoma City. This year’s packed opening and closing sessions challenged the popular image of the lone coder.

The reality of the profession in general and Oklahoma City’s tech community in particular is all about humans communicating with one another to develop code that anyone can understand five years hence. User groups seek to learn from each other on their own time, to increase the understanding of the code that they write. There is no pay for this, but a big pay-off of growth.

James Gray, a code developer for the Ruby code language, has been writing, blogging, podcasting and speaking about computer code for a number of years. He agreed that there is a tendency toward isolation because the profession draws introverts. But he went on to point out that, “the further you get in programming – the better and better you get – programming has very little to do about computers and a lot about people. Programming is very much a communication-oriented, people-centric thing. Teaching computers to do something, that’s the easy part. Getting people to understand what’s going on, that’s the hard part.”

Allen Smith and Mark Smith are independent consultants who help companies manage massive quantities of data. Their days are filled with helping large, fast-paced corporations, such as Sonic, make growing data streams yield quality results faster. So what do they do for fun? This summer they joined a user group to test out new data programs with baseball statistics as they attended OKC Dodgers games.

Allen says, “It was fun! We had a great time learning new ways of looking at data and watching baseball all at the same time.”

This is what programmers do. What would be work for the rest of us is both play and work for those who are immersed in this life. And the results benefit us all.