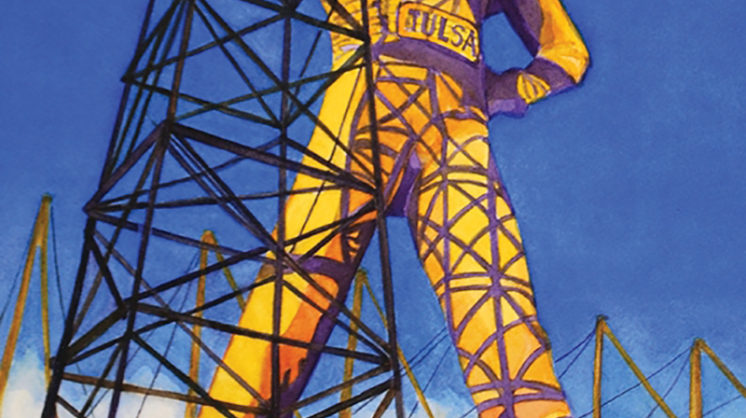 Everybody from Nat King Cole to Depeche Mode (yes, really) sang about getting their kicks on it, but it wasn’t just a musical list of cities; Route 66 made a big impact on the American experience and helped bring millions to and through Oklahoma. Visit the new exhibit “America’s Road: The Journey of Route 66” for an interactive look at vintage photos, artifacts and paintings of landmarks along the larger-than-life Mother Road.

Named for a sobriquet given to its host hamlet of Guthrie, the Queen of the Prairie Festival is a fairly new musical tradition-in-the-making, but it’s already more than earned its regal designation: the 2015 gathering of sonic excellence includes J.D. McPherson, Parker Millsap, Justin Townes Earle, Samantha Crain, The Cactus Blossoms, Smooth Hound Smith and on and on. Two days of smokin’ outdoor music are on tap; bring some sunscreen.

The Charm of Making

Going from a blank canvas, or a neat block of clay, to a finished, detailed work of art is a special sort of alchemy … and you can watch it happen. Over a dozen of the Howell’s artists, including

One in a Million

It’s based on a true story, a once-in-four-lifetimes event: one day in Memphis, Johnny Cash, Carl Perkins, Jerry Lee Lewis and Elvis Presley actually got together in a studio and jammed. That single serendipitous session forms the basis for a thrilling jukebox musical stuffed with the great hits of pioneering rock ‘n’ roll, as Celebrity Attractions makes you part of the audience for the “Million Dollar Quartet.”

Still fresh and filled with discoveries-in-waiting after 42 years, the May Fair Arts Festival isn’t just a Norman tradition; it’s the Assistance League’s gift to the community. With a panoply of painting, pottery, metal and woodwork, jewelry and other creativity – including the works of Celebrated Artist Hank Grant – plus food, music (Sugar Free Allstars!), kids’ activities and even an optional 5k, there’s plenty to enjoy; go get your present!

The Norman gallery is providing a window to another world – specifically, the realm of Ursula K. LeGuin’s Earthsea. It’s the basis for the Pioneer Library System’s 9th installment of The Big Read, as well as this exhibit; A.K. Westerman, G. Patrick Riley and select participants in the literary appreciation program contributed works inspired by LeGuin’s otherworldly opus to “From Earthsea to Fantasy.” Enjoy your trip.

Three artists have had Top 40 hits in each of the last four decades: Michael Jackson, Madonna and Al Yankovic. Who says being weird is a bad thing? The paragon of parodists and ne plus ultra of nerds has never stopped being clever, incisive and funny, and while you don’t technically have to attend this stop on his “Mandatory Fun” tour, why would you miss a possible opportunity to hear “Albuquerque” live?

Musical tribute, theatrical biography, career retrospective, season-ending celebration in song … call it what you will, the world premiere of “Rising Starr” should be a ball. UCO’s Broadway Tonight series ends its season on a high note with the new story of Oklahoma singer Kay Starr, a jazz, pop and country chanteuse Billie Holiday once called the only white woman who could sing the blues.

Saddle up, little dogies! Or get your parents to drive you – the important thing is that you get in on the silver anniversary edition of this old favorite for the young at heart. The 25th Chuck Wagon Gathering corrals a ton of hands-on activities, live entertainment, pony rides, campfire-cooked Western foods and plenty more. It’s the museum’s largest outdoor event, and a perennial pleasure.