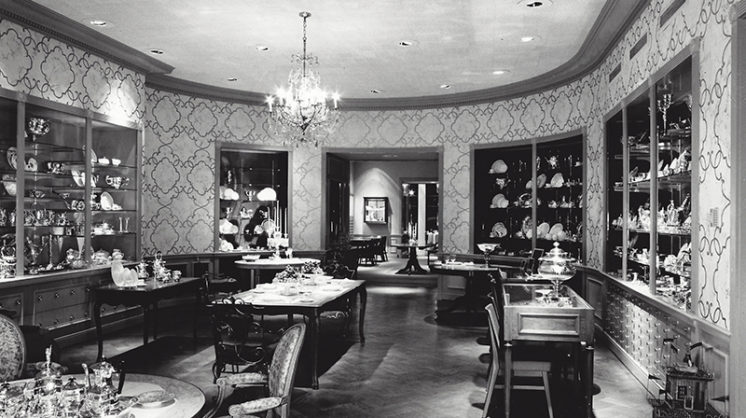 That was the slogan for Hightower, an upscale boutique nestled in the heart of downtown Oklahoma City. Beginning in 1956, Frank Hightower and his wife, Dannie Bea, set up shop in a charming three-story chateau at 412 Colcord Street, next door to the Hightower Building at 105 N. Hudson.

“The building was originally home to the Woodmansee-Abbott Music Company,” Hightower’s son, Johnson, tells 405 Magazine. “Dad bought it and remodeled the entire north façade because he wanted the appearance of a New York storefront. He and my mother traveled extensively and understood exquisitely crafted products – merchandise unavailable here at that time. So he decided he would bring it to Oklahoma City.”

“Mom was actively involved in buying but not in business operations; that was Dad’s domain,” Hightower says. “Dad ultimately hired a young New York merchandiser, Art Cella, as store manager, and they all would take trips routinely to the big city to find attractive lines to broaden inventory. Art was a big guy, and he would grab them both by the arms as they bustled through the crowded merchandise districts.”

The shop evolved with the times, Hightower said, with a new kitchen department that looked surprisingly like Williams Sonoma of today.

“We were the first merchandiser of the Cuisinart in Oklahoma, shortly after French chef Simone Beck delivered one to Dad after her cooking demonstration in Oklahoma City,” Hightower remembers. “We still have it, although it’s not in very good shape anymore. Another expansion was devoted to leather, including luggage by Fulton and desk accessories by Cross and The Alex. By then, the shop had grown to occupy the entire ground floor of both buildings. All was a testament to Dad’s vision and his conviction that our city wanted this.”

By 1980, Hightower says there was little support for high-end retail downtown, and his father decided to close.

“Penn Square Mall had many choices, Nichols Hills Plaza offered new boutiques and the ladies didn’t need to travel downtown anymore to shop,” Hightower said. “Quite a few still made a day of it – coming to The Cellar for lunch and then shopping at Hightower – but for the most part, downtown had become a place to drive to work and drive home at the end of the day.”

Today, the building’s façade remains largely as it was during its retail heyday. The crystal, silver, china and jewelry are long gone, and today the space is a multi-tenant office property still owned and managed by the Hightower family.

“For Dad, it was a labor of love bringing fine things to Oklahoma City. When he made the decision to close, which was announced by personal letter to all store patrons, many sent responding letters thanking him for his many years of service,” Hightower says. “It truly was the end of an era.”