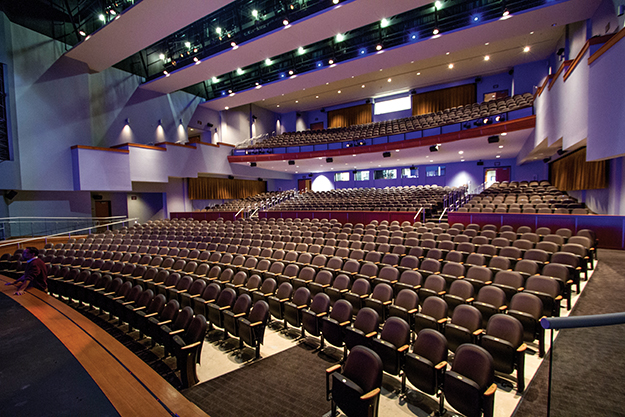 THEATRE – IN THE SENSE OF PRESENTING A LIVE DRAMATIC OR MUSICAL PERFORMANCE TO AN AUDIENCE – doesn’t actually require a theater per se; actors can ply their crafts in front of campfires or on rocky hillsides or in dusty barns. But a good performance space can be both a valuable resource and an inspiration for those who tread its boards – Oklahoma City Community College has a new muse, and its name is VPAC: the new Visual and Performing Arts Center Theater.

Conceived and designed as a state-of-the-art venue capable of hosting large Broadway touring productions, the theater is equipped with the same light and sound equipment that can be found in facilities such as the Staples Center in Los Angeles and the Grand Ole Opry in Nashville, with an orchestra pit that can accommodate a 20-piece ensemble. The thoroughly ADA-compliant auditorium features eight box seats, 306 balcony seats, 375 upper orchestra seats and 360 lower orchestra seats. Oh, and – naturally – a fully stocked concession stand. The stage and building are acoustically advanced and adaptable to different scales of performance; plus, with the flip of a switch, the theater can become a movie screening facility with 7.1 surround sound – a perfect addition considering the prominence of OCCC’s revered Film and Video Production program.

A 14-foot-tall sculpture consisting of a stylized representation of the college’s initials greets visitors at the entrance of the theater center; titled “Crescendo,” it’s the work of local artist Collin Rosebrook.
Other local artists and student creators will have a space to display pieces, and some students will gain experience as docents, in the Inasmuch Foundation Gallery adjacent to the theater’s west wing. Its first exhibitor, Desmond Mason, called it “perfect,” adding that “this is one of the nicest galleries I’ve ever seen.”

“These changes have been in the making for 10 years,” said Lemuel Bardeguez, OCCC’s director of cultural programs. “The college had a dream all those years ago to serve Oklahoma City’s south side with facilities like these. This is the product of that dream.”
Curtain up.

IN WITH THE NEW

The inaugural performance in this magnificent new space is mere weeks away: a one-night production of “Flipside: The Patti Page Story” on Wednesday, March 12. The show was written by UCO’s Greg White from interviews with the chanteuse herself, and tells the story of a soft-spoken Oklahoma native who became one of the highest-selling female recording artists in history.

Born in Claremore as Clara Fowler, Page rose to the very top of the airwaves: she was the top-charting female vocalist and the best-selling female recording artist during the 1950s, and sold over 100 million albums in her career. She was inducted into the Oklahoma Music Hall of Fame in 1997 and received a posthumous Lifetime Achievement Grammy last year.

This off-Broadway musical about “The Singing Rage” features 23 of her chart-topping hits including “Tennessee Waltz,” “Old Cape Cod,” “Mockin’ Bird Hill” and “Allegheny Moon,” as well as possibly her most famous creation, “How Much Is That Doggie in the Window?”

For tickets to or more information about this first performance in the VPAC (hooray!), visit occc.edu/cas or call 682.7579.