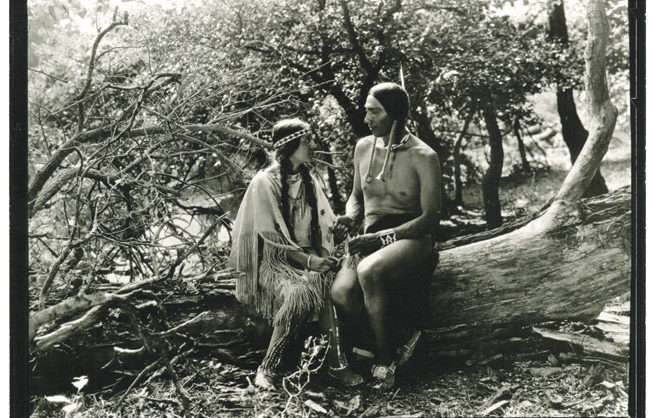 On October 17, 1920, the silent film “The Daughter of Dawn” flickers onto the screen of the College Theater in Los Angeles. The film fades in on White Parker, son of the great Comanche leader Quanah Parker, standing atop a giant rock and scanning the horizon. Panoramic black and white images of the Wichita Mountains near Lawton flutter across the big screen, stopping on a herd of bison, or “buffalo.”

Cut to: Hunting Horse, one of the most revered Kiowa leaders in history, who performs the role of the Chief of the Comanche Nation in the film. Hunting Horse has the first line; his words are projected on “intertitles,” which are dialogue text pages inserted into the film between scenes:

“For many days we have looked… my people are hungry. Go you and see if White has as yet not sighted them [buffalo].”

Pan to: Wanada Parker, the sister of White Parker and daughter of Quanah Parker, who performs the character of the same name. Jack Sankey-doty, also Comanche, stands next to Wanada in his role as Wolf. Wanada is in love with Wolf in the film, but Wolf is in love with Dawn, the Comanche Chief’s daughter, played by Esther LeBarre. Tragically, Dawn is in love with White. And, for the first time in film history, Tinseltown audiences watch an all-Native American cast from Oklahoma perform Hollywood’s interpretation of an Indian “love triangle.”

An 80-minute silent film, “The Daughter of Dawn” features a cast of approximately 300 Native people from southwestern Oklahoma, mostly Comanche and Kiowa, most of whom were first-time actors. The Wichita Mountain Wildlife Refuge was an ideal location for filming the thunderous buffalo chases and epic battle scenes. During filming, director Norbert Myles ordered his one-man camera crew to shoot the buffalo chase scenes “from a pit so as to have all the buffalo… and Indians… pass directly over the top of the camera.” Thirty Native hunters participate in one of the magnificent chase scenes, triumphantly ending in a successful kill. Later, back at the Comanche camp, the men dance in celebration as the women prepare the buffalo for a meal. Thereafter, the film’s love triangle begins to take shape.

Unfortunately, this “sneak preview” of “The Daughter of Dawn” in 1920 would be the only screening of the film, which was never seen by its all-Native cast. One critic at the preview celebrated as a “breathtaking adventure” which had “hardly been duplicated before.” Nevertheless, it was not nominated for any awards and the film disappeared.

For nearly a century, cinema scholars thought the film was lost. Some speculated that perhaps “The Daughter of Dawn” fell victim to fire, as many movies did during this early era when motion pictures were shot on highly flammable silver nitrate film. Less than 10 percent of all movies made during this era have survived, with “independent” films, such as “The Daughter of Dawn,” perhaps representing only one percent. It didn’t help that Myles had been black-balled by Hollywood for past disagreements with top movie executives. It appeared that the Comanche legend that inspired the film would remain a legend… never to be seen again on the big screen.

In 1999, Leo Kelley, a curator at the Oklahoma Historical Society’s (OHS) Museum of the Western Prairie in Altus, wrote an article after researching the surviving evidence of the movie. In his research, Kelley successfully connected a script of the film that had been hidden away in the Library of Congress with still photographs in the museum’s collection that were taken on location during filming. Kelley also located an article about the film by Norbert Myles, titled “My Adventures Among the Oklahoma Indians.”

A few years later, Brian Hearn, film curator at the Oklahoma City Museum of Art, received a call from a private investigator in North Carolina who claimed to have received a silver nitrate film as payment for an investigation, and believed the film to be “The Daughter of Dawn.” The investigator was interested in selling it, but as the museum would not begin collecting films until 2005, Hearn decided to contact the OHS.

“We were ramping up to the opening of the new Oklahoma History Center (OHC), so we weren’t in a position to purchase the film,” explains Dr. Bob Blackburn, director of the OHS. “We referred him to Michelle Svenson, who worked in the Film Department at the Smithsonian Institution’s National Museum of the American Indian in New York. Over the next two years, Michelle negotiated the price down to an amount fundable by the Lawton Community Foundation and the McMahon Foundation, which allowed the OHS to purchase the film in 2006.”

“I was fortunate enough to be at the OHC the day the film arrived,” Hearn says. “It was so exciting to open the cans, knowing that they probably hadn’t seen the light of day in nearly a century. We immediately noticed some serious issues with the film, though. Masking tape, for example, had been used in places on the film, and had burned through the film emulsion in spots. But the quality of the imagery captured on the silver nitrate film stock was still spectacular.”

A grant from the National Film Preservation Foundation funded the restoration process. It was conserved by the Film Technology Lab in Hollywood and transferred to 35mm film, DVD and other media formats. The Academy of Motion Picture Arts and Sciences offered to house the delicate silver nitrate film, and it was transferred to the Academy’s vault in 2007.

When OHS staff began holding informal community screenings of their new old treasure, they met numerous descendants of the cast who explained connections to their respective relatives, and identified a Cheyenne tipi prominently featured in the film that Sleeping Bear had given to the Kiowa during the 1840s. The Kiowa descendants explained how the tipi had been “renewed,” or ceremonially restored and repainted, in 1916 by renowned Kiowa artist Silverhorn, who was well respected for his winter counts and other important pictorial documentation of Kiowa life around the turn of the 20th century, and who was accompanied by a young Stephen Mopope, later to become one of the world-renowned group of artists known as the “Kiowa Five.”

Inexplicably, the Kiowa tipi disappeared in the late 1920s. But in an astounding stroke of good fortune, the OHS inadvertently uncovered it after a request to view an unrelated collection.

“During the exploration of the Iowa collection, our curator, Matt Reed, discovered that the tipi from the film had been donated to the OHS during the late 1920s, but in the cataloguing of the tipi someone accidentally dropped the ‘K’ in ‘Kiowa,’” Blackburn explains. “So, since the 1920s, the tipi had been catalogued in our collection as an ‘Iowa’ tipi and we never knew we had it. That was an emotional discovery for us and for the Kiowa people, who were invited to view and bless the tipi.”

In May 2013, the rediscovered tipi will join the OHS’ current cinema-themed exhibition titled “Oklahoma @ the Movies,” with an exploration of its role in the film, as well as its cultural, historical and artistic importance.

Still working to improve “The Daughter of Dawn,” the OHS decided to commission an original score, and contacted renowned Chickasaw composer Jerod Impichchaachaha’ Tate. Although Tate expressed a strong desire to score the film, he recommended that the OHS commission David Yeagley, a Comanche composer, instead – it seemed only fitting, since the film tells a Comanche story.

“Yeagley spent a year composing original music for every second of the film,” Blackburn says. “Every character has a melodic theme associated with them. He did a phenomenal job with the score.”

While making plans to synch the music to each scene in the film, Blackburn mentioned the project to Oklahoma City University President Robert Henry, who arranged for Blackburn to meet with Mark Parker, Dean of the OCU School of Music. Parker was delighted for the new original score to be performed and recorded by the OCU Philharmonic. The historic re-release of “The Daughter of Dawn” on June 10 at the OKC Museum of Art will therefore also be the “world premiere” of the film with its new original score.

The OHS plans to screen the film later this fall at the Telluride, Denver and San Francisco Film Festivals. Blackburn says that award-winning documentary filmmaker Ken Burns has committed to helping the OHS with its distribution, and with a screening at a prominent upcoming silent film festival in Italy. It’s the beginning of a new day in the sun for a long-lost piece of Oklahoma’s cinematic history.