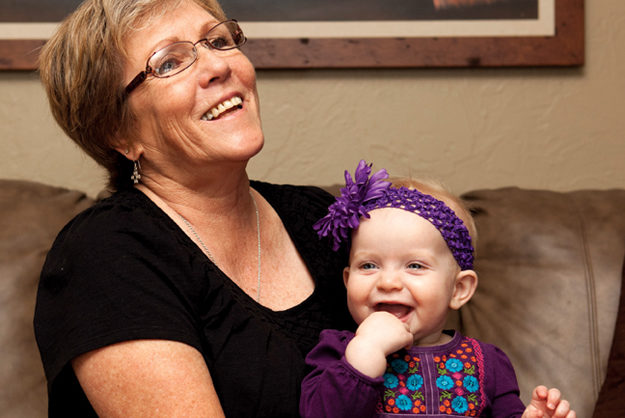 When Donna Taylor holds her eight-month-old granddaughter Elizabeth and looks into the baby’s huge, expressive blue eyes, there is love and tenderness and a hint of playfulness on her face when she says, “This is my reason for staying healthy.”

But something else is there as well: a strength, a resolve, a marked determination. It is the look of a woman who has faced down serious coronary disease. After more than a dozen surgical procedures at the Oklahoma Heart Hospital, and after learning to make different lifestyle choices – some of which were a long time in coming – Donna is a survivor.

“I want to live,” she says, and one would be hard pressed to find four more powerful words. For her granddaughter – but even more importantly, for herself – Donna Taylor wants to live.

A vigorous, active woman, Donna’s odyssey into heart disease was unexpected. At her annual physical in July 2004, her cholesterol and blood pressure were excellent. She left the doctor’s office thinking, “Well, that’s over for another year.”

Two months later, she woke up dizzy on a Sunday morning. She fought through the dizziness, but then began to feel unusually full while eating. Then came severe indigestion.

“At one point I looked up the symptoms online,” she recalls, “and it said, ‘If you are looking up heart attack symptoms, get yourself to the emergency room.’ But I still couldn’t get it through my head that it might be my heart. Even though I’d smoked all my life and was still smoking, it didn’t compute. If you’d told me I had lung cancer, I would have believed it. But not heart disease.”

Finally, her husband John took her to the hospital. She collapsed just inside the door. Her right coronary artery was 95 percent blocked. Doctors implanted stents into her artery – and the next morning, she suffered an actual heart attack. She was told that if she had not come to the hospital when she did, she would likely not have lived through the night.

Still, after this onset of heart disease, Donna continued to smoke for another four months.

“When I came home, I would keep people away so I could have a cigarette,” she says. “But I didn’t get better. I did everything the doctors told me to do, except quit smoking. Four months later I went back and when I told my doctor I hadn’t quit smoking, he slammed his hand on the table and said, ‘You are undoing everything I’m doing.’ I haven’t had a cigarette since that conversation. That was seven years ago.”

More surgeries followed, including a procedure to repair another 95 percent blockage in the crucial carotid artery. At around the same time, Donna’s younger sister Debbie began to suffer a series of strokes. Debbie is now paralyzed and lives in a nursing home, unable to communicate.

Donna says, “I can remember at procedure number 12 or 13, thinking, ‘I might die.’ I had to take responsibility. I knew I was there because of decisions I had made. I especially think of my sister, because she doesn’t have a voice anymore. I could have ended up in a nursing home, too, if they hadn’t caught my carotid artery blockage in time.”

Donna is 58 now. She exercises regularly, watches her diet and has never smoked again. She bounces little Elizabeth on her knee, adjusts the bright purple bow in the girl’s hair and says, “We need to be talking about this. My message to other women is that all the research and the work that’s being done is amazing, and it makes a huge difference. But you have to take some responsibility and get off the couch, not have that ice cream or French fries, not smoke that cigarette. It has to do with the decisions you make today.”

Cardiovascular disease is the leading killer of women in the United States, claiming the lives of more than 500,000 women every year. The American Heart Association’s Go Red for Women initiative provides resources for women to take charge of their heart health, with the goal of longer, healthier, more productive lives. Find more information at www.goredforwomen.org.