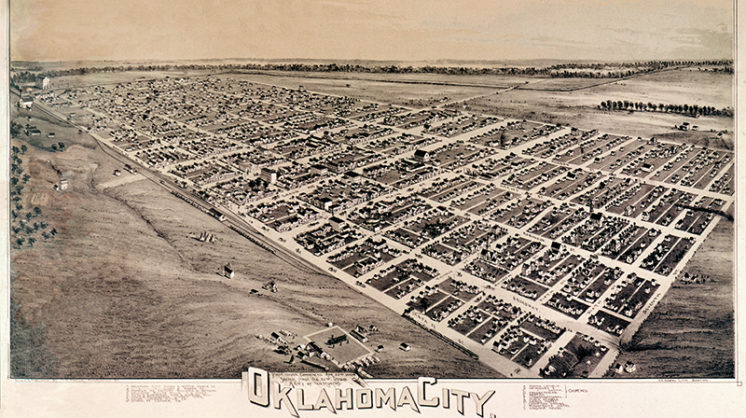 The old adage that “winners write the history books” is accurate, but only part of the truth that anyone telling a story is presenting it from a specific, and usually slanted, point of view.

Even in cases that aren’t obviously partisan or controversial (Thunder and Spurs fans describe the end of Game 2 very differently), it’s worth bearing in mind the limitations of the narrator’s perspective. Native tribes and the frontier were subjects of great fascination in 19th-century America, and many people were curious about life in Indian Territory … so who told the stories, and using what information?

The Fred Jones Jr. Museum of Art is proud to present Picturing Indian Territory, the first scholarly examination of Oklahoma’s visual history as told through the eyes (and outsiders’ mindsets) of the artists who visited the land over the course of nearly a century – from unincorporated lands through Indian and Oklahoma Territories and the formation of the state.

“Newspaper and magazine reporters, government functionaries and artist-travelers were drawn to the region by the rapidly changing fortunes of the region’s traditional Indian cultures in the wake of war and non-Indian settlement,” says co-curator B. Byron Price. “In crafting their images, they relied, in at least a few cases, on written accounts and fertile imaginations rather than personal experience. Whether or not they were eyewitnesses to scenes they portrayed, they painted, sketched and photographed what interested them.”

Picturing Indian Territory will remain on display through Dec. 30. Find more info at ou.edu/fjjma, and be ready to reconsider your perspective.