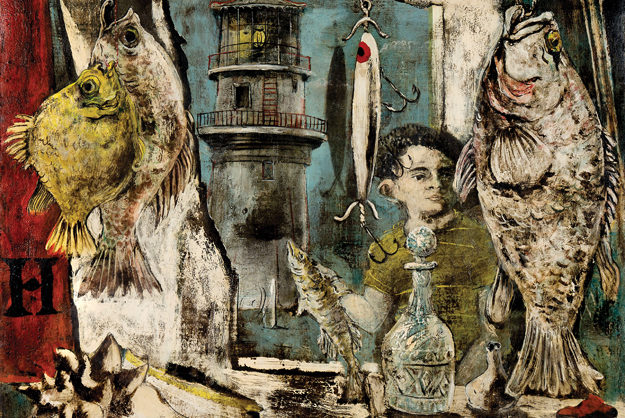 The Holdup
March 1-June 2, Fred Jones Jr. Museum of Art
The best-laid plans of artists and men often get sidelined by politics. After World War II, the U.S. government collected modernist paintings for a traveling exhibit trumpeting American freedom of expression … and abandoned the idea when other officials didn’t like the content. “Art Interrupted” reassembles that exhibition for a meditation on the politics of art and cultural diplomacy.

Sprinting Toward Spring
Registration open now, events April 6-7, Waterford Complex
Even after three full decades, one of the metro’s foremost fitness events hasn’t lost a step. 5k and 10k runs, 10-, 33- and 50-mile bike tours, a wheelchair 5k, a 1-mile children’s run, a 2-mile walk and stroller derby – the 31st Redbud Classic offers exercise for every level of exertion, all benefiting the philanthropic work of Oklahoma Lawyers for Children.

Ovoid Celluloid
March 9, Bricktown Events Center
Craftsmanship is worth celebrating in any medium, be it a director’s oeuvre or a chef’s oeufs. This year’s 29th edition of the OKC Museum of Art’s annual Omelette Party celebrates and benefits its outstanding film program – live music, an art raffle, gourmet omelettes from local restaurateurs and more combine in “Lights, Camera, Egg-tion!”

Top o’ the World
March 1-3, Sooner Theatre
Starting at the bottom and climbing the corporate ladder takes decades of unstinting toil, dedication and self-sacrifice … unless you’re willing to cheat. The Sooner Theatre, featuring high school Studio students getting a real head start, sings its way through a send-up of corporate politics in “How to Succeed in Business Without Really Trying.”

Unstoppable
March 1-2, 50 Penn Place
It’s totally an artistic movement – just not the kind you might be thinking of. Development and innovations are the engines that drive “Momentum,” the annual showcase for Oklahoma artists under 30 in a creative venue created specifically to show off their creations, accompanied by groove-shaking music both nights of the propulsive experience.

The Way You Move
March 12, UCO Mitchell Hall Theater
While it’s technically accurate, calling the members of the Pilobolus troupe “dancers” is a vast understatement: their performance is practically sculptural, with their entwined bodies as the medium in a whirling, shifting display of athleticism and artistry that has been mesmerizing audiences for over 40 years, and that is the finale of this year’s Broadway Tonight series.

Room for Growth
March 25, Myriad Botanical Gardens
If it’s spiritually rewarding to raise a single backyard bloom from bare earth to radiant beauty, imagine the feeling of watching a 17-acre site blossom into a scenic wonderland. The Myriad Botanical Gardens is marking its 25th anniversary with a free reception recounting its history and honoring those who have tended its growth so far.

Songs of a Native Son
March 26, Oklahoma City Community College
“I like words,” says Jimmy Webb. “I like the way they clash around together and bang up against each other, especially in songs.” He certainly has a knack for making them dance; his Grammy-winning creations have been performed by some of the music industry’s greatest giants. This evening, though, the Oklahoma treasure takes the keyboard to share them himself.

Fragile Creatures
March 27-April 13, Lyric’s Plaza Theater
The human spirit can be delicate, but over-protecting it risks encouraging that fragility – which can make it harder to deal with reality, since life doesn’t always handle with care. We are none of us unicorns, after all. Lyric Theatre’s 50th anniversary season continues with “truth in the pleasant disguise of illusion” in Tennessee Williams’ brooding, powerful “The Glass Menagerie.”

Four to Love
Through April 28, Istvan Gallery
Something old (the gallery’s relationship with mixed media veteran William Struby and dazzling photographer Nathan Lee), something new and something borrowed (pieces from emerging multimedia artists Amanda Bradway and Alesa Clymer incorporating literary inspiration and repurposed material components … even something blew (well, blown, courtesy of Blue Sage Studio’s glassworks). This beautiful Spring Show is a creative match made in the Istvan Gallery.