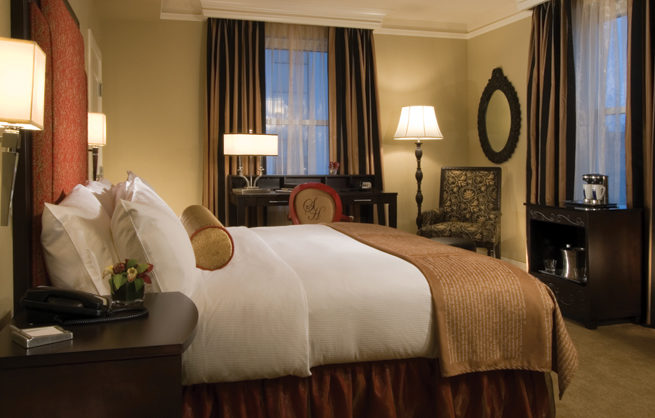 Fort Lauderdale to Seattle, Winnipeg to Buenos Aires – there are nearly 300 Hilton Brand hotels in North and South America, and while they all share the brand’s pride in impeccable service and presentation, one facility in particular leaves its colleagues… well, in the dust. Out of the 293 Hilton Brand hotels in the United States, Canada, Mexico and South America, Oklahoma City’s Skirvin Hilton received the highest ranking in cleanliness for guest rooms and bathrooms based on feedback from the guests who used them. And the praise for the city’s oldest hotel is external as well as internal: AAA has also honored the Skirvin Hilton with its Four Diamond rating for three consecutive years. Of the 32,000 properties reviewed, only three percent receive such a distinction. Furthermore, the 2012 U.S. News and World Report’s Best Hotels rankings, based on high customer satisfaction among published travel experts, listed it as the Number 1 hotel in Oklahoma City – and in the state of Oklahoma. Trust the experts: the Skirvin has earned its, shall we say, sparkling reputation.

A Prize of Gold

Since 1955, with a break to settle some copyright issues, the most outstanding entry at the Cannes Film Festival each year has been rewarded with the Palme d’Or, a stylized golden palm frond. Since 1951, the biggest winner at Berlin’s celebration of cinema has received the Golden Bear. With the growing popularity and sustained success of Oklahoma City’s deadCENTER Film Festival, is it time to replace the Grand Jury award with something a little more distinctive; a trophy of our own? The two venerable European festivals’ awards are based on elements of their host cities’ coats of arms, so following that tradition via Oklahoma City’s seal would allow for the Golden Peace Pipe, Atom, Plow or Hatchet and Stake – but bear in mind that our festival isn’t named for its host city, but for its more general geographic location. So perhaps the solution that hits the metaphorical bullseye would be just that: the Golden Target.

Many museums are justly considered repositories of cultural refinement, since they’re stocked with ancient artifacts or fine art. But man does not live by Botticelli alone, and a project currently in the planning stages could help enlighten Oklahomans about our less-rarified culture, and make the state’s museum scene a bit more fun. Dedicated to the creative spirit of Oklahoma’s people and featuring Sooner contributions to the fields of music, film, television, humor, theatre, comic art and more, the OK POP Museum would be a sister facility of sorts to the Oklahoma History center in OKC, as both would be organized and administered by the Oklahoma Historical Society. Though not yet more than a gleam in an architect’s eye, the proposed four-story, 75,000-square-foot edifice already has a location: a square block in Tulsa’s bustling Brady District that’s currently a parking lot for Bank of Oklahoma employees. BOK is donating the space… contingent on the state legislature passing a $40 million state bond issue this year to help fund OK POP’s construction. The multimedia museum has already received vocal support and donations of exhibit materials from artists like Wanda Jackson, Roy Clark, Garth Brooks and Kristin Chenoweth, but without more popular support it might become a mere footnote in the state’s cultural history. To read more about the plans and the process, visit projectokpop.com.