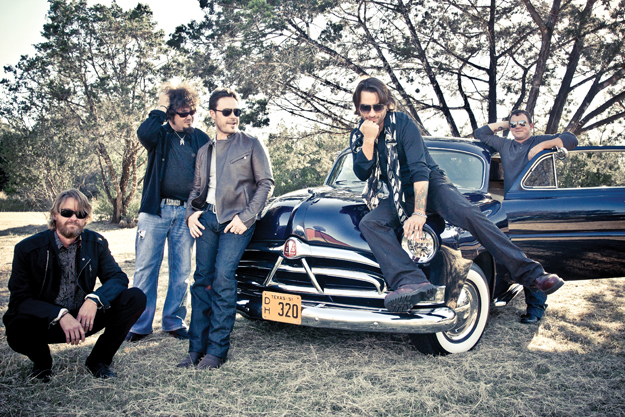 Cody Canada and The Departed are about to release their new album “Adventūs,” the Latin word for “arrival.” The title is apt, though not for Canada himself – this is not  the first rodeo for the former frontman of the legendary band Cross Canadian Ragweed. It refers instead to the arrival of The Departed as a creative unit: this is the first studio album of original material for Canada and mates Jeremy Plato, Seth James, Steve Littleton and Chris Doege, after a debut of covers and tributes to Oklahoma artists called “This Is Indian Land.”

“Doing other people’s songs for the first album gave us time to let the new stuff percolate,” explains Canada. “It’s a whole lot of fun. I can’t sleep at night. It keeps me awake, not from worry but from excitement. We’re just ready to tear it up.”

Adventūs drops November 13; hear some of the new material November 10, when The Departed appears in the third annual Shawnee Music Jam.

Through a Muslim Okie Lens

The free Art in the Heartland exhibit November 14 at Oklahoma City University’s Wanda L. Bass Music Center emphasizes works influenced by the artists’ Muslim faith, but that’s not entirely what sets it apart: these artists are Okies too.

Last year’s exhibition included photographs by Norman’s Nadia Martinez, an Oklahoman raised by a Palestinian father and American mother. Along with captured moments of Muslim life, her work depicted pure Oklahoma sights such as lightning-shaped cracks in dry earth and a spectacular brooding storm on the horizon.

“We’re focusing in particular on people exhibiting not only their faith,” said Adam Soltani, executive director of the state chapter of the Council on American-Islamic Relations, “but how their faith within Oklahoma culture has influenced their work.”

The Abominable Snow Men (and Women)

Hurricanes and tropical storms have been assigned names since the 1940s, but severe winter weather is merely referred to as easily confused descriptors like “the blizzard of ’91, or was it ’89?” or odd meteorologist-speak like “Oc-Snow-Ber.” Until now. The Weather Channel has taken the icy initiative and assembled a roster of names for significant winter storms during the 2012-’13 season. Intended to raise awareness and aid communication about such events, the list is made up primarily of gods and historical leaders, ranging from Athena to Zeus. It’s a fun and potentially useful idea, and a decent start… but isn’t naming a destructive and possibly deadly storm after the Greek goddess of wisdom counterintuitive?

Former pig-lovers’ paradise The Divine Swine has gone to Hog Heaven, but at least it went pork-belly-up for a good reason, as chef Josh Valentine suddenly found his plate full with another commitment: going to Seattle to compete in season 10 of “Top Chef.” The culinary combatant is Oklahoma’s first contestant in the show’s history. Watch Valentine vie for the $125,000 grand prize against 20 other chefs from around the country beginning with the November 7 premiere on Bravo… and cross your fingers that this season calls for a lot of bacon-heavy recipes.

A hunting permit doesn’t include license to kill at will; if you want to bag the bird to star in your Thanksgiving feast, you have to play by Oklahoma rules:

• Have a valid hunting license AND Fall Turkey license.

• Watch your whereabouts – Oklahoma and Cleveland counties are closed to gun-hunting, Canadian and Grady allow one tom (bearded) turkey per hunter with a gun, Logan allows you to cap a single bird of either gender. Archers, however, can plink one of either gender statewide.

• Take an almanac – you can only shoot from a half hour before official sunrise until official sunset.

• Stay on the move – roost shooting is prohibited.

• No Judas birds – live decoys are a no-no, although you can use artificial replicas.

• Practice your gobbling – Recorded turkey calls are prohibited, specifically including smartphones. There may be an app for that, but it’s illegal.

• If all this sounds too complicated, remember that you can buy turkeys. At, you know, grocery stores.

It’s Thanksgiving month, and nothing adds to our gratitude more than the blessing of constant construction, right? It’s our chance to snuggle bumper-to-bumper, share a smile and toss a friendly wave to our newfound neighbors. (Use all five fingers, please.) Here are some of the major snags expected for November:

OKC
Construction of the new I-40 Crosstown and its sister Boulevard rolls on through November. Continue expecting warning signs and lower speed limits when traveling east or west on I-40 south of downtown. Peak travel hours may snarl lanes. Don’t worry – it will all be over in 2014. Downtown itself will still try to throw you off with closed streets.

The I-40/I-44 interchange near the State Fairgrounds will host nightly lane and ramp closures just south of there through the middle of the month. Expect problems in both directions on I-44 from 7pm-6am, so try an alternate route during those hours.

NORMAN
Transportation prognosticators were aiming to finish intersection improvements on 24th Avenue Northwest (in front of the Super Target) early this month. If not, the avenue should continue to choke down to one lane in each direction for a while.

EDMOND
Lane closures remain while they fix the drainage problem north of 15th Street on Bryant Avenue. Be patient. When it’s all done around March, Bryant Avenue shouldn’t flood in heavy rains anymore.

Oklahoma artist Romy Owens has a new address, and the Skirvin Hilton has a new long-term resident – it’s a match made in creativity. In partnership with the Paseo Arts Association, the Skirvin has begun an Artist in Residence program; Owens, whose distinctive abstract mosaics are created from photographs she takes and sews together by hand, is its first star.

“We were impressed with Romy’s creative skills, engaging personality and unique point of view,” said Skirvin general manager Martin van der Laan. “We are very eager to introduce Owens and her work to our guests and residents of the city.”

The public can drop in to her Skirvin studio and become a part of her year-long project… probably. As the artist-in-residence says, “I am there most days, but because I am human, some days I am not there.”

A picture is worth a thousand words… but in this case, the thousands of sheets of paper that make up the beautiful, colorful cascades of local designer Jessica Hopkins’ autumn-inspired art speak for themselves. Swing past Balliets at 5801 NW Grand, on the southeast end of Classen Curve, and take a look before these leaves – metaphorically speaking – fall.

Where the Plains Came Sweeping Down the Wind

Life can be hard enough without the things we take for granted, like the very air we breathe, turning against us. Continuing his award-winning career that has encompassed film series “The Civil War,” “Baseball,” “Jazz” and “Prohibition,” legendary documentarian Ken Burns delves into “The Dust Bowl,” a two-part, four-hour documentary premiering November 18-19 on PBS. Buoyed by firsthand accounts, the film chronicles the worst manmade ecological disaster in American history, the devastation it wrought on the farms and residents of the Great Plains and the knowledge both that it was preventable, and that it could recur.

When 2012 began, the state of Oklahoma contained zero distilleries. By next spring, it’ll be time for a celebratory drink… or two. After years of planning and research, the Merritt family broke ground in September on a Guthrie lot that will become Prairie Wolf Spirits – founder and distiller Hunter Merritt is having equipment constructed in Germany this fall and said they aim to release a vodka in spring 2013 and gin by the summer, followed eventually (after it ages appropriately) by Prairie Wolf’s house whiskey.

Meanwhile, Garrett Janko of Twister Distillery in Moore is working on plans for a grand opening, buoyed by its additional work on a house vodka and Oklahoma Land Rum; they have permits in hand and are ready to roll. Cheers!

A new installment from the powerhouse partnership of Steve Lackmeyer and Jack Money is now gracing the bookshelves of 50 Penn Place’s Full Circle Bookstore. The journalistic duo have already won multiple awards for their prior works OKC Second Time Around and Skirvin, painstakingly researched pictorial histories of downtown Oklahoma City’s post-1960s renaissance and the venerable landmark hotel. Their newest collaboration, Operation Scissortail, chronicles Devon Energy’s development of the Tower, as well as the revitalized Myriad Gardens, Project 180 and beyond.

“Operation Scissortail provides readers with an understanding of how such a large project was conceived and continued uninterrupted during some of the darkest economic times since the Great Depression,” explains co-author Steve Lackmeyer.

Ten years ago the New York Times quoted a survey to the effect that over 80 percent of Americans feel they have a book in them and they should write it. Well, the clock is ticking. November is National Novel Writing Month, a coast-to-coast creative effort in which aspiring authors begin typing November 1 and aim to complete a 50,000-word novel by midnight November 30. Why? Because it’s in there. Visit nanowrimo.org for details, and good luck.

Holiday Mail for Heroes
Make the season brighter for the men and women who serve and are far from home. Contact the local Red Cross at 228.9500 or visit redcross.org/holidaymail to participate in the letter-writing campaign, which continues through December 7.

The Edmond North High School Symphony Orchestra and conductor Peter Markes are tuning up the viola and the van, and preparing to perform a little something you might call “Excellence in the Key of C (for Chicago).” The Windy City hosts the 66th annual Midwest Clinic – the world’s largest instrumental music education conference – this December, and among the attractions for its 15,000+ attendees is a performance by the Huskies; one of only 12 orchestras selected from across the country to play the Clinic.