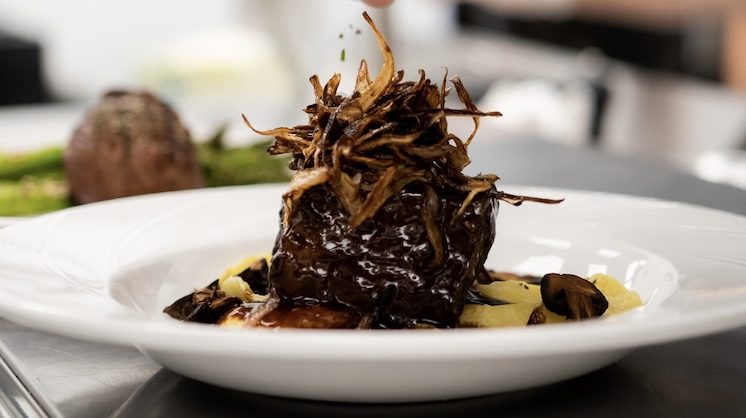 Photo from the Joinery.

The short rib went from obscurity to ubiquity faster than any cut of meat in recent memory. The once humble protein soared in popularity and price simultaneously, with chefs everywhere doing such a stellar job of cooking the dish to tender perfection. What had long been considered an inferior cut of meat suddenly had cache due simply to proper technique, seasoning, and occasionally, a delicious sauce or reduction. Once available for about $2 per pound in grocery stores, the short rib now fetches premium prices in restaurants everywhere. Here then are 10 Short Ribs to Try Now in the 405.

Barrios. The braised beef short rib enchiladas are served with a toasted pasilla sauce and pepitas. The pickled onions help cut through the rich, fatty ribs to balance out a nice dish.

Frida Southwest. Since they opened, the Paseo restaurant has featured short rib empanadas, and they are fantastic. With a beautiful ancho chile glaze and wild mushrooms, it’s not only one of the best short rib dishes in town, it’s one of the best appetizers.

Frida Southwest. Yes, they’re on the list twice, and if you’ve been, you’re not mad about it because they have a short rib entree that’s served with cheese grits, and it’s a must-try dish in the city.

The Hutch on Avondale. The braised short rib is served with a delicious cauliflower puree and Brussels sprouts, so it’s basically good for you (surely).

The Joinery. The new Bricktown restaurant has a beef short rib dish that comes with goat cheese ravioli and a bone marrow bordelaise. It’s as delicious as it is complex.

The Mule. Anyone that puts a short rib on a sandwich has our support. The Angry Texan (they’re from Texas; of course they’re angry) is a barbecue sandwich with a delicious twist, plus onion rings, so it’s an easy yes.

Packard’s New American Kitchen. The beef short ribs are wine braised and served with potatoes and veggies, but the smart move is to sub potatoes for the best succotash in the metro.

Patrono. Not a short rib dish per se, the short rib and wild mushroom mezze is a stellar pasta dish that features OKC-based Della Terra pasta in a tomato basil sauce.

Stella Modern Italian. The short rib ragout has been a fixture on this menu for years because regulars love it so much, they won’t let it go away. Rigatoni pasta, tomato-braised beef, and just enough red chili flakes to give it a kick.